Ahead of KU-Baylor battle of potential No. 1 seeds, Bill Self says Big 12 not top-heavy 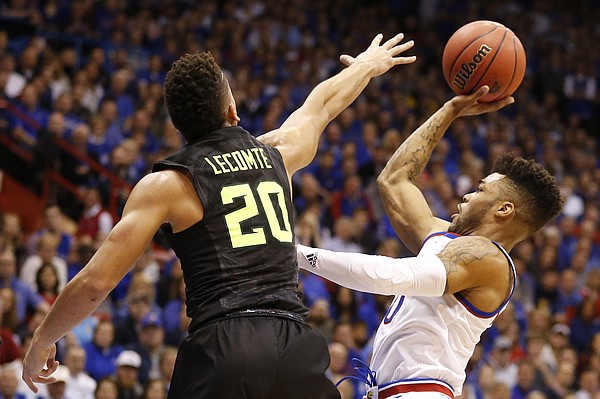 Kansas guard Frank Mason III (0) hangs for a shot against Baylor guard Manu Lecomte (20) during the first half, Wednesday, Feb. 1, 2017 at Allen Fieldhouse. by Nick Krug

When No. 3 Kansas plays at No. 4 Baylor Saturday in Waco, Texas, the nation will be able to tune in (noon, CBS) and check out not only the top two teams in the Big 12, but also two potential No. 1 seeds in the NCAA Tournament.

Still, KU coach Bill Self doesn’t want those unfamiliar with the conference to get the idea the Big 12 is top-heavy. Ahead of the marquee meeting at Ferrell Center, Self shared Thursday afternoon he thinks “the strength of our league is the middle of our league.”

To his point, the five teams trailing the Big 12’s top three — KU, Baylor and West Virginia — in the standings all have a shot at making The Big Dance in March, too.

“The difference between the middle and the teams that are perceived to be at the top is not very much at all,” Self said, “as evidenced by (Baylor’s) scores and also by our scores.”

Baylor just lost at Texas Tech this week, and in February one-possession games dropped one at home against Kansas State and beat Oklahoma State, in Stillwater.

KU, as you’ll recall, only won by a single point at Texas Tech this past Saturday, clawed its way to a three-point victory at rival K-State and suffered a rare Allen Fieldhouse defeat at the hands of Iowa State during the past couple of weeks.

“I do think it’s a monster league,” Self said, “because 18 games, round-robin, and even home games, as you guys well know with us, they’re not a cinch by any stretch.”

The overall quality and depth of the Big 12 could get as many as eight teams into the NCAA Tournament in March, depending on how the next few weeks play out. As of Thursday, ESPN’s Bracketology projected seven Big 12 teams in the tourney:

Texas Tech: “Next four out,” behind “first four out”

The NCAA Tournament selection committee identified Kansas and Baylor as No. 1 seeds (as of Feb. 11), this past Saturday. Self said, in the case of this year’s Big 12 makeup, there isn’t a “bottom-heavy” factor, where teams such as Kansas and Baylor can pencil in three or four automatic victories.

Coach Socrates — oh, sorry, Coach Self, that is — said the Big 12 may be undervalued by outsiders because “the appearance of parity breeds the thought of mediocrity.” In the conference KU calls home, though, nothing comes easily this season. Just look at the average margin of victory for the top two teams in the league: Kansas (11-2 in Big 12) is at +4.1 and Baylor (9-4) at +3.9.

“But having two teams this late in the year,” Self said, “that are projected as one seeds — and even though we KNOW that that’s gonna change from week to week — I think speaks well for our league.”

Hard to disagree with these thoughts. Does anybody think we win by 15+ in Austin or home to TCU? Not me.