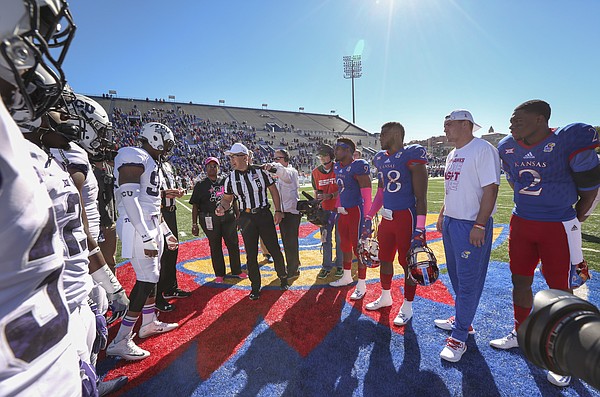 The Jayhawk and Horned Frog captains meet at midfield for the coin toss prior to Saturday's game. On hand to flip the coin as part of "Jayhawks for a Cure" day was Carla Arnick, standing behind the official, who is a breast cancer survivor and mother of Kansas linebacker Courtney Arnick, third from right. by Nick Krug

Senior University of Kansas linebacker Courtney Arnick didn’t exactly need extra motivation Saturday in his second start of the season. But Arnick found some anyway before the game when his mother, Carla, joined him and KU’s other captains at the 50-yard line for the pre-game coin toss.

A survivor of breast cancer, Carla seemed the perfect choice to help represent the team on its “Jayhawks for a Cure” day, against TCU. Kansas players incorporated pink accessories into their uniforms for their first game during Breast Cancer Awareness Month. Carla wore a pink hat and her T-shirt featured her son’s No. 28 in pink on the back.

“Having my mom with me at the start of the game, I’ve never experienced that before. And I know it meant a lot for her, and on top of that I just lost my godmom (Veronica Harris) to breast cancer not too long ago,” Arnick shared following KU’s 24-23 loss to TCU. “… I just tried to do what I could for ’em.”

In fact, Arnick went out and made a season-high nine total tackles and two tackles for loss as the Jayhawks (1-4 overall, 0-2 Big 12) nearly pulled off the upset.

“I feel like we always play hard, but I feel like it showed up this time,” Arnick replied when asked if the narrow defeat marked KU’s best defensive effort to date this season.

Starting linebackers Marcquis Roberts and Joe Dineen missed the game due to injury, yet Kansas experienced little to no drop-off in defensive intensity. A fifth-year senior from Dallas, Arnick said he, senior defensive end/linebacker Cameron Rosser and sophomore linebacker Keith Loneker Jr., who sat out last season after transferring from Baker, felt no pressure filling in.

“We’re older guys, so it’s kind of expected,” Arnick said. “Kind of just get the juices going on the team, get the energy going and just step up when we need it.”

Arnick, whose 22 total tackles this season now only trail senior safety Fish Smithson’s 24 for the team lead, was just happy to produce on a special day for his family.

“She was pumped up,” he said of his mother, Carla. “My mom is a big college fan. She keeps up with every game, from my game to every Big 12 game, whoever. If I mess up she’s on me about it worse than my coach, so she was pretty energetic about it. I messed with her a little about it, ‘Hey, you can’t mess up. You’re on TV,’ and stuff like that, joking around with her. But it was a pretty big deal for her.”