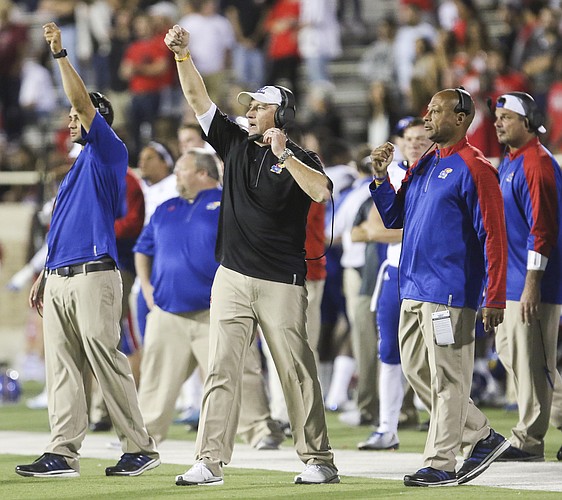 After his Kansas football team lost at Texas Tech last week, head coach David Beaty claimed he had no problem maintaining a two-quarterback approach, and made it clear he’s kind of over people asking him about it.

But the Jayhawks’ second-year coach might have been closer to sticking with one quarterback this past Thursday at Lubbock, Texas, than many realize.

During the first three games of the season fourth-year junior Montell Cozart started for KU, and the Big 12 opener proved no different. However, during the non-conference portion of the schedule a rotation pattern emerged. Cozart played the first two possessions of the game, then sophomore backup (or QB No. 1B, if you prefer) Ryan Wilis entered for the third. Where the rotation went from there varied somewhat from game to game, but the opening offensive strategy remained the same.

That changed, though, in what turned out to be a 55-19 loss to the Red Raiders.

Cozart played the first two series, as usual, then returned to the field for possession Nos. 3 and 4. Willis didn’t take over the offense until the second quarter, on the fifth possession of the game.

Keep in mind this is just a theory, but it sure seemed as if Beaty was prepared to keep Cozart on the field and abandon his swapping in and out approach at Tech. A 14-0 deficit and four consecutive fruitless drives appeared to force Beaty’s hand: 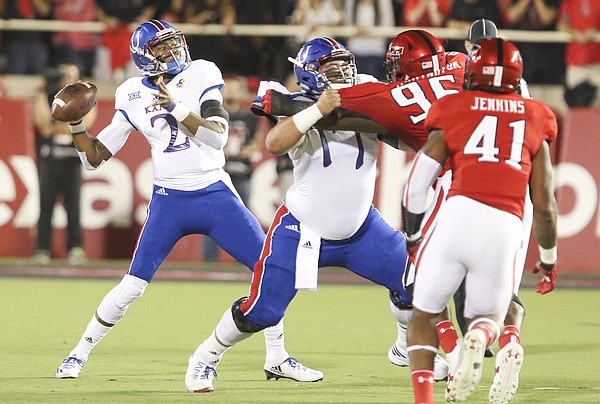 Kansas quarterback Montell Cozart (2) pulls back to throw during the first quarter on Thursday, Sept. 29, 2016 at Jones AT&T Stadium in Lubbock, Texas. by Nick Krug

Cozart’s first-quarter struggles — 4-for-13 passing for only 36 yards — meant Beaty would have to be crazy to stick with him at that point, especially after the Jayhawks (1-3 overall, 0-1 Big 12) had so readily used multiple quarterbacks this season.

I asked Beaty during the post-game press conference whether his plan all along was to wait until the second quarter to insert Willis.

After pausing for several seconds, the coach responded:

“I’m not really wanting to talk about our plan. We know what we’re wanting to do with our guys and obviously we have two guys we know right now are very capable to run our offense … run the whole thing. And we’re not unlike a lot of other teams. We’re trying to go off what we see when we get to the game, too. And from that point you’ve got to make the decision based on what’s best to help you move the football.”

This came after Beaty had defended the two-QB scheme, saying the decision to take that route comes from what he and his staff see at practices. This response seemed to shed more light on the process, though, as he referenced evaluating in-game performance. After a quarter full of punting, Kansas had to switch to Willis. 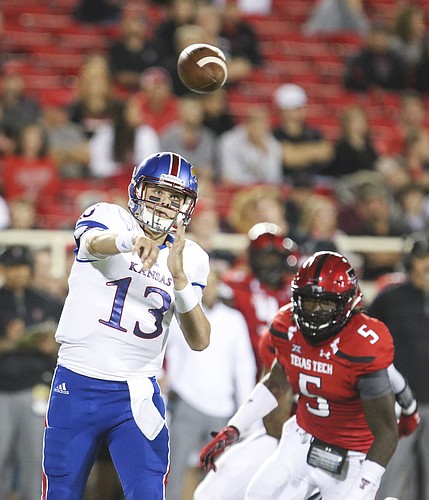 Kansas quarterback Ryan Willis (13) heaves a pass to the flat during the fourth quarter on Thursday, Sept. 29, 2016 at Jones AT&T Stadium in Lubbock, Texas. by Nick Krug

Later in the same session with reporters, Tom Keegan asked Beaty about the upsides and downsides of using two quarterbacks instead of picking just one. KU’s quarterbacks coach and offensive coordinator reiterated his line of thinking that the team lacks a “crystal clear” No. 1 QB. Then Beaty said something else that makes one think he wanted to hand the job to Cozart at Tech, before a lack of production forced the coach to return to what has become the offense’s status quo.

“On our standpoint right now,” Beaty said, “if a guy would get in there and he continued to produce then you would stay with him. But if a guy doesn’t do that then you continue to work and try and continue to find the answer.”

Give the man credit for not stubbornly sticking with Cozart. Willis took over quarterbacking duties at Tech and seemingly would’ve remained behind center until the game was decided had it not been for a small injury scare in the third quarter that forced him to the sideline for part of a series. Oddly enough Cozart came in to lead a touchdown drive.

It turned out neither Kansas quarterback left the Thursday night loss with good numbers. Willis finished 14 of 26 for 142 yards and a touchdown, while Cozart went 9-for-20 for 97 yards, a TD and a late-game interception (with KU trailing by 29 points).

Personally, I don’t think Willis handled sitting the entire first quarter well. The blame for that goes on Beaty as much as the QB. Willis’ throws were off once he finally entered the game, with incompletions on three of his first four attempts. It wasn’t until late in the second quarter that he finally looked comfortable. But even after connecting with freshman receiver Chase Harrell for an 18-yard score, Willis had incompletions on his next four passes.

Who knows at this point whether Willis or Cozart will start this week against TCU. But, as has been stated before, it sure seems as if Willis would benefit from starting a game and being allowed to play through it without fear of being replaced. If the sophomore doesn’t produce, you can always try something else the following week.

Ideally, though, the offense needs to discover some semblance of stability.

Well all I have to say is that Cozart looked more awful than Willis. Not to say Willis played well, just seemed to be the better of two bad options. Still don't think Carter Stanley would make any better of an impact. I'd go to Willis for all four quarters next game.

I don't get a single thing that's happening with our quarterbacks or coach's comment that "we have two guys we know right now are very capable to run our offense "...because I'm not seeing one, let alone two. Texas Tech is like the 7th best team in the Big XII and I never felt like we had a chance!

Willis would have been that guy, I believe, if Beaty made a commitment to him. But I agree with you at the moment, that the words "very capable" as applied to any quarterback on the roster running the offense is hard to justify from what has been seen...especially with Montell Cozart.

Yeah, I agree with the part about Willis, too...

It just gets curiouser and curiouser. Not better.

Quick, name me three successful teams in the country who are swapping QB's on a regular basis (other than 18-wheeller-type packages). The fact that he wanted to go with M.C. is simply mind-boggling. Difficult to describe a worse way of managing the position

Pick a friggin' quarterback! My goodness.

It's like he's living in an alternate universe from the rest of us. His continuing choice of Cozart as his starting QB is mind-boggling.

His alternate universe is the practice field where Montell apparently excels. It goes back to the article that (Tait?) wrote a couple weeks ago about how Montell actually plays half way decent against lesser opponents, but starts to fail badly against B12 caliber competition. Probably the biggest down side of when Montell got hurt last year is that he really didn't face much B12 competition, and his stats were actually better than Willis' stats.

The problem here isn't nearly as much a matter of Coach's indecision or bad decision, as it is of practice Willis not being better than practice Cozart. If you can't be better than that, then you're really not a B12 QB and therefore not the answer either.

Not that Coach Beaty would ever come close to even thinking much uttering those words. He's just hodge-podging together what he hopes will be successful based on what he sees most of the time - practice. Yes, a veteran coach might be able to differentiate things better, but in the end it's not likely to make that great a difference. We're still a young, 60-some man team of players trying to be over achievers.

A couple months ago we all understood this - I hope.

I don't care how the guy practices, in a game he is lost. If Beaty can't see this after 2nd year he is poor judge of talent. Willis is ok but can't run and we need a runner. Convert one of our rbs and run the wildcat. Sure as hell couldn't do any worse!

The wildcat doesn't use our greatest assets - the WR's being developed. That's a lot worse.

Beaty is showing the kind of decision making that get head coaches fired. But his decisions may bring Zenger down too. Can not believe that we are still debating whether or not Cozart should start.

Joe have to agree way too much energy being wasted on this subject.

Wow off the subject great block on that picture. HOLDING at its finest. We can't block either.

Even though I am a Willis supporter I guess we will find out this Sat. Not sure the rest of our opponents will give us much of a chance, but then again we are not going in with a confident QB.

Our OL is not very good, but as far as holding is concerned, it happens every play, just a matter of when the refs decide to call it.

We do need to remember that not much was expected this season. It is difficult, but I am behind the Jayhawks all the way, win or lose.