When Wayne Selden Jr. opted to undergo a procedure to fix a “small” meniscus tear in his right knee, it meant the junior shooting guard from Kansas wouldn’t be able to, you know, play basketball at the NBA Draft Combine.

Theoretically, Selden could have helped his draft status — like teammate Cheick Diallo did — by going through drills and making plays in scrimmages. Maybe the 6-foot-5 guard could have impressed enough scouts and coaches to establish himself as a likely first-round pick.

Instead, Selden will have to try and bust into the first round the hard way, as he works out for various organizations in the weeks to come.

At this point, Selden is projected to go in the middle of the second round. DraftExpress currently slots Selden at 47th, to Orlando, and NBADraft.net guesses Boston will take the Roxbury, Mass., native 45th.

While at the combine last week, when Selden wasn’t having some fun with Georges Niang, he got measured (8-foot-5 standing reach, 6-10.5 wingspan, 6-5.75 height in shoes, 6-4.25 height without shoes, 232.4 pounds, 7.3% body fat, 9.25 inches hand width, 9.0 inches hand length) and interviewed with a number of teams. Selden told BasketballInsiders.com he interviewed with representatives from Indiana, Dallas, Charlotte, New York, Denver “and a few other teams.” 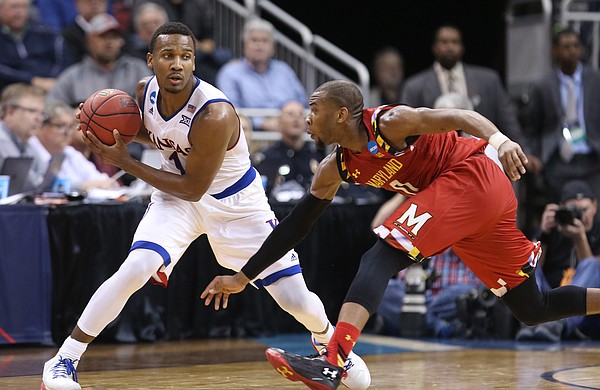 After going through the process of finding an AAU home and a college basketball program, Selden said the process wasn’t too overwhelming.

“But this time you don’t pick,” he added of the biggest difference heading into the next stage of his basketball life.

Selden said his trip to the combine was a step toward achieving his dream, but his knee injury made it tough for him.

“You wanna get out there and always want to be able to compete and stuff like that,” Selden said. “But I’m not trying to rush anything, so I’m just gonna take my time, and when I’m ready I’ll be out there.”

According to Selden, his basketball workouts are already back to “almost full speed,” but the possibility of contact while playing setting him back forced his decision to sit out.

“I’m about two to three weeks out,” he said of returning to normal basketball activities and being able to show off the athleticism that made him stand out at Kansas.

In the weeks leading up to the draft, while trying to prove he can contribute to an NBA team, Selden hopes his “uber-competitive” nature and work ethic will come across to coaches and executives.

Asked to name current or former players he tries to emulate, Selden explained his approach to becoming a successful shooting guard at the next level.

“Not really modeling too much,” Selden said, “but I’m looking at a lot of different film now on guys like Nick Anderson, Mitch Richmond, Dwyane Wade, Michael Finley, just different guys like that, just trying to pick different things from those guys.”

Selden, who played three seasons at KU, said his time in Lawrence prepared him well for the pre-draft process.

“It made me a man,” the 21-year-old said, “and, you know, especially at Kansas with the media attention we get and stuff like that. And coach wasn’t easy on us, and I had to grow up there. And it really prepared me for this moment.”

We’ll continue to track Selden’s journey toward the draft, as well as the stock of KU players Diallo, Perry Ellis and Brannen Greene, in the weeks ahead at KUsports.com.