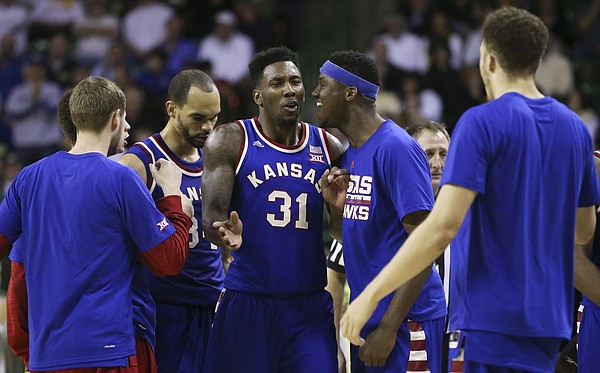 Kansas forward Jamari Traylor (31) gets an earful of praise from Kansas forward Carlton Bragg Jr. during a timeout in the second half, Tuesday, Feb. 23, 2016 at Ferrell Center in Waco, Texas. by Nick Krug

Jamari Traylor has watched closely from nearby as a Kansas basketball team made a deep run through the postseason. An NCAA partial qualifier, Traylor sat out his first year in Lawrence, only practicing in the spring semester with what turned out to be a Final Four squad.

But the senior power forward from Chicago never has personally contributed to anything better than a Sweet 16 berth for KU in 2013, his freshman season. Back then, Traylor didn’t have Bill Self’s trust like he does now. Traylor played a combined 13 minutes as the Jayhawks moved past Western Kentucky and North Carolina, and lost to Michigan. He took three shots, made two of them, scored four points, but didn’t even collect a rebound.

Each of the following two seasons, Traylor’s role increased, but Kansas faltered early in March Madness, exiting with just a single tourney victory in both 2014 and 2015.

Traylor, like the most of his teammates, struggled to score inside (1-for-8 shooting) in a 60-57 second-round loss to Stanford his sophomore year, two days after dominating against Eastern Kentucky, with 17 points and 14 boards.

Arch sadness: KU's season ends in St. Louis, in round of 32 by Gary Bedore KUsports.com

As a junior, Traylor’s season concluded with him contributing four points (2-for-5 shooting) and five rebounds off the bench as KU lost, 78-65, to Wichita State.

Bounced: Shockers do as they please, send Jayhawks home by Gary Bedore KUsports.com

Those back-to-back Round of 32 losses don’t fall solely on Traylor’s broad shoulders, of course. KU’s core of veterans — Perry Ellis, Wayne Selden Jr. and Frank Mason III — also played key roles in those season-ending head-scratchers. But Traylor takes ownership in the program’s successes and shortcomings. That’s one reason why, as the Jayhawks head into the postseason this March, the 6-foot-8 leader senses this team can actually live up to KU’s lofty expectations. 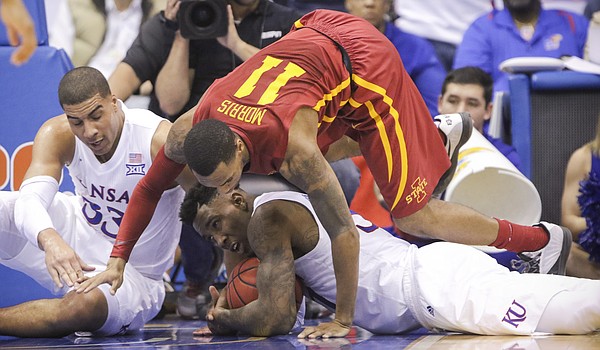 Iowa State guard Monte Morris (11) falls on top of Kansas forward Jamari Traylor (31) as Traylor slides to secure a loose ball during the second half, Saturday, March 5, 2016 at Allen Fieldhouse. At left is Kansas forward Landen Lucas (33). by Nick Krug

“It’s pretty much a different feeling,” Traylor said of the vibe, compared to the other KU teams he has played for. “I feel like we’ve got a group of guys who’s a little more hungry. We’ve tasted defeat in the postseason, so we know what’s around the corner for us. I’m a senior now. Perry’s a senior now. So we know it’s our last opportunity, so we’re more locked in.”

Even before the season began, Traylor thought the final Kansas team he played on could be as good defensively as the one he watched reach the 2012 national championship game.

What’s more, the closer the KU’s veterans get to the NCAAs, the better their defense looks. In Big 12 play, the Jayhawks held opponents to 39.2% shooting. No other team registered better than 42.9% — by both West Virginia and Oklahoma State.

KU’s improving defensive effort, coinciding with the emergence of junior big man Landen Lucas, is a sign of the hunger Traylor described.

“As a younger team, I guess guys probably could feel like we could come back next year or come back the year after,” Traylor explained of the more youthful KU rosters who fell short in past postseasons. “We don’t have that opportunity. I feel like we’re more focused in and we’ve just gotta be in tune, because we know one bad mistake or one bad game we can be over.”

In March, intangibles tend to push teams closer to a Final Four. Self pointed to an immeasurable characteristic when asked what he admired most about this year’s Jayhawks. 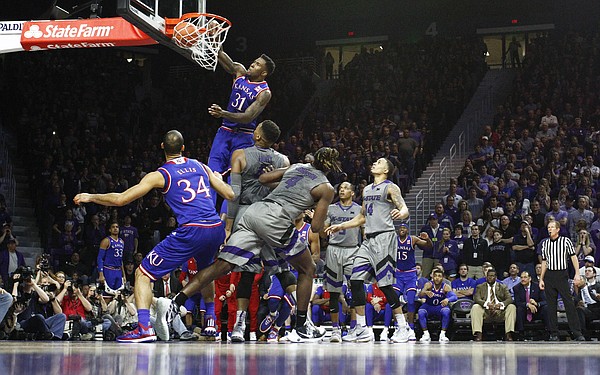 Kansas forward Jamari Traylor (31) hammers home a dunk against Kansas State during the second half, Saturday, Feb. 20, 2016 at Bramlage Coliseum in Manhattan, Kan. by Nick Krug

“I would say, I would probably never give my teams that much credit for being pretty tough, but I think they are pretty tough in crucial situations,” Self said. “I think that they usually — not always — usually rise to the level of what needs to be done at that particular moment, and, you know, they like each other.”

Ellis may be best known for his soft shooting touch from inside and outside, but Traylor noticed the team’s leading scorer getting tough in the final minutes of KU’s regular-season finale, an 85-78 home victory over Iowa State.

“He’s just a winner,” Traylor said of Ellis. “The last play you could tell, because he put it all out there. He dove on the court. It was the defining moment for the game. It just shows how much you want to win if you do that.”

Traylor, Ellis, Selden and Mason all will have plenty of chances, beginning this weekend at the Big 12 Tournament, to prove with their play if March victories mean even more to them now than they did in the past.

To be a leader requires positive action. Unless Traylor suddenly plays a bigger role we need to look at Mason or even Graham to spark this team. Many are wondering if Mickelson might be a better big guy to protect the goal rebound and play defense. Yes he has been more of a positive force recently lets see if that can improve and be a factor in the teams success.

Choosing between Jamari and Hunter depends on matchups as well how many minutes Landon stays in the thick of things without fouling (matchups again). I have also noticed freshman bigs getting spot minutes to (I hope) be ready for emergency duty.

I hope Mari's right. 20 years was too long for so many great teams to go without getting a title. We've got a great shot at it this year. Put in the work. Get it done. Rock Chalk!

Roy had the "monkey on his back" for about 10 years as coach and couldn't get us past the Elite 8, and most of the time we stalled before that. However, in '97, if Haas is not injured, we probably beat AZ and get the title.

For Self I don't think its as pathological... its just bad luck... a healthy Embiid gets us to the FF... we beat Michigan in 2013 and we are probably playing in NC game again...something wasn't right with EJ in that game. We were banged up last year at the end.

'97 team was great but I think his best shot was 2002. The team went 16-0 in Big 12 play. Gooden was averaging 20pts and 12 rebounds a game with Collison next to him avg 16 and 9. That's 36pts and 21 rebounds from the post every game. Add to that Kansas leading assist leader in Aaron Miles and 4 more of the top 15 scorers in KU history with Boschee, Hinrich, Simien, and Langford. Man, that team was stacked.

"Traylor played a combined 13 minutes as the Jayhawks moved past Western Kentucky and North Carolina, and lost to Michigan. He took three shots, made two of them, scored four points, but didn’t even collect a rebound." How is that even possible?