Getting to know the 5th-seeded Maryland Terrapins

Losses in four of their final six regular-season games hurt Maryland’s chances of entering the NCAA Tournament in the enviable position of playing as a top-three seed.

Now that the Terrapins (27-8) got through the first weekend unscathed as a No 5 seed in the South region, seed lines and late-season blips don’t matter.

Maryland might have entered the Big Dance ranked No. 18 in the AP Top 25, but Kansas coach Bill Self said the Jahawks’ Sweet 16 opponent Thursday night in Louisville looks more than capable of living up to its early-season expectations under fifth-year coach Mark Turgeon.

“I think we're catching a team that even though they're seeded fifth,” Self said, “our guys understand they can play to a one seed. So this is a hard — this is really a hard matchup — because we really think a lot of their team.” 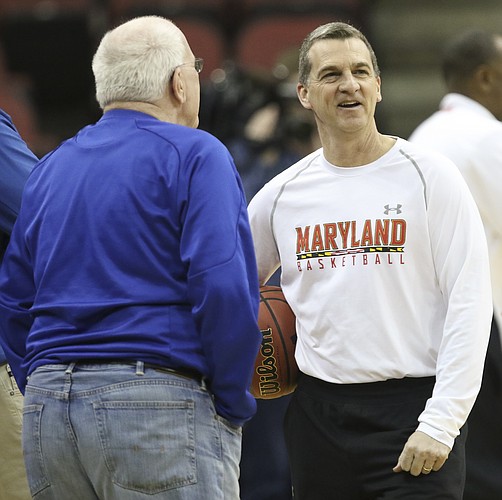 The Terrapins, even with their late slide, finished 12-6 in the Big Ten, good enough for third place (behind Indiana and Michigan State). They were the only team in the conference with five players averaging double figures in scoring.

Junior Maryland forward Robert Carter Jr. said the team’s length inside and out has led to its success this season.

“We have really talented guys at every position,” Carter said, “even coming off the bench. It just helps us in general. Just guarding other teams and just helps us dominate guys.”

In recovering from a disappointing end to the regular season, the Terrapins had the help of a former Final Four Most Outstanding Player, Juan Dixon. Now a special assistant to Turgeon, Dixon led Maryland to a 2002 national title, which came a few weeks after North Carolina State upset the Terps in the ACC semifinals.

According to Carter, Dixon told the current Maryland players about that setback and emphasized re-focusing and making a postseason run still was possible.

“He sees a lot,” Carter said of Dixon. “We just always go to him and pick his brain about what he’s seeing. He understands the game and it’s cool to get that opinion from somebody who not too long ago finished playing.”

The Terps beat South Dakota State by four in the first round and Hawaii by 13 in the second round. They’ll have to get hot from deep (36.7% on 3-pointers this season) to open things up offensively and give themselves a shot at knocking off Kansas.

Maryland has plenty of length and skill to throw at the Jayhawks (32-4). With the help of a little scouting report from Carter on the starters, meet the Terrapins KU will have to hold back in order to advance to the Elite Eight. 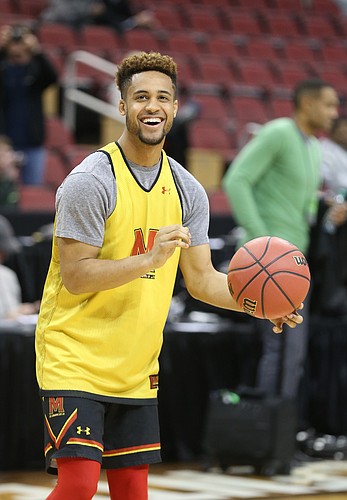 Maryland guard Melo Trimble (2) laughs as he pulls up for a three during practice on Wednesday, March 23, 2016 at KFC Yum! Center in Louisville, Kentucky. by Nick Krug

- hoop-math.com nugget: Almost half of Trimble’s shot attempts (47.6%) come from 3-point range, so for all the talent and 1-on-1 ability he has, he can be coaxed to stay outside when working with the ball, off of screens. The key is contesting him when he fires from deep.

- Carter’s report: “He’s a dominant player. He always draws attention from other teams because of how well he can score the ball, how he can get to the basket. And he makes shots.” 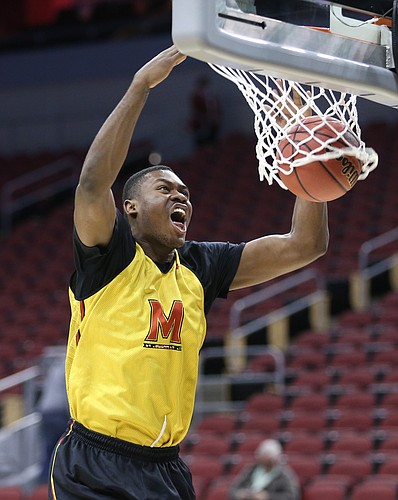 - hoop-math.com nugget: Of course the talented young big man who projects as a first-round draft pick leads Maryland in put-backs (36). Stone shoots 73.5% on shots at the rim and that’s where he takes 54.8% of his attempts. On 2-point shots away form the rim, Stone’s shooting percentage drops to 36.6%.

- Carter’s report: “He’s also a big-time player. He can score the basketball and he can block shots defensively. He’s dominant.”

“He can wear you down, but he’s also skilled.” 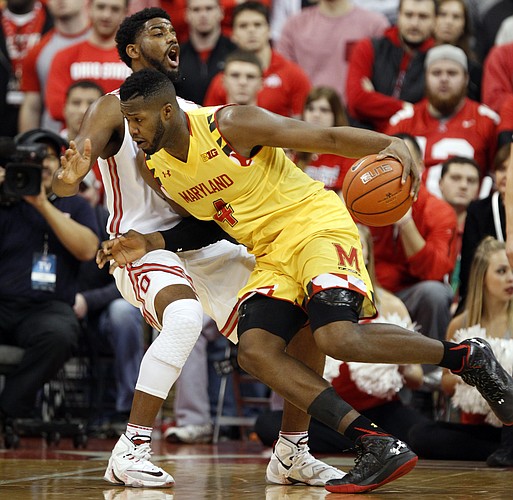 - Carter’s report: “I’m just a versatile guy, do a bunch of different teams on both ends. I guard multiple positions. On offense I stretch the floor or post up, things like that.” 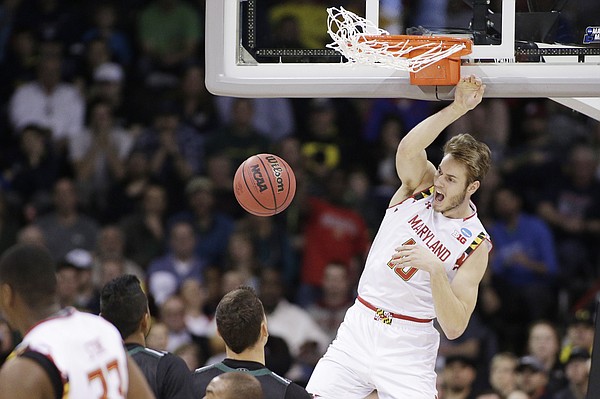 Maryland forward Jake Layman (10) dunks during the second half of a second-round men's college basketball game against Hawaii in the NCAA Tournament in Spokane, Wash., Sunday, March 20, 2016. (AP Photo/Young Kwak)

- hoop-math.com nugget: Perhaps the most effective scorer on the roster, Layman leads Maryland in true shooting percentage (0.645) and finishes strong inside — 78.9% on shots at the rim.

- Carter’s report: “He does a little bit of everything. He dabbles. A shooter, he’s a big wing, he can post up. He can do a lot of different things.” 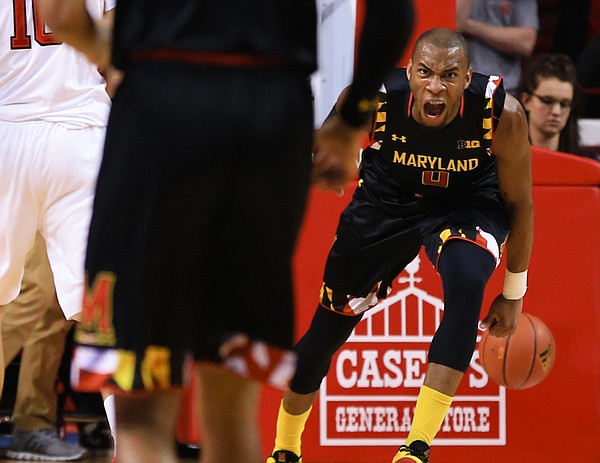 Maryland's Rasheed Sulaimon (0) reacts after a dunk during the second half of an NCAA college basketball game against Nebraska in Lincoln, Neb., Wednesday, Feb. 3, 2016. Maryland won 70-65. (AP Photo/Nati Harnik)

- hoop-math.com nugget: Sulaimon rarely ventures inside, preferring instead to take 45.1% of his shots from beyond the 3-point arc. He makes 35.8% of his 2-point jumpers.

- Carter’s report: “He’s a three-point shooter. He brings defensive toughness. He’s one of the guys that plays really hard all the time. He’s just one of our emotional leaders.”

“He just defends and defends hard. He defends anybody coach puts him on and he just tries to play hard and get his team a win, any way possible.”

Pregame reading from @PhillipSuitts on how Jared Nickens broke out of his slump. He could be big tonight https://t.co/Kdz6xartJ3

None by Ryan Baillargeon

- hoop-math.com nugget: Talk about 3-happy. Nickens has taken 84.4% of his shots from downtown. All year long, he has taken 7 shots at the rim, making 4.

Damonte Dodd labels himself one of the best shot-blockers in the nation. He's swatted 8 shots in the past 2 games https://t.co/R8UX6Ukxpt

None by Ryan Baillargeon

- hoop-math.com nugget: When one of Maryland’s more heralded players draws the attention of the defense, Dodd knows how to make himself available. He takes 68.3% of his shots at the rim and has been assisted on a team-leading 67.9% of his 43 attempts from point-blank range.

Look like we will call on Svi's length and scoring touch. Also our young bigs better be ready for some extended playing time if fouls are a factor. Perry needs to draw their bigs out and the team will have to be shooting lights out.

We need to get their bigs in foul trouble.

That would be solid.