The Most Outstanding Player at the 2002 Final Four, Juan Dixon, now a special assistant to Mark Turgeon at Maryland, can tell the Terrapins are starting to do all the little things right in March.

Dixon says the Terps, who face Kansas on Thursday in a Sweet 16 matchup in Louisville, Kentucky, will have to keep making hustle plays to compete at the highest level against the Jayhawks.

In the 2002 national semifinals, Dixon scored 33 points against KU before Maryland went on to beat Indiana for the national title. Dixon, as of Wednesday afternoon at least, hasn’t shared any stories with Maryland players about his 33 points versus Kansas at the Final Four.

A national champion playing for Gary Williams, Dixon says Turgeon, now in his fifth season with the Terps, has built the program back up. 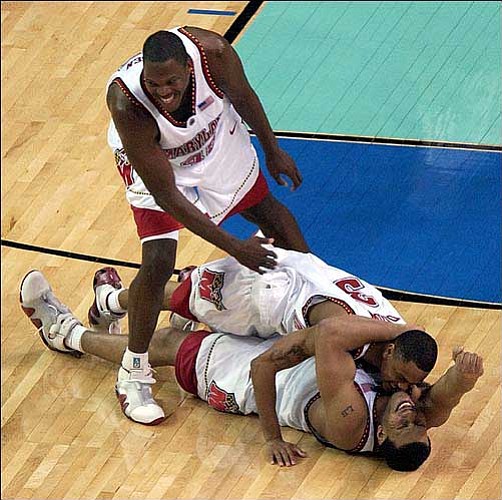 “He’s leaving his mark here on this Maryland basketball program,” Dixon says. “He’s gonna continue to do his best, and this program is on the rise.”

As crazy as it may sound, Dixon says he gets more nervous about games now, as an administrative staff member, than he did as a player. Against Hawaii in the second round, Maryland got off to a slow start and Dixon started feeling butterflies in his stomach.

“Hopefully it will be a little bit cleaner tomorrow,” Dixon says, looking forward to the Thursday night meeting with Kansas. “You know, we can play Maryland-type basketball, the type of basketball Coach Turgeon has been teaching these guys since Day One. I’m looking forward to tomorrow night.”

Occasionally, Dixon admits he finds himself looking back at his NCAA Tournament success when he sees the Terrapins doing so well this March, with Maryland advancing to its first Sweet 16 since 2003 — the year after he graduated.

Dixon says some programs take getting to a regional semifinal for granted, but it isn’t easy.

“I was fortunate enough to go to the Sweet 16 three times, but it’s really, really hard,” Dixon says. “Coach Turg and the staff, they’re building the program to get to this point on a consistent basis.”