With the NBA Draft quickly approaching, it seems Cheick Diallo’s name might continue its steady climb up mock drafts and big boards.

Prior to the Draft Combine, the 6-foot-9 Diallo, who seldom played at Kansas in his one season, looked like a borderline first-round pick, with many prognosticators assuming he wouldn’t be selected until Round 2.

In DraftExpress.com’s latest offering, Diallo has broken out of the 20’s range, with Denver selecting him 19th.

Here’s a quick look at where other sites predict Diallo will go, with the draft just more than two weeks away:

As ESPN’s Jeff Goodman recently explained in a draft profile on Diallo for the Celtics’ website, the forward’s ability to get up and down the floor faster than his competition began to intrigue scouts, coaches and general managers, once he really put his skills on display at the combine, in May.

“That’s what Cheick Diallo does. He plays hard,” Goodman said. “He’s a power forward who always played with energy. He rebounds, he blocks shots. Not a big-time scorer, but at the combine he showed that he could make some shots, so I think that surprised some of the NBA guys in Chicago, that he was able to do a little bit more away from the basket, because really what they saw in limited time at Kansas was just kind of cleaning up garbage points around the basket, finishing down low, scoring on put-backs, blocking shots again and running the court hard all the time, which is what he does.” 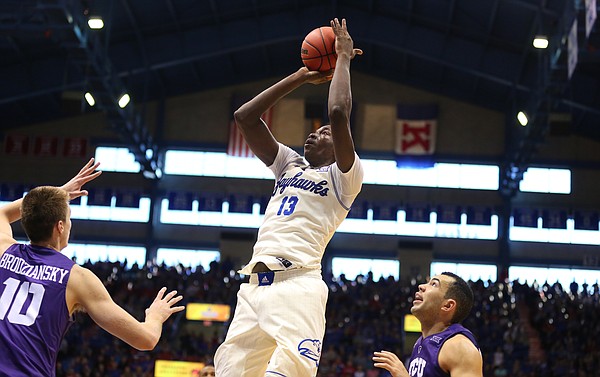 Kansas forward Cheick Diallo (13) pulls up for a jumper over TCU forward Vladimir Brodziansky (10) and guard Michael Williams (2) during the second half, Saturday, Jan. 16, 2016 at Allen Fieldhouse. by Nick Krug

As has been well documented, Diallo only averaged 3.0 points and 2.5 rebounds while playing 7.5 minutes a game for the Jayhawks. Goodman thinks once the wiry-strong big stepped into the spotlight of the combine’s scrimmages he was better able to showcase his strengths.

“… He felt freedom that he wasn’t going to be pulled after a bad play like he was at Kansas with Bill Self, that he could go out there and just play the way he did back even in AAU basketball, where it was up and down,” Goodman said. “And that’s where he thrives, getting him up and down in a setting where they’re not running as many plays right now, and that’s where Cheick Diallo shows what he does well, which again, he’s kind of got some Ben Wallace to him from back in the day, where he’s just a ferocious rebounder who again plays with that high energy, that high motor.” 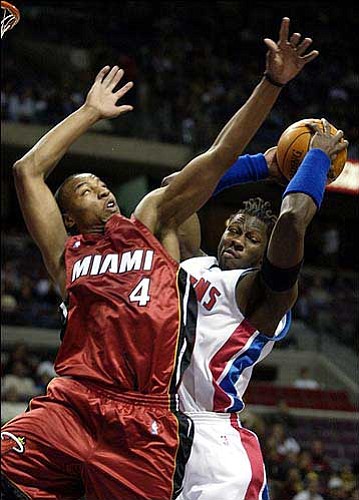 If Diallo ever does turn into a savage rebounder and defender such as Wallace or a high-energy rotation post player in the mold of Toronto’s Bismack Biyombo, the team that drafts him will be elated. Still, the wait-and-see process for Diallo, who remains a project, will take some time.

Goodman said Diallo would fit the toughness and defensive mentality of the Celtics, and the system of coach Brad Stevens. However, it’s not as if Boston or any other team would plug the 19-year-old right into its rotation.

“It’s gonna take probably three years to see the real Cheick Diallo and what he can do on both ends of the court,” Goodman said. “But right now you can put him out there and you know he’s gonna go hard. … The key again is the mental part of the game for him. He’s only been playing basketball for about five years. So it’s really still picking up the nuances of the game, rotations defensively, that’s gonna be the hardest part for him to adjust to the NBA game.”

Obviously, one easy way for Diallo to develop as a young pro will be trips to the D-League. Goodman doesn’t expect to see Diallo playing many NBA minutes during his rookie season. 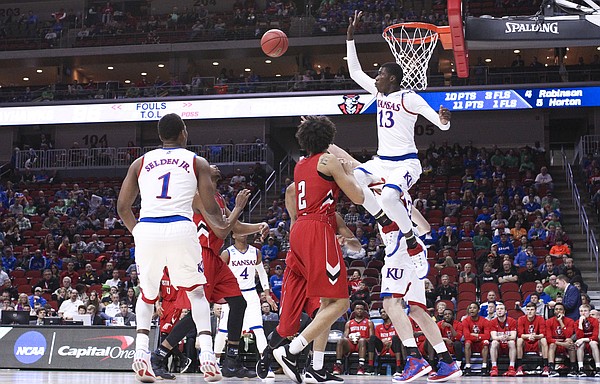 Kansas forward Cheick Diallo (13) gets up to reject a shot during the second half, Thursday, March 17, 2016 at Wells Fargo Arena in Des Moines, Iowa. by Nick Krug

“You want to get him as many reps as possible. You do that in the D-League,” Goodman said. “He’s a guy that again in three years you hope can become a rotation guy, maybe even a starter.”

Just as Self often praised Diallo for his maturity and how he handled an unfavorable situation during his one year of college basketball, Goodman liked the way Diallo reflected on his short time with the Jayhawks.

“This is a kid that easily could’ve thrown Kansas under the bus for not playing him when he was a top-10 recruit,” Goodman said. “He never did that, where Cliff Alexander did it a year ago. Instead, he really put the onus on the NCAA and said, ‘Listen, I wasn’t cleared. I was fighting from behind, and that’s why I only played seven and a half minutes a game. It wasn’t Bill Self’s fault. It was really the NCAA not clearing me in time.’

“So he’s still got that mentality of wanting to prove people wrong,” Goodman added.

It's great news that Diallo's choice looks like it will work out fine.

Goodman's definitely right about Diallo not throwing KU under the bus like Alexander did. It's also unfortunate if he truly did feel so nervous about getting pulled out of the game that he couldn't play the way he was capable of. Sure, you need to play the right guys but you gotta give guys, especially freshman, time to get used to college ball too. Perhaps Self's hook was a little too quick with Cheick.

On HCBS's priority list, Chieck catching up for the lost third of the season looked like a two-three year project. Neither Diallo or Self got down on each other, which is a very positive thing to say about both of them.