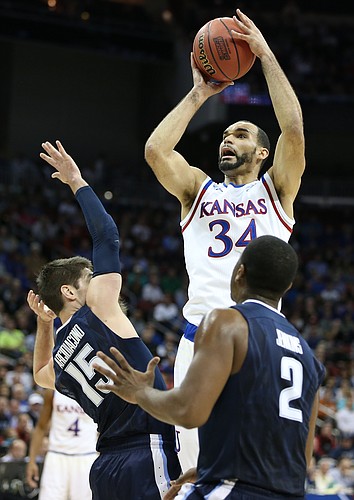 Kansas forward Perry Ellis (34) gets up for a shot over Villanova guard Ryan Arcidiacono (15) during the first half, Saturday, March 26, 2016 at KFC Yum! Center in Louisville, Kentucky. by Nick Krug

When the 2016 NBA Draft came and went without Kansas forward Perry Ellis getting selected in the two-round, 60-pick extravaganza, there was no need for the 6-foot-8 prospect to panic.

A rookie free agent, Ellis knew he would soon be weighing his options as his agent tracked down possible contract offers or opportunities to play in the NBA Summer League. Sure enough, Dallas added the Wichita native to its summer roster less than 24 hours after the conclusion of the draft.

A summer position, of course, doesn’t mean Ellis will play for the Mavericks during the 2016-17 season. It’s more like an internship. It’s simply a step in the right direction as the 22-year-old, who averaged 17.0 points and 5.8 rebounds in his final season with KU, chases after his professional dream.

Ellis’ next few weeks playing for Dallas will determine what comes next, whether that turns out to be an invite to training camp, a guaranteed contract or playing professional basketball outside of the NBA.

So as we try and figure out, before the summer league even begins, just how likely Ellis is to stay with the Mavs and help out owner Mark Cuban and legendary forward Dirk Nowitzki, let us check out previous Dallas summer rosters to try and get a feel for how the organization utilizes those players following their July auditions.

Upon scouring the Mavericks’ teams from the previous five summer leagues, players in Ellis’ situation haven’t stuck around. The Dallas players who have turned offseason playing time in Las Vegas into actual regular-season minutes the following season have been draft picks or young guys in the earliest stages of their career who already had played for the Mavs.

Plus, the undrafted rookie free agents Dallas brought in between 2010 and 2015 (summer league was canceled in 2011 due to an anticipated lockout) never played a single minute for the organization during the ensuing season.

Using recent history as an indicator, it doesn’t appear Ellis has much of a shot at becoming a full fledged member of the Mavericks. However, each player’s situation is unique and Ellis has some factors working in his favor.

For one thing, Ellis is a consensus All-American. That doesn’t mean an NBA team will just hand him a contract. But, given his pedigree and talent, he should enter this trial with confidence. Ellis is more than capable of producing in summer league games and reminding Dallas that he is a different player than most undrafted free agents the team has tried out in the past.

Also, this year the Mavericks only made one draft pick, taking Purdue center A.J. Hammons 46th overall, in the second round. The organization could take a different approach to rookie summer players now, because it wasn’t able to utilize the draft as well this time around. If the Mavs were bringing in two or three draft picks, it would be inherently more difficult to be swayed by a young free agent. But with fewer roster spots slotted to go to draftees, you could see Dallas taking a longer look at Ellis and Florida’s Dorian Finney-Smith, who is in the same boat. 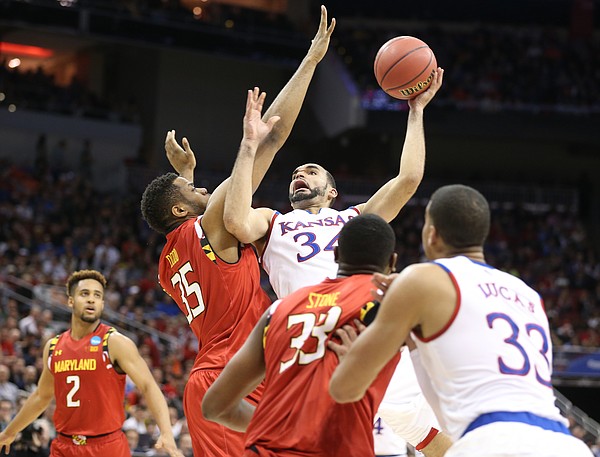 Kansas Jayhawks forward Perry Ellis (34) gets to the bucket against Maryland forward Damonte Dodd (35) during the first half, Thursday, March 24, 2016 at KFC Yum! Center in Louisville, Kentucky. by Nick Krug

While Ellis spends the next several weeks putting in the work required to make an NBA roster, the Mavericks’ success in free agency could determine how likely they are to sign a rookie to an inexpensive deal. At this point, the only core players Dallas has under contract are Wesley Matthews, J.J. Barea, Devin Harris and Justin Anderson. That means Cuban has loads of room to spend, spend and spend some more in free agency. Every summer Dallas goes after the biggest names available, and if Cuban can land Hassan Whiteside and/or Mike Conley and he wants to bring back Dallas free agents Nowitzki (obviously) and Chandler Parsons, while also adding a few less expensive NBA veterans, there will only be so much money left under the cap to fill out the roster. The more the Mavs spend, the more attractive it becomes to sign a young bench player on a cheap contract.

On top of all that, Dallas isn’t the only NBA team that will be watching Ellis. Scouts, coaches and general managers from all 30 teams attend summer league games. If Ellis plays well and the Mavericks still don’t want to keep him around, another franchise can swoop in and sign him instead.

Case in point: the Mavericks summer squad in 2010 featured a little known guard out of Harvard named Jeremy Lin. Lin never played for Dallas. In fact, he only played 29 games for Golden State the following season. But the next year, Lin became a sensation in New York and has had no trouble finding work in the NBA since.

Ellis’ journey may begin with the Mavericks, but there’s no telling where it will go from here.