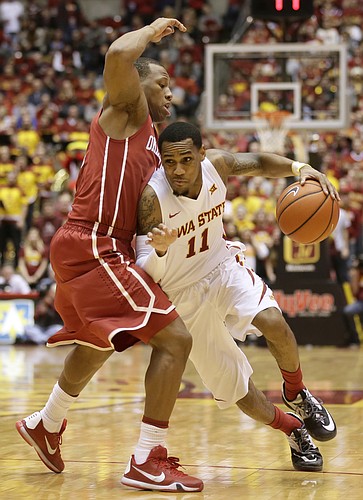 When first-year Iowa State coach Steve Prohm took over this past offseason, he inherited one of the most talented offensive cores in all of college basketball.

But for the all-around play-making of Georges Niang, the ferocious dunks of Jameel McKay and the three-point shooting of Matt Thomas, none of it would look so good without the orchestration of junior point guard Monté Morris. He’s the man that makes those 81.4 points per game and 49.1% shooting in Big 12 play possible for the Cyclones (15-4 overall, 4-3 Big 12) headed into a Big Monday showdown with Kansas at Hilton Coliseum (8 p.m. tip-off, ESPN).

So while we usually get to know all of the key rotation players in these KU opponent entries, this time we’ll focus on the talented Mr. Morris. With his speed off the dribble and court vision — not to mention his scoring ability — Morris’ play on offense likely will dictate the outcome of this contest for the Jayhawks (16-3, 5-2), who have lost back-to-back road games.

If Morris does as he pleases, it could be a long night for Kansas, which begins the week tied for first place in the Big 12 standings with Oklahoma, West Virginia and Baylor.

Morris is averaging 19.4 points in his last 5 games, knocking down 62.7% of his shots in that stretch (including an 8-for-14 run on 3-pointers), but he really isn’t the kind of player to rely on himself more than his teammates.

The way 6-foot-3 junior point guard described it at Big 12 Media Day, before the season began, there are too many weapons around him in ISU’s offense for him to play a me-first brand of basketball.

“It’s great. I know if I throw it back, Georges is gonna knock the three down,” Morris said. “You got Jameel … that’s an extra addition to our offense. That’s two or three more assists on me. That’s not even talking about the lobs me and him are gonna connect for this year. So, yeah, it’s gonna be a scary sight for other teams, but a fun sight if you’re a Cyclone fan.”

Morris, who averaged 11.9 points and 5.2 assists last season, said his decision-making has improved and a big part of that comes with the trust he has in the scorers around him who make his job “that much easier.” One of the point guard’s individual goals entering this season was to maintain an assertive offensive approach every minute he is on the floor — “Whether that’s creating shots for myself or others.”

None by Ames Tribune Sports

“Those guys, they’re marquee names for their programs,” Iowa State’s floor general added, “and when we play each other, it’s magnified as a big-time matchup.”

Regardless of his personal assignment from game to game, every time he laces up his Nikes, Morris enjoys the stage and competition of the Big 12.

“It ain’t about me and that guy that night. It’s about Iowa State and Kansas, Iowa State-Texas, Iowa State-Oklahoma,” Morris said. “I can’t beat Oklahoma by myself. I’ve got four guys that’s on the floor with me. Whatever I do individually, it’s an addition.”

As deferring and humble as Morris is in conversation, hist teammate Niang, ISU’s leading scorer, knew the point guard would put up more points this season. And Niang knew that development would make the Cyclones all the more dangerous.

“I can score on you or I can go pass it to my teammate, who can also score on you,” Niang said of Morris’ new approach. “So I think the thing with him is he’s gonna be more in control and really be able to take over games, which I’m excited to see, because he’s been doing that for two years at practice now.”

I hope we don't get down by double digits. Niang and Thomas can bury you if you get into a three fest and strength vs weakness favor the Cyclones with Niang/Ellis cancelling each other out. We will be undersized in our short rotation again. Need to hit shots like second half vs Texas.

This would be a huge win in so many ways. Are we up to it? The jury deliberates.

Yes. And chase them off of the 3 point line tonight. I want to see ultra aggressive defense especially on the perimeter. We cannot allow Niang to go off on us from 3 and expect to win. We certainly don't want to turn a 25% shooter into 50% either which has been a trend this year. Chase them off the line! This team will win tough road games if they can crank it up on the defensive end and start shutting teams down. Not by trading buckets.

I just don't think Mason will handle Morris at all. Mason is too small and it will be a nightmare match-up. Graham needs to match-up with Morris.

I love Mickelson, but I don't want to see him or Lucas for hardly any of this game. Withey was a great player, but his slow speed made him nearly useless against ISU when he was here and I fear that those two would not have the speed to keep up and close out. I would like to see the experience of Traylor starting and be backed up by both Bragg and Diallo. They have the athleticism and closing speed to keep up with the ISU bigs on defense and spread them out and give us a better shot on offense. ISU is about as shallow a team as we will face so if we can be aggressive and drive the basket and get Niang and or McCay in foul trouble we can run away with it, but if we get into a shooting match we could be in for a very long night.

Lots of quirky matchups. The recipe for a great game and coaching strategy galore.

ISU has at most 6 players ready for a game like this. Kansas has at least 10. Big difference.