Bill Self told KU football players they can build something special 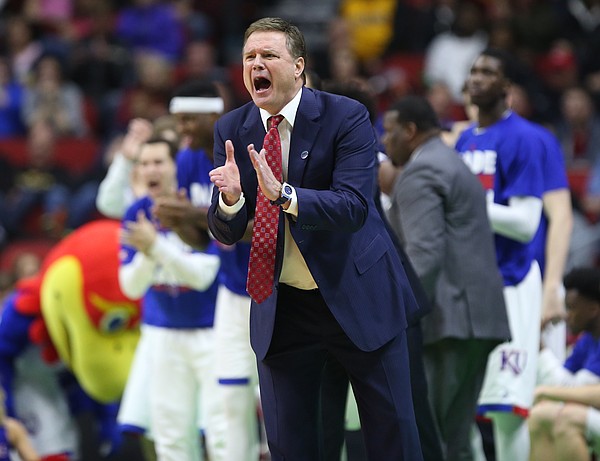 Kansas head coach Bill Self applauds the Jayhawks as they widen their lead during the second half on Saturday, March 19, 2016 at Wells Fargo Arena in Des Moines. by Nick Krug

At the beginning of the month, when the Kansas football team reported to Lawrence for preseason camp, David Beaty invited another head coach on campus to give the Jayhawks a pep talk.

Behind closed doors, KU basketball coach Bill Self didn’t gloss over the football program’s struggles. He instead referenced the present as a place to start assembling a product that will make Kansas fans proud.

We know this now thanks to Time Warner Cable Sports Channel - Kansas City, which tweeted out a video of Self’s speech Thursday morning.

While Self hailed the importance of the football players being a part of the “Jayhawk family” he also informed them that he and the rest of the basketball program want to see them succeed.

“Get this in your head: We want you to win and win big,” Self said.

The way the 14th-year KU hoops coach explained it, the university’s storied basketball program has reached a place where their jobs as players and coaches are pretty obvious, and they’re constantly trying to match their historical predecessors.

“Our job is to maintain,” he continued. “You know what your job is? To build.”

While the first season under Beaty didn’t produce a victory, Self asked the players whether that difficult fall also served as the starting line for establishing a new culture.

“Now, deep in your core, if you’re worth your salt at all, would it mean more to you to be a builder or a maintainer? Think about it,” Self said. “Being a builder means maybe going 0-12 your first year, ’cause you don’t have as many bullets, all right? But being a builder is developing a culture. How are you gonna work? How responsible are you gonna be? How hard are you gonna study film? How good of leadership you’re gonna have. Are we gonna pick each other up? How good a teammate you’re gonna be. That’s the culture. That’s how you have a program.”

Before wishing the Jayhawks luck in the coming months, Self rattled off some of the universities where basketball and football have had great success, referencing Ohio State, Oklahoma, Florida and Michigan State. Then the basketball coach reminded the players it wasn’t that long ago that KU football was great, too.

“That means it can be done again. You guys agree?” Self asked. “There’s been some brothers pave the way before, OK. Now you’ll get to pave the way for future teams coming.”

If the players in the football program now can lay the groundwork for another successful run like Kansas experienced with Todd Reesing, Aqib Talib, Mark Mangino and company, Self said they too will be “remembered forever” and understand what it’s like to be a part of the “Jayhawk family.”

Before @KU_Football's season begins, they got a pep talk from a familiar #kubball face - https://t.co/9CDYV7yoXphttps://t.co/2k7jFM0eQv

None by TWC SportsChannel KC

Beatty should email this to a couple of North Shore players that were once Armstrong and Long’s teamates. North Shore’s K'Lavon Chaisson, DE, and Bryant Badie, QB/Athlete are both uncommitted and would be great KU pickups.

While Beatty is at it, he could send it out to several other top Houston area uncommitted quality OL guys like Walker Little, Episcopal;, Katy; Kenneth Pleasant (76), OL Seven Lakes; Eleasah Anderson (75), OL, Alief Taylor. Also some top uncommitted defensive players like Corey Bethley, DT and Michael Purcell, DE, The Woodlands….plus about 30 other uncommitted in the Houston area top 100.

Couldn't agree more Jeremy. His distinction between maintaining a program [basketball] and building a program [football] is right on point.Coach, recruit, public relations etc. he is the best.

I bet it just grinds OSU people, especially Garth Brooks and others, to hear Self talk about KU like this.

Hey it can be done! One can walk and chew gum at the same time I.E. have a good football and Basketball team!

Another school Coach Self could have mentioned that has done well in both football and basketball was Oregon!