The argument usually goes something like: Bill Self can’t win with these one-and-done college basketball players, so KU should stop pursuing recruits the coaches know will only play one season in Lawrence before moving on to the NBA.

While that’s an interesting hypothesis, capable of prompting entertaining debates, it’s not a concept Self would ever consider. Nor should he.

A coach running one of the nation’s elite basketball programs doesn’t just let some other school — one that he very well might run into during the Madness of March nonetheless — nab a player such as Josh Jackson, already projected as a top pick in the 2017 draft. 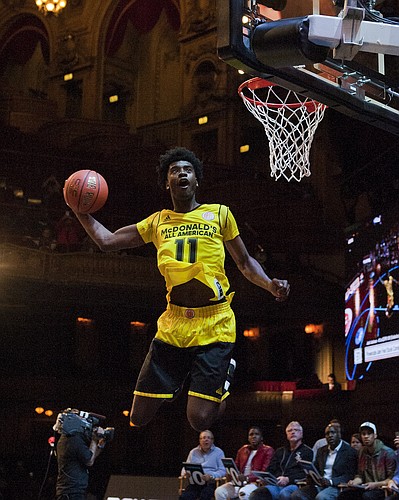 Self’s job each season entails putting together a roster capable of competing for a national championship. If he and his assistants think a lottery pick in waiting like Jackson — a 6-foot-7 shooting guard ranked as the nation’s top recruit by Rivals.com — will increase KU’s chances of cutting down as many nets as possible the following season, you better believe they’re going to do all they can to get that young star in a Kansas uniform.

Jackson, who committed to KU Monday night, didn’t just do so to showcase his talent for NBA scouts and general managers. Jackson is coming to Kansas because Self thinks the Jayhawks will be better with him on the floor.

Getting back to the crux of the argument, it is true Self hasn’t yet experienced significant NCAA Tournament success with one-year stars (or projected stars).

The biggest name to pick Kansas in quite some time before Jackson followed suit three years later, Andrew Wiggins couldn’t get the Jayhawks past the Round of 32 in 2014. Even though Wiggins went on to become the No. 1 pick in the NBA Draft a few months later, and took home Rookie of the Year honors, he only scored 4 points against Stanford in a season-ending loss. 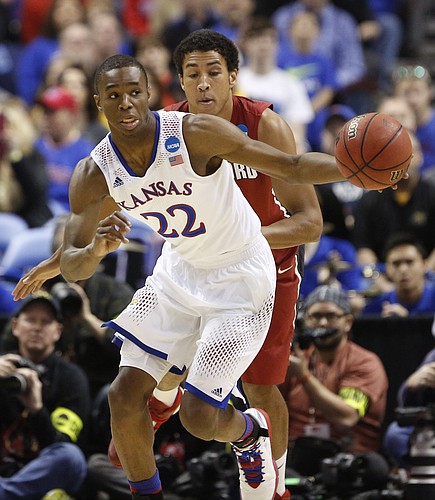 Kansas guard Andrew Wiggins heads up the court past Stanford forward Josh Huestis during the first half on Sunday, March 23, 2014 at Scottrade Center in St. Louis. by Nick Krug

A year later, Kelly Oubre Jr. didn’t produce enough to get KU to the Sweet 16, either, putting up 9 points in a loss to Wichita State.

The presence of one-and-done Jayhawks didn’t lead to those defeats, though. As Self has gladly addressed publicly, both of those KU teams faced significant determents in the forms of injuries. Joel Embiid, drafted third overall three months later, couldn’t play even a minute for Kansas in the 2014 Big Dance. The following March, a nagging injury slowed down Perry Ellis, robbing him of his typical quickness and explosiveness.

If KU had Wiggins and Embiid playing in the NCAAs two seasons ago, this idea that Kansas can’t survive and advance with such talents almost certainly wouldn’t exist. It’s hard to envision Kansas losing to an underwhelming Stanford team with two of the top three picks in the draft on the floor. From there, could the Wiggins/Embiid-led Jayhawks have handled Dayton in the Sweet 16? Seems pretty likely. And how would that young Kansas team have done in an Elite Eight matchup with Florida? We’ll never know for sure, but simply reaching that regional final would have drastically changed the narrative surrounding Self and his postseason success with one-year wonders. 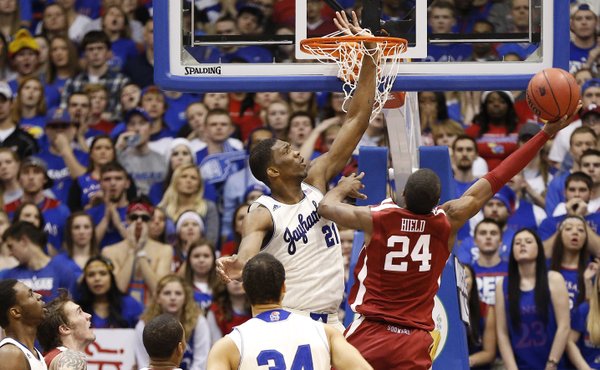 While it is also true that Self’s best marches through the NCAA Tournament have come with veteran teams (see: 2008 national championship, 2012 national runner-up, 2016 Elite Eight), we shouldn’t just assume he is incapable of reaching college basketball’s promised land with a freshman phenom or two on board.

It takes the right player and the right set of circumstances, but one-and-done freshman have taken on starring roles for Final Four teams for years now.

Obviously, one could also put together a list of veteran college players who led their teams to Final Four berths. The point is there is more than one avenue to NCAA Tournament success, and having a young star in the mix doesn’t automatically disqualify a team — or coach — from doing something special in the postseason.

Perhaps the fear among Kansas fans is that Self would begin to mimic Kentucky’s John Calipari, cycling through year after year of one-and-done lineups. Self isn’t interested in that approach. He likes having veterans who can help the youngsters along. Self would never want to start five freshmen — it would likely drive him bonkers. But mix a stud freshman or two with some experienced Jayhawks? Now that makes a lot more sense.

None by Nike Hoop Summit

If Self and Jackson have their way, KU will add to its rich tradition in 2017, with a freshman lottery-pick-to-be making crucial winning plays in March, alongside some Jayhawks with postseason experience.

(Still wish it were TAD, but no single vision between Silver and the NCAA yet)

My argument has never really been whether we could win with them, though you provide a long list of excuses as to why we never have. My argument is that this is a University and it should act like one.

What does that mean? Are kids in other endeavors not allowed to leave either? Gates and Allen dropped out to start a business. Should their schools be punished? Ellison dropped out. His school too?

What does KU do that isn't like every other school in America?

You're just bitter because Self only has one national championship.... Spit it out.

So what's the role of a university then? Is it not to help prepare students for life after college and to provide them a base set of skills for tge professional environment?

Do you think Bill Gates should have stayed in school instead of quitting school to focus on Microsoft?

IMO - The advancement to the FF is more about a lead guard. Obviously, you need quality support as well, but it starts at the point. It's (part of) the reason UK flamed so badly in 2013, and a big chunk of why we were there in 2008 as well as 2012. It was a bit of a weak link 2 years ago yes?

It's the reason I'm excited about the possibilities for this next team. We have ball handlers that can also hit the outside shot. While our frontline might not be quite as strong (relatively) as our backcourt, it is a pretty girth bunch that should be able to set some nice screens, and hopefully clean up in the paint.

Personally I'd prefer 4 year players to one and dones--I think KU's record in March tends to be better when you have experience than when you don't. If you're going to recruit a one and done, ok, then I'd take the player with the most mature body--Wiggins for example looked a bit thin when compared to say Rico Gathers, and that fact unfortunately tends to make a slasher into more of a jump shooter.

All that said, you can bet I was very pleased to see this young man commit to KU. Good luck and best wishes to him and to his family.

From some of the videos I've been watching it seems like Jackson has much better handles than Wiggins, which is why I believe Wiggins decided not to slash as much against a lengthier, bigger defender. Wiggins tended to dribble with a flat hand and needed a little more space between him and the defender to slash. Hopefully Jackson's handles will allow him to slash against players bigger than him. I don't think it has as much to do with body maturity as it does handling ability. His jump shot also looks a little better than Wiggins coming out of high school, so maybe him deciding to pull back jumper won't be much of a liability but more of a weapon.

Seriously. Self has little choice in the matter. If he chose NOT to pursue this kind of talent, the hell-storm of criticism from the KU "faithful" would be unrelenting. We can deplore the state of amateur basketball in the USA but if will take us decades to change it. Basketball, like all sports in the modern era, is an industry. And like all industries it develops its own "best practices". It has evolved because of the collegiate game's lack of opportunity for the physically gifted but educationally challenged youth. All of that being said, Self has done a "great" job of staying true to the "student/athlete" and the KU program and its legacy. One has to look back no further than the immediate past season and Cheick Diallo (sp?). The NCAA screwed the kid from the get-go and self and KU walked the fence top as well as could be expected. But in the long run self did what was best for his team and, most probably, Diallo, by limiting his exposure. IMHO Diallo has made a mistake (?) by declaring for the draft, as he is obviously not ready to compete in the NBA. But I don't walk in his shoes, nor do I know the particulars,m of his family's situation financially. But for Self and KU, Self did what he must do. He took care of all three identities he is entrusted to guide and nurture; the student, the team, and the institution. Self is very fortunate to be in the situation he is in at KU. But KU is, maybe, even more fortunate to have Bill Self. IMHO, by the time he is finished at KU, he will be "THE KU Coach" and be the standard that all future coaches at KU will be measured. He will stand in the midst of the great NCAA BB Coaches; Wooden, Coach K, Knight, Rupp, Iba, all of the greats.

The Chicken Littles will go bananas either way.

It's simple, either you go after the best talent or your competition does. Either you get the best talent or your competition does. Any fan base should be happy as a pig in mud that they land some of the most talented players. How long they stay is totally out of the control of the coaches. In today's environment it's a very fine line between the Perry Ellis's and the Josh Selby's. As I recall Brandon Rush looked at his NBA status every year and the way the rules were he finally had to just commit to the NBA after his junior year. Unfortunately, a team full of "4 year could make a living playing in Europe", players will not get you very far in the tournament. The same can be said of a team of 5 freshman OADs.

I agree. Coach has done a good job with a delicate balance of big-name newbies and solid multi-year players. Injuries before the tournament the last 2 years and parental faux pas aren't things he could control/predict. Under the harshest spotlight, elite teams' coaches have to pursue at least some of the 'elite' players, even though high school 'elite' doesn't always translate to collegiate 'elite', much less pro status.