Getting to know upset-minded NMSU 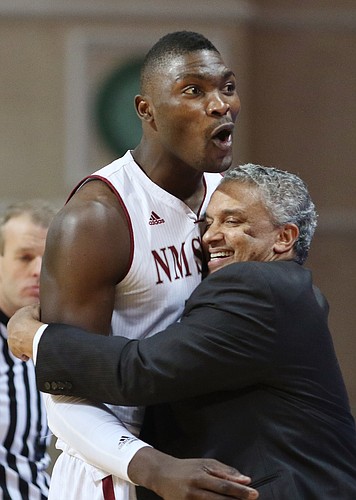 New Mexico State coach Marvin Menzies, right, hugs center Tshilidzi Nephawe toward the end of the second half of the Aggies’ victory over Cal State-Bakersfield in the semifinals of the Western Athletic Conference tournament on Friday in Las Vegas. Nephawe is one of four seniors Menzies will count on when the Aggies open the NCAA Tournament against Kansas on Friday in Omaha, Nebraska.

The WAC regular-season and tournament champion Aggies lost at Baylor, 66-55, back on Dec. 17. But this is March. And upsets rule supreme.

If New Mexico State wants to test — or upset — Kansas, it will have to do so with its defense. The Aggies are:

The Aggies do all of that while playing pressure defense, and an adapting half-court zone that actually specializes in taking away open 3-point looks.

“We try to make it impossible to bring the ball across half court,” Eldridge said. “It mostly comes from all our deflections. We keep count of that. Daniel (Mullings) leading in deflections right now. Myself, Ian (Baker) can do it. And our back wall guys, they very athletic and make plays, as well.”

In summation: It’s the kind of approach that opponents hate.

In order to get to know the Aggies better, I asked senior guard Eldridge to provide his take on each of NMSU’s top six players. 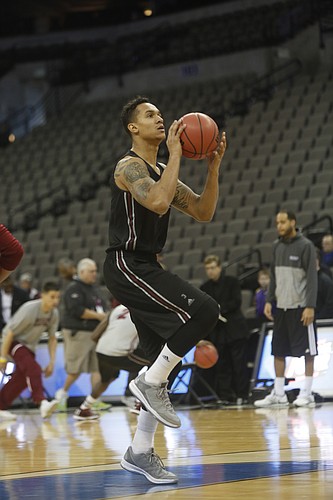 “Coming off an injury from last year, he’s had a very successful year. He brings scoring to the table and he’s a part of our defense with his length.”

“He knows his role. He don’t get outside his box too much.” 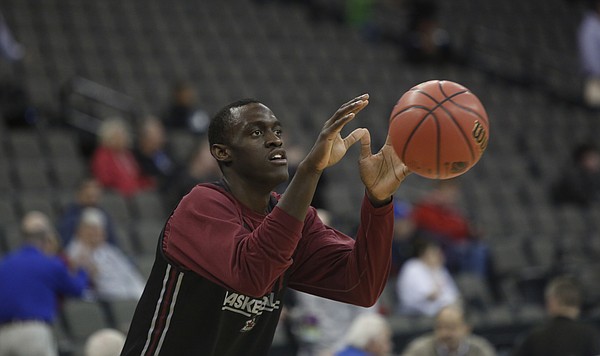 “Oh, man. He an animal down low. Only a freshman, though. That’s what’s crazy about it. He’s got a lot left. Hopefully this’ll give him experience to have confidence for the future.” 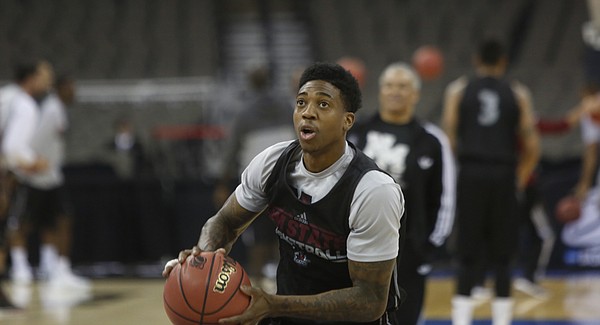 New Mexico State senior guard Daniel Mullings warms up with his team during a practice session at the CenturyLink Center in Omaha, NE., Thursday, March 19, 2015. by Richard Gwin

“Similar to myself, we just go out there and do what we do best: play hard every possession, give it our all for 40 minutes.”

“He’s a very strong driver, capable shooter, very good defense on the ball and off the ball.”

“Just call him ‘Chili.’ He gets mad if you don’t say his nickname.”

“Just a big presence down low. Offense, it’s hard to stop him. Big, strong kid. A guy you want to get the ball to every time. You know you’re gonna get a bucket out of him.”

“On the defensive end, he just change shots, rebound, guard. He can get down and guard guards if he want to.”

“His conditioning got better. He came off an injury not too long ago (missed 12 games before returning in mid-January).”

“He’s a senior, does the right things. Not too many mistakes — on and off the court. He’s a guy that you want, and we want. We’re lucky to have him on our team.”

“He brings a lot. For being a young player, he’s a very experienced guy. He’s very mature at his position.”

“He can shoot the ball very well. He can lead the team on offense, and when he wants to he can play very good ‘D.’”

“He comes from a family with a lot of older brothers, so I think that’s why his maturity is so strong. … He’s a very good leader. We listen to him. He puts us in the right position to win games, hits a lot of big shots for us… When we’re in a deep situation, he’ll get us out of it.”

Eldridge considers himself a defensive-minded guy.

“That’s where my offense comes from most of the time — playing good ‘D.’ I know this team needs me in that category, so I just try my best to come off the bench and bring energy, especially when the starting five’s not feeling too energetic.”

I'm scared, very scared. This team plays right into KU's weaknesses -- a terrible slump from three-point range, all kinds of turnovers, and giving up too many offensive rebounds. And today's Big XII losses don't help.

Someone please talk me off the ledge.

Well for starters look at the conference that they play in. The WAC ranks 31st out of 33 conferences as far as strength of schedule. Also, this team doesn't shoot a ton of 3s like teams such as UNI or VCU did to beat us. And last, they talk about their size as if KU were the same size the teams that they've been playing for the last two months or so. Which isn't the case. This team is like a poor man's Texas on offense and rebounding. and a slightly poor man's Baylor when it comes to zone and such.

Yup! It looks like the Big 12's HIgh RPI is not worth beans.