Getting to know No. 21-ranked Baylor 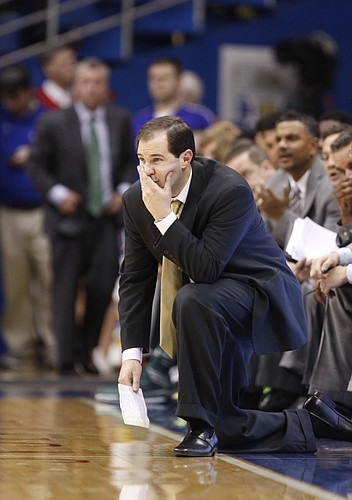 Baylor head coach Scott Drew watches from the sideline during a Jayhawk run in the second half on Monday, Jan. 20, 2014 at Allen Fieldhouse. by Nick Krug

Given the depth and quality of the Big 12 this season, it somehow seems appropriate Kansas will begin its conference title defense on the road against a top-25 team.

These are the exact types of games the Jayhawks will have to win in order to extend their regular-season championship run to 11 years in a row.

For No. 12 KU, the journey begins Wednesday night at No. 21 Baylor.

Scott Drew, who is 3-13 against Bill Self’s Jayhawks since taking over in Waco, Texas, has coached BU to 12 straight victories at the Ferrell Center. Wouldn’t you know it, the Bears’ last home loss came to Kansas on Feb. 4, 2014.

Baylor has only surrendered 56.1 points a game this season (13th in the nation) and has a field-goal percentage defense of 37.7% (28th nationally). What’s more, the Bears have held their opponents to an average of 13.0 points below their season scoring averages.

It’s time to meet the Baylor players Kansas will have to hold back.

The 230-pound redshirt freshman is a load inside and capable of doing serious damage on the offensive glass (see: 8 offensive boards vs. Texas A&M on Dec. 9).

Motley is said to have added 20 pounds of muscle while sitting out the 2013-14 season — a year he spent battling Isaiah Austin, Cory Jefferson and Rico Gathers at Baylor practices.

The strategy (one rarely seen in major Division I college basketball) seems to have paid off. The first-year forward averages 10.8 points, 4.8 rebounds and 1.6 blocks on the season. But he has come on much stronger of late, leading Baylor in scoring in four of the last five games. In that five-game stretch, Motley is averaging 17.6 points, 6.4 rebounds and 3.2 blocks.

This followed back-to-back games in early December when he fouled out and went scoreless.

In his Big 12 debut this past weekend, Motley scored 24 points and hit 9 of 12 field goals in a loss at Oklahoma.

— hoop-math.com nugget: Motley loves finishing inside, where he has 37 field goals at the rim. Keep him away from point-blank range and he makes just 24.4% of his 2-point jumpers and 25% of his 3-pointers.

None by NCAA Tourney

Both Baylor and O’Neale benefited when the forward decided to transfer and become a Bear after playing two seasons at Denver.

As a junior, O’Neale became the first player in Baylor history to produce 200-plus rebounds and 100-plus assists in the same season, and though he doesn’t play in the backcourt he ranked second on the team with 2.9 assists.

Speaking of guard skills, he has made four or more 3-pointers in three games this season. 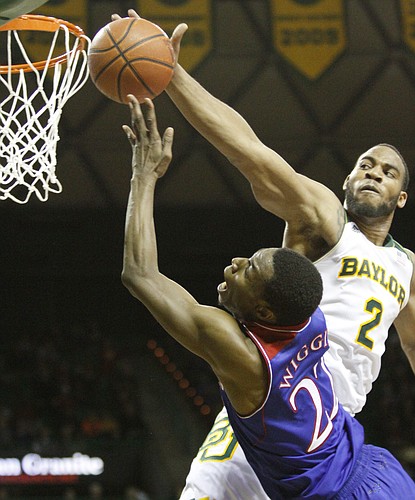 Baylor forward Rico Gathers blocks a shot from Andrew Wiggins, but got called for a foul during the second half of the Jayhawks' win over the Baylor Bears Tuesday, Feb. 4, 2014 at Ferrell Center in Waco, Texas. by Mike Yoder

Gathers nearly averages a double-double — 9.6 points, 10.6 rebounds — now that he’s a Baylor starter, as a junior. A monster in the paint, and at times impossible to block out, he’s averaging 4.9 offensive rebounds a game — second to Stony Brook’s Jameel Warney in that category.

According to sports-reference.com, the beastly forward controls 20.3% of available offensive rebounds. That’s second in the nation, to Nevada’s AJ West (22.2%).

Gathers’ six double-doubles this season lead the Big 12 and he averages one rebound every 2.8 minutes in his career.

— hoop-math.com nugget: Little surprise here, but Gathers leads Baylor in put-backs. He has scored 27 times on the offensive glass this season (Motley has 15 put-backs) and makes 50% of his put-back tries at the rim.

Lester Medford introduces himself to Baylor fans with 11 points, 4 assists in 1st half. #SicEm pic.twitter.com/5YpccfvMtW

A junior-college transfer, Medford is similar in size and ability to fellow backcourt mate Kenny Chery. He started five games for Chery when the incumbent guard hurt his foot and dished 30 assists, against seven turnovers.

A double-digit scorer in six games this season, Medford also mixes it up defensively, with 1.7 steals (tied for fifth in the Big 12 with Frank Mason III).

— hoop-math.com nugget: Of Baylor’s rotation players, Medford spends the least time taking shots in between the rim and the 3-point arc. Just 14.8% of his shots have been 2-point jumpers, while 35.2% have come at the rim and a whopping 50% have come from long distance. 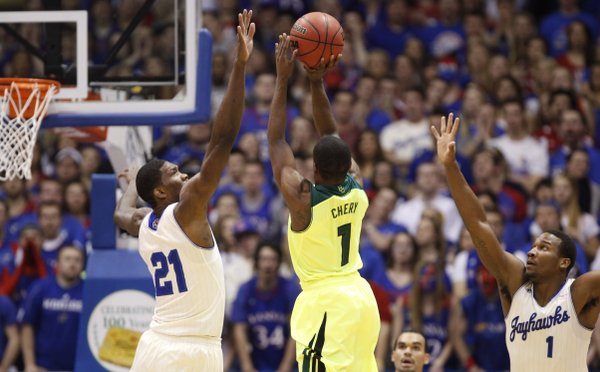 Kansas players Joel Embiid (21) and Wayne Selden defend against a three from Baylor guard Kenny Chery during the first half on Monday, Jan. 20, 2014 at Allen Fieldhouse. by Nick Krug

Since missing five consecutive starts (coming off the bench in one) with planter fasciitis, the senior from Montreal has set up his fellow Bears to the tune of 6.8 assists a game in his last four starts, compared to 2.0 turnovers a game.

The point guard channeled his inner scorer at South Carolina, where he poured in 18 of his 20 in the second half to help Baylor win on the road.

A starter for five games this season while Chery recovered, he has easily transitioned into a stellar sixth man. Prince’s 12.0 points per game and 21 3-pointers lead the Bears. He has made that many bombs on just 39 attempts — giving him the Big 12’s top percentage of 53.8%.

With nine double-digit scoring games, he leads Baylor (Gathers, Medford and Motley all have six such performances).

Prince played 30 minutes at Oklahoma, and shot the ball well — 6-for-12 from the floor, including 4-for-8 from 3-point range.

— hoop-math.com nugget: He can create his own easy points. Only 50% of Prince’s shots at the rim come off assists. His method? Crashing the offensive glass. He has 11 put-backs.

Another redshirt freshman (he missed eight weeks with a broken wrist last year), Freeman has scored double-digits off the bench in three of BU’s past five games.

But at Oklahoma, Drew only played Freeman 16 minutes and he went 0-for-3 with one point.

He has yet to start, but averages 6.5 points in 19.3 minutes and has reached the foul line (20-for-29) more often than starting guards Medford and Chery.

— hoop-math.com nugget: Most of his shot attempts, 55.2% actually, come from long range. However, Freeman has connected on just 29.7% of his 3-pointers.

Newell has us losing by 4, the line is Baylor getting 2 unless it just changed. Looks it will come down to how much energy we bring from the tip off.

I predict KU by 1 after being down at half time.

My heart tells me we'll win, but my gut says we'll lose. I think you have it right. Its going to come down to the energy we bring (what others call "energy" I consider playing competitively without disappearing). This game is both winnable and loseable. If we win tonight it will be on the backs of our post players, inasmuch as Brady Heslip graduated last year (which, if he were here would have placed the onus on our perimeter play). Leastwise I expect a dogfight much like the first half of Kansas/UNLV.

This is gonna be a tough one...

If you need a pick me up after the game tonight or just for a chuckle, check out Fred Hoiberg's Infinity Coaches Challenge ad on YouTube. Man's a dancing fool.