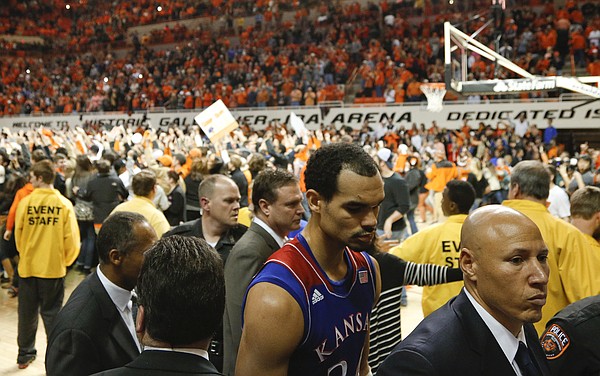 Stillwater, Oklahoma is not always a pleasant place for the Kansas basketball team to visit.

The Jayhawks have lost three of their last five trips to Oklahoma State’s Gallagher-Iba Arena, dating back 2008, when the eventual national champs lost 61-60 at OSU.

The Cowboys are 15-7 overall this season and 5-5 in the Big 12. What have they done well in order to remain competitive in the league? For starters, they play defense and limit opponents’ scoring. Looking at conference games only, OSU enters the weekend:

Oklahoma State is coming off one of its most impressive victories of the season, too — a 65-63 overtime win at No. 25 Texas. On the road, the Cowboys got UT to turn the ball over 18 times.

To refresh everyone’s memories: Here are the Cowboys Kansas will have to worry about down in Stillwater. 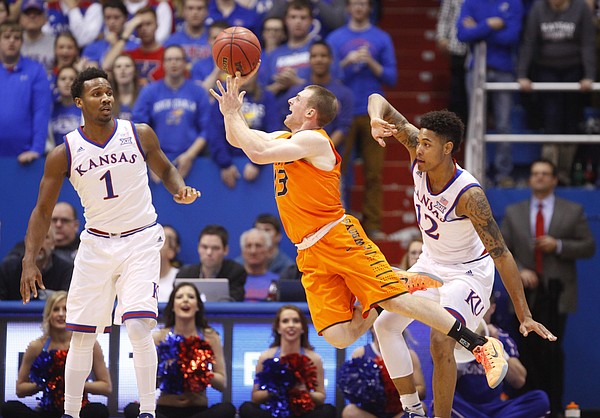 Wednesday night, Texas gave the small guard trouble, holding him to 3-for-13 shooting and keeping him from even getting off many 3-pointers — 1-for-3. But Forte had the last laugh in Austin, Texas.

After missing a free throw late in the second half, Forte had the ball in his hands in the final seconds of overtime. He drove to the paint and drew a foul on Cam Ridley. The junior hit both of his free throws — 7-for-8 in the game — to send OSU home with a win.

Not too surprising, considering the guy has taken 119 free throw attempts this season and has hit 85% of them.

Earlier this week, Self called Forte “tough as nails.”

Forte has scored in double figures in 21 of his las 22 games, and in all five of his career meetings with KU.

He has shot 50 percent or better from the field in four of his last five games.

— hoop-math.com update: Sure, Forte can drill the long ball. But he also drains jumpers inside the arc. He shoots 47.5% on 2-point shots away from the rim, making 28 of 59.

Not once this season has the senior failed to reach double digits in scoring.

Nash is not a good 3-point shooter. Wisely, he has only taken 7 from behind the arc in conference play. He hit one of them, giving him a success rate of 14.3%.

No, he didn’t play great at Allen Fieldhouse, but few do in their first trip to the venue.

It’s easy to see Hickey playing a much more prominent role at Gallagher-Iba.

At Texas, Hickey went for 15 points and made all three of his 3-pointers, while failing to pass out an assist for the first time this season. But he wreaked havoc on defense, with 4 steals in the crucial win.

— hoop-math.com update: Almost half (49.7%) of Hickey’s shots have come from 3-point range (32-for-93). But he’s not just a catch-and-shoot guy. Thirteen of his three-pointers have come without an assist. 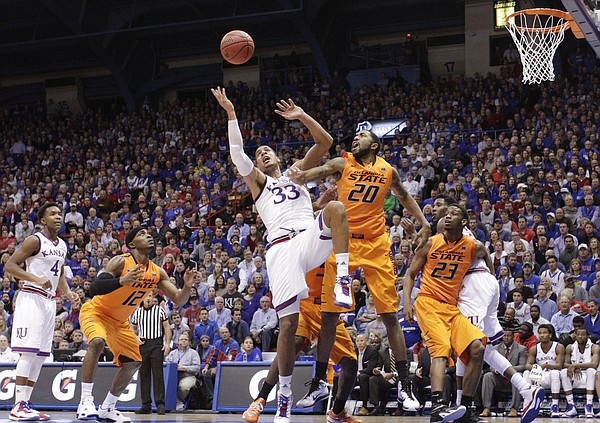 Kansas forward Landen Lucas (33) fights for a rebound with Oklahoma State forward Michael Cobbins (20) during the second half, Tuesday, Jan. 13, 2015 at Allen Fieldhouse. by Nick Krug

Not much of a scorer — his 7 points apiece vs. Texas Tech and at Kansas State are his most in Big 12 games — Cobbins makes his presence felt in the paint.

Since the start of conference play, he has blocked 4 or more shots on three occasions:

OSU won those two home games and only lost by two at ISU.

— hoop-math.com update: Cobbins has converted 39 of his 47 shots at the rim this season, but only 6 of those buckets have come on put-backs, via the offensive glass. 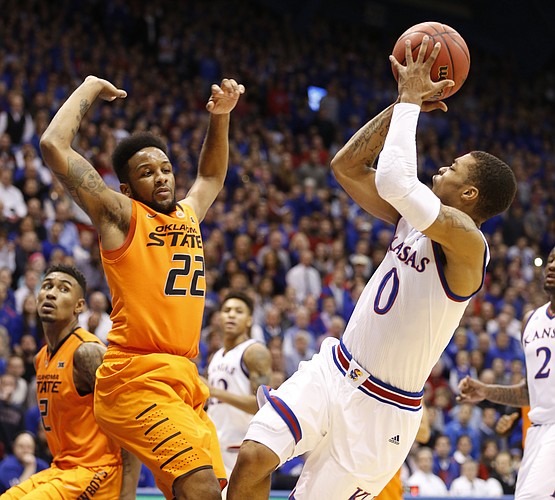 Kansas guard Frank Mason III (0) puts up a shot after being fouled by Oklahoma State guard Jeff Newberry (22) during the first half, Tuesday, Jan. 13, 2015 at Allen Fieldhouse. by Nick Krug

A backup earlier this season, he has started since the last week of December. He had 13 points and a career-high 6 rebounds in OSU’s home win over Texas Tech. Later, he went for 10 points and 4 boards in a home victory against Baylor.

A streaky shooter, Newberry failed to make a 3-pointer in six of his last seven games. 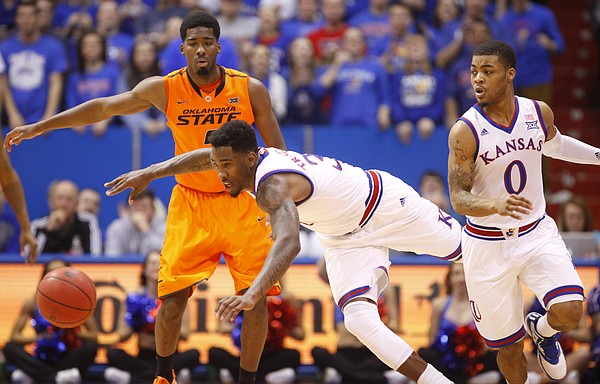 Just a freshman, he has become the most used backup on an OSU team that isn’t very deep.

He and Tyree Griffin played 9 minutes each at Texas to lead OSU in reserve minutes played.

In Big 12 games, Shine averages 4.8 points in 16.0 minutes. He scored a season-high 11 points and nailed all three of his 3-point tries in the Cowboys’ home win vs. Baylor.

In his last three games, Shine has made 5 of 7 3-pointers.

The caption under the top picture should say, "Kansas forward Perry Ellis makes his way to the locker room to pick up the Big XII trophy as Oklahoma State students storm the court following the Cowboys' 72-65 win on Saturday, March 1, 2014 at Gallagher-Iba Arena in Stillwater, Oklahoma." by Nick Krug

We had some people giving us a hard time after the game last year in Stillwater...our response was, "well, KU just won the league so that's ok."

I watched much of the OSU/Texas game. Texas was horrible from the start, and it wasn't really because of OSU's defensive pressure early. Bad passes by Texas and unforced Turnovers. Texas didn't even get a shot off until there were almost 4 minutes gone in the game. Texas is better than that folks.

With that said, this is a game that we better be ready for. Oklahoma State wants to beat us regardless of the win/loss records. They have the talent to play with us and even to beat us if we don't bring our A game. Forte is a guy that is fun to watch as long as it's not when we're playing against him. Gotta keep a blanket on that guy. Nash, he always get's up for us. Cobbins, he's under performing this year but he could break out any minute.

If we take care of the ball, get back on defense, and defend the entire half court against Forte, rebound, and execute in our half court sets, we'll win by double digits. But don't count on all those things being perfect.