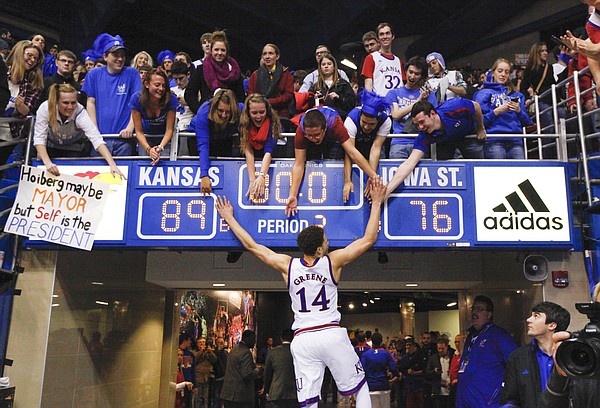 Kansas guard Brannen Greene slaps hands with the students seated above the scoreboard showing the Jayhawks' 89-76 victory over Iowa State on Monday, Feb. 2, 2015 at Allen Fieldhouse. by Nick Krug

Sitting alone at the top of the Big 12 standings, with a two-game lead in the loss column on both West Virginia and Iowa State, the No. 8-ranked Kansas basketball team travels to coach Bill Self’s old stomping grounds, Oklahoma State, this weekend.

But the cushion midway through the conference schedule doesn’t have the Jayhawks satisfied.

Before KU (19-3 overall, 8-1 Big 12) takes on the Cowboys (15-7, 5-5) on Saturday, Self had his weekly noon press conference with the media Thursday to talk about the league title race, where KU stands in terms of the big picture this season and a little bit about his basketball philosophies.

• Wayne Selden Jr.’s shooting (35.9 field goal percentage) hasn’t been impacted by his effort on the defensive end. His mom came to town, he got a new haircut, Self joked of Selden’s recent improvement. Hopefully Selden is on an uptick. When you’re worrying about the right things you shoot it better. He hadn’t shot it like he is capable of on the season. He hasn’t shot the ball as well inside the arc and needs to finish better when he goes to the hole.

• It’s easier to prepare for the next game when you’re in good spirits, so that should be good for KU going to Oklahoma State, a difficult environment. The two-day turnaround can be more difficult, too. OSU had a great win, beating Texas on the road in overtime, so they will been focused in for Saturday, too.

• KU has a good shooting team, there just hasn’t always been consistency. Brannen Greene can really shoot the ball. Brannen makes “real shots,” just jumps up and shoots with confidence. Game situations determine how many 3-pointers you shoot. Historically, around 30 percent of KU’s shots under Self have been 3-pointers, and they’re near that clip. (This year, 366 of KU’s 1246 attempts are 3’s — 29.4%.

• Cliff Alexander hasn’t hit a wall. He just hasn’t scored the ball as much lately. He doesn’t sore off post-ups and scoring over people, he scores off penetration and that sort of thing. Some of the guys in the eight-man rotation have minutes drop off because of foul trouble and other situations that come up within a game.

• Usually KU plays inside-out and that’s the way Self wants to play, even if KU isn’t scoring on the blocks like it has in other seasons.

• It’s a goal every year to win your conference. The Jayhawks don’t talk about it a ton. They huddle up at the end of practices and say “Big 12 champs.” Sometimes that’s the extent of it. It is important to the guys. There is some pride there with the streak. There just isn’t any extra emphasis on it.

• Certain times KU has looked good against pressure and other times it hasn’t. Sometimes KU looks “pitiful” when the opponent gets after them. Sometimes Frank Mason III has played so many minutes it’s hard for him to get open on his own late in the game. Sometimes you’re in a situation where if you handle the clock right, it is almost impossible for the opponent to come back. 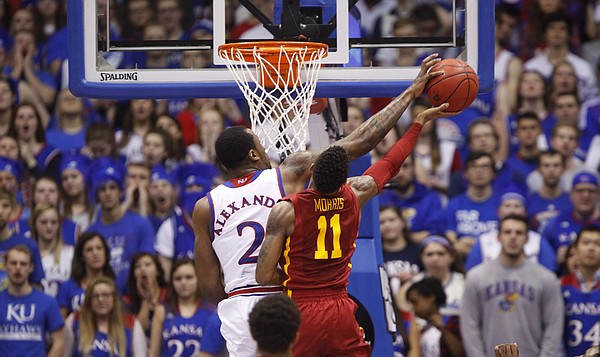 Kansas forward Cliff Alexander (2) blocks a shot by Iowa State guard Monte Morris (11) during the second half on Monday, Feb. 2, 2015 at Allen Fieldhouse. by Nick Krug

• Self thought all along KU could be a very good defensive team, and it seems like it is headed in that direction. Self always looks at Big 12 stats and not season stats. Those season stats “aren’t real” with the non-conference blowouts that get lumped in with those numbers.

KU hasn’t rebounded (+2.7 per game) or shot free throws (67.8%) as well in the Big 12. They aren’t as good as Self thought they would be at protecting the rim, either. That’s a big area they can improve in.

• Self couldn’t believe it’s been 30 years since he played at OSU. He loves Stillwater and his time at OSU. It was emotional for him going back there his first year at Kansas. It’s not anything different for him anymore. It’s just like going to Ames or Norman. Except he’ll see some friends after the game is over. Over 30 years, it kind of dwindles, the emotion you have when you go back. 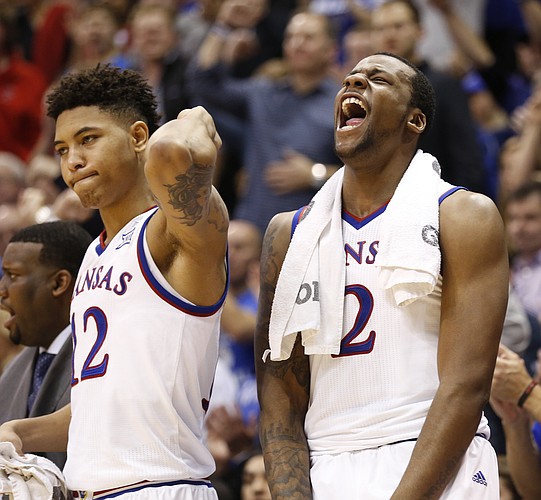 • A lot of intangibles go into having a good team and one that you can take for granted is: Self thinks the players actually like each other. He thinks guys are genuinely happy for each other and want their teammates to be successful. When guys get out of a rut, their teammates are happy for them.

• Devonté Graham has done a really good job of taking care of the ball — 28 assists, 3 turnovers in Big 12 play. Even though KU had 16 turnovers the other night, a lot came late, so Self thought they did a good job that night, too. Graham deserves a lot of credit when those numbers look good.

• When watching other Big 12 teams play, Self sometimes has “favorites.” But a lot of times when you wish for something to happen, some outcome, it ends up not mattering once it is late in the season. They just try to watch and focus in on what the Jayhakws need to do.

• A lot of combinations work for KU in the backcourt. As long as Mason or Graham is out there, it usually works out.

• With KU’s bench, the style doesn’t change when Greene, Alexander or Graham come in. Self looks at style more on the defensive end, in terms of who he thinks needs to be on the floor.

• When Self is recruiting, there are three things to look for: how athletic/explosive is a guy, can he shoot and is he tough? If you’re unsure about a guy, it comes down to is he tough and will he be a good teammate. With the “really good” players they’re recruiting, they are projecting for one or two years. KU has been able to get guys who develop and guys who can contribute immediately.

• Phil Forte III has improved his conditioning since he first arrived at OSU. His ball handling has improved, too. He can score off the move really, really well. And he is tough as nails.

— Listen to the complete press conference: Bill Self on Big 12 race, KU's progress, playing at OSU

To Self's point of players liking each other, I said this the other day. I don't think I have ever seen a bench explode like our benches do. Every year. Those kids are genuinely excited and happy for their teammates. Give credit to the coaches for continuously having a team atmosphere like that.

Many times I think our bench reactions are better than a lot of the top 10 plays on sportscenter. I'm biased, sure, but it's awesome.

While not a KU bench, it was also something to see TRob's rookie season 1-hand rebound and tomahawk dunk over the Laker's Dwight Howard. The Laker bench reaction was priceless. I think I saw it on youtube...

Love that Tarik reaction. There were a handful this season, but the one that stood out was when Tyler Self made that floater. They lost their minds