These guys again: No. 16 Baylor 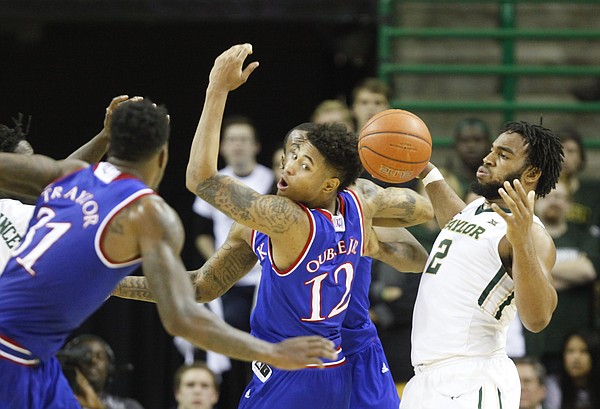 Kansas guard Kelly Oubre Jr. (12) tangles for a loose ball with Baylor forward Rico Gathers (2) during the second half on Wednesday, Jan. 7, 2014 at Ferrell Center in Waco, Texas. by Nick Krug

Early in Big 12 play, the Kansas Jayhawks got a glimpse of what the rest of the conference soon would learn: Scott Drew has a tough, talented team this season at Baylor.

KU won its conference opener for the 24th consecutive year back in January at Waco, Texas, but the Jayhawks escaped with a 56-55 decision at the Ferrell Center only after making some big shots late and figuring out ways to exploit BU’s half-court zone at times in the second half.

Since then, Baylor has moved up to No. 16 in the nation and comes into Saturday’s rematch at Allen Fieldhouse 18-6 overall and 6-5 in the Big 12, after losing its first two league games.

The Bears entered this week as one of the conference’s hottest teams, having won 5 of their last 6, but then they stumbled at home, with a 74-65 loss to Oklahoma State. Baylor allowed OSU to make 9 of 24 3-pointers in the loss, while the home team only hit 3 of 15 from deep.

Here are some trends from the Bears this season:

As a refresher, here are the Bears No. 8 Kansas (20-4, 9-2) has to worry about as the Jayhawks continue their chase for an 11th straight league championship. 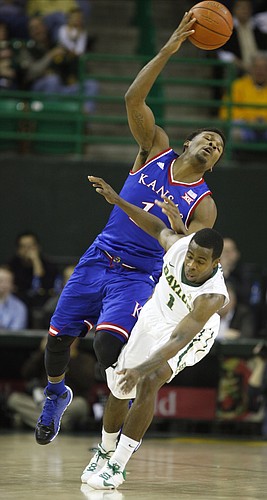 Kansas guard Wayne Selden Jr. (1) and Baylor guard Kenny Chery (1) collide at mid court while competing for a ball during the first half on Wednesday, Jan. 7, 2014 at Ferrell Center in Waco, Texas. by Nick Krug

He gave KU issues all night in the first meeting. You can bet his stat line will be memorized by the guys responsible for guarding him in the rematch.

In his last 10 games, Chery is averaging 14.7 points, after scoring 8.2 a game before that. Plantar fasciitis forced him to miss some games early in the season but he now looks back at full strength.

With 4 seconds left against Iowa State back on Jan. 14, he hit the game-winner in a 74-73 Bears victory.

Chery scored 19 points in the second half while hitting all 5 of his 3-point tries in a Jan. 31 beating of Texas.

Late in games this season, he makes a point to have the ball in his hands when the other team is fouling. He has made 23 of 26 free throws this season in the final five minutes of action.

Oklahoma State is one of the few Big 12 teams to figure out how to shut Chery down. He missed all 4 of his 3-pointers in the Bears’ loss to OSU and only scored 9 points in 30 minutes. 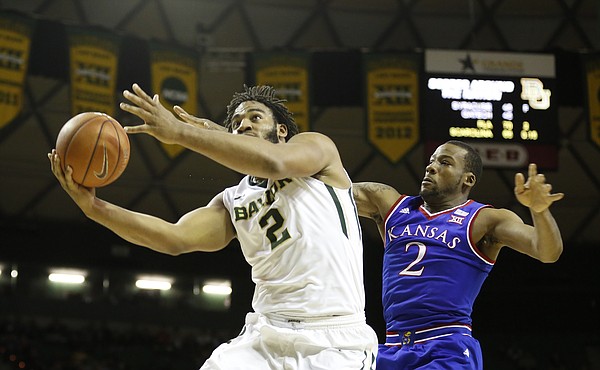 Just a reminder: Gathers is an absolute beast of a physical specimen and has broken out this season as one of the Big 12’s best interior players.

Bill Self said Gathers deserves to be in the conversation for the Big 12’s Player of the Year.

*— hoop-math.com update: Shocking news! Gathers leads Baylor in put-backs. Actually, the number is kind of incredible. He has scored 66 put-backs this season. Sixty-six. A whopping 39.6% of his shots at the rim come on put-backs.

The Jayhawks did a nice job of turning him into a non-factor the first time around.

Of late, O’Neale is averaging 14.0 points in his past 4 games, when he has connected on 19 of 34 shots since being held scoreless at OSU.

He was a big part of Baylor’s road win at West Virginia last week, contributing 15 points on 5-for-7 shooting, with 6 rebounds and 4 assists. 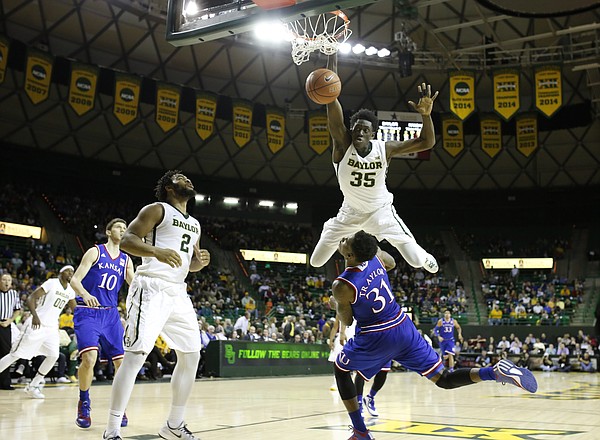 Another guy who didn’t accomplish much offensively vs. Kansas back in the first week of January, the long red-shirt freshman has made an impact defensively, with 35 blocks in his past 15 games.

Foul trouble early in games have limited Motley’s effectiveness. He averages 11.7 points and 4.8 rebounds when he makes it to halftime with one or no fouls.

When he has at least 2 fouls entering the break, he only averages 6.0 points and 3.6 rebounds.

Motley has even been more effective scoring the ball when he stays out of foul trouble: 35.3% when committing 2-plus fouls in the first half vs. 48% shooting when avoiding that. He had 2 first-half fouls vs. Kansas in Waco.

— hoop-math.com update: Motley loves finishing inside, where he has 54 field goals at the rim. Keep him away from point-blank range and he makes just 26.2% of his 2-point jumpers and 23.1% of his 3-pointers.

None by FanSided GIF

In his first 3 conference games, which included the loss to KU, he only had 1 assist against 5 turnovers. But in his last 8 games, Medford has 34 assists and 15 turnovers. Over the last 6 games, he has twice led Baylor in scoring and has 21 assists in that stretch.

But Medford played 33 minutes in the Bears’ home loss to OSU and only scored 1 point, missing all 5 of his field goals.

— hoop-math.com update: Of Baylor’s rotation players, Medford spends the least time taking shots in between the rim and the 3-point arc. Just 14.7% of his shots have been 2-point jumpers, while 31.4% have come at the rim and a the majority, 53.8%, have come from long distance. 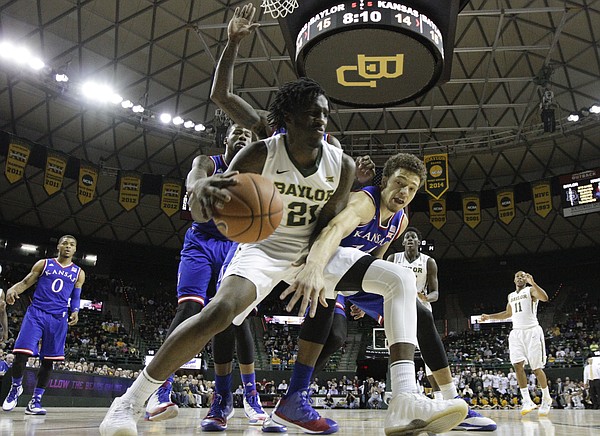 Baylor easily could start him, and he could probably start for any team in the Big 12. But Drew uses him as a guy he knows he can get production from off the bench.

Prince scored 20 points in the loss to OSU earlier this week, when he had his team-leading 18th double-figure scoring game of the season. He has scored 10-plus in a career high 8 straight games.

On the season, he averages 12.6 points a game, which ranks first in the power-five conferences among reserves.

— hoop-math.com update: He can create his own easy points. Only 52.1% of Prince’s 48 buckets at the rim have come off assists. One of his methods? Crashing the offensive glass. He has 19 put-backs. 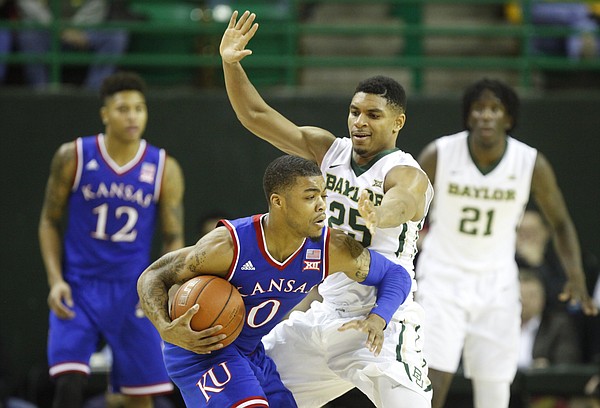 At times, he has proven an effective scorer off the BU bench. But the first game vs. KU certainly wasn’t one of those.

The red-shirt freshman is typically the first guard off the bench for the Bears, and he scored 11 in BU’s key road win against West Virginia last weekend.

— hoop-math.com update: Most of his shot attempts, 52.0% actually, come from long range. However, Freeman has connected on just 31.5% of his 35 3-point attempts.

If we can block out and limit Gathers Rebounds we can be the first over 75 against Baylor. Cliff needs to get position, not jump into him, and limit his put backs.

Big test for Cliff, I hope he starts again. I would also have Lucas off the bench before traylor to give him some size to deal with.

Benton does Howard have any specific responsibilities that will have to be handled by one of the other coaches? Like scout, bigs, things like that.

I've always wanted the students to break out in a "Your Coach is Scott Drew" chant during a Baylor game...

Seems like we'll see Greene quite a lot on the court.