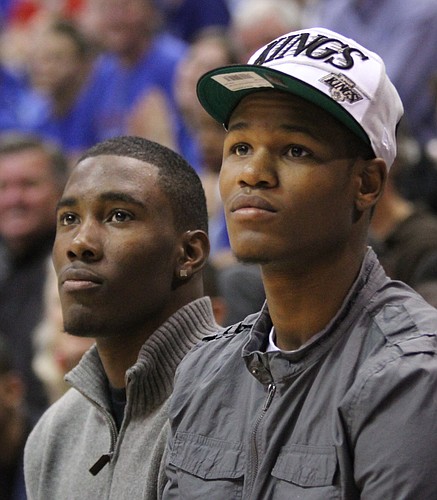 Kansas freshmen Jamari Traylor, left, and Ben McLemore watch the Late Night in the Phog festivities from the bench on Friday, Oct. 14, 2011 at Allen Fieldhouse. by Nick Krug

Kansas senior forward Jamari Traylor knows what a Final Four team looks like. He saw one up close his first year in Lawrence.

Traylor, a 6-foot-8 forward from Chicago, couldn’t play for the Jayhawks during the 2011-12 season. Like his classmate Ben McLemore at the time, Traylor entered KU’s basketball program as an NCAA partial qualifier. He could practice with the Jayhawks once the fall semester ended, but wasn’t allowed to suit up for games or travel with the team.

Traylor spent enough time around that national runner-up team to feel like a small part of its success. He witnessed how the team functioned and the kinds of intangibles that made it special.

So are there any similarities he sees between the 2015-16 Jayhawks and that Final Four team that finished 32-7?

“That team was a group of guys that just wanted to win,” Traylor recalled, “and they would do anything to go out there and compete. And defensively, I feel like, was the reason that team got so far, because at the end of the game when things would get close they hunkered down, they locked up. And I think that’s what we want to do this year.”

That particular Kansas team’s defense could prove difficult to replicate. In 2011-12, the Jayhawks held opponents to 61.7 points and 38% shooting. KU blocked 5.7 shots a game and averaged 7.3 steals. Opponents only made 39.8% of their 2-point field-goal attempts and shot 34% from 3-point range. 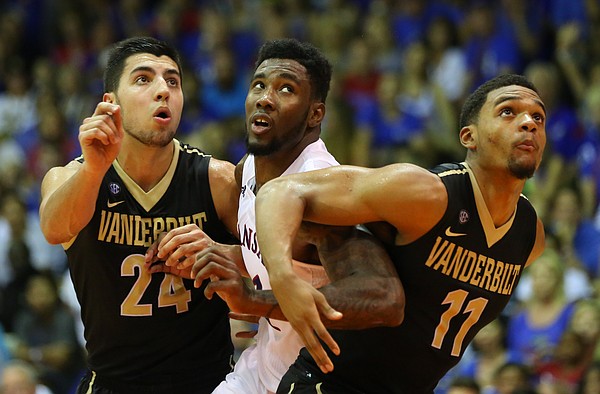 It’s obviously very early in the season, and Kansas (6-1) has yet to play with its full roster, due to the Cheick Diallo eligibility fiasco created by the NCAA and Brannen Greene now serving a suspension. But here is what KU’s numbers look like thus far. Kansas (playing at a faster pace than the ’11-12 team) is giving up 69.9 points, allowing opponents to make 40.9% of their shots and averaging 4.0 blocks and 7.7 steals. KU’s seven opponent have connected on 47.9% of their 2-point field goals, but have made just 29.3% from behind the 3-point arc.

Traylor said the hunger, focus and mental toughness of the 2012 Jayhawks made them a strong defensive unit.

“I feel like this team could be just as good,” he added. 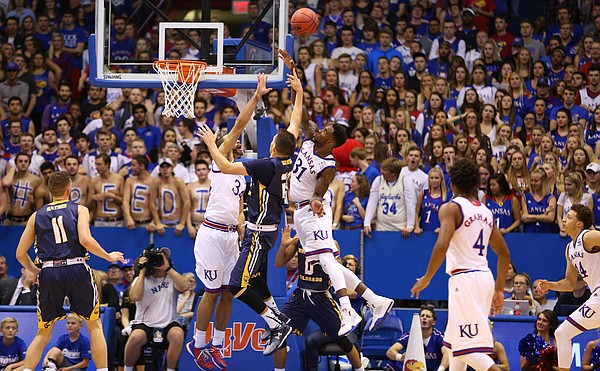 Kansas forward Jamari Traylor (31) and forward Perry Ellis (34) get up to defend against a shot by Northern Colorado forward Tanner Morgan (20) during the first half, Friday, Nov. 13, 2015 at Allen Fieldhouse. by Nick Krug

According to Traylor, there aren’t any obvious player comparisons to make between this year’s group and that Final Four roster.

The Jayhawks, ranked No. 2 in the nation this week, entered the season projected as a Final Four and national title contender, according to a number of websites and publications.

Traylor sees some important characteristics that could help the Jayhawks make a long NCAA Tournament run come March — something the Jayhawks haven’t been able to accomplish the past two seasons, when their season ended before the Sweet 16, in both 2014 and 2015. 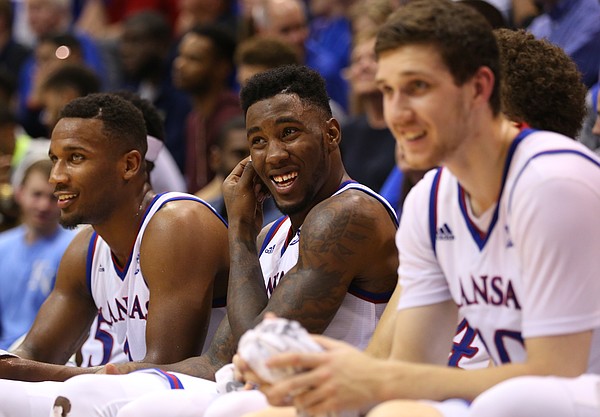 Kansas players Wayne Selden Jr., left, Jamari Traylor and Sviatoslav Mykhailiuk have a laugh on the bench during the second half on Wednesday, Nov. 4, 2015 at Allen Fieldhouse. by Nick Krug

“We’re a deep team, top to bottom. We’ve got guys at every position,” Traylor said. “We’ve got seniors and juniors — we’re an old team. And we pretty much know what it takes to get there, and we’ve got a great group of young guys, too, so pretty much we’ve got everything we need. We’ve got all the tools necessary, great coaching.”

Of course, the development of Diallo, a 6-foot-9 freshman from Kayes, Mali, in Africa, might play into KU’s potential — especially on defense — more than any other factor in the months to come. Traylor said Diallo has a unique set of skills that should help the Jayhawks’ already deep front-court rotation as the freshman grows more comfortable.

“He’s just a freak of nature,” Traylor said of Diallo. “He gets up and down the court, he runs like a deer. He’s gonna help us a lot. He can go out there and block shots. He’s young, so he’s got a lot to learn and everything, but his upside is crazy.”

The Jayhawks have plenty of promise this season, too. If they reach their ceiling, Traylor might actually get to play in a Final Four in his final year with Kansas.

No player from Kansas should ever graduate without having played in a Final Four.

Kind of hard when Bill Self has only two Final Fours.

Jamari. We are proud of you. From homelessness to soon to be college graduate. Unselfish player in every way. You represent everything NCAA collegiate level sports wants and is supposed to be. Congratulations on all you have accomplished. Glad you did it at Kansas.

It goes both ways, I guess. Traylor wouldn't have given the same chance (minutes) elsewhere. I'm sure he will reconnect with HCBS sometime in the future. I see very strong bonding there.

Jamari Traylor is awesome! I have thought so since he first came to KU!

I wish him nothing but the best! Whatever he does in his life he will bring nothing but credit to Kansas University!

Has Traylor contributed more to KU than Wiggins, Embiid, Alexander, Oubre or any other OAD that's played at Kansas?