Watch the line: Jayhawks need to improve free-throw shooting in weeks ahead 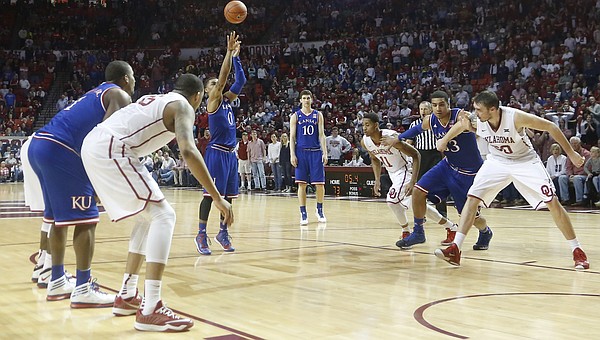 Basketball purists watching Kansas the past couple of games most likely noticed the Jayhawks missing out on easy points in their previous two outings.

KU shot 70 percent or better at the free-throw line in its first four games of the season, but the Jayhawks’ numbers took a nose dive in the Maui Invitational championship game against Vanderbilt. Kansas won its third game in three nights despite making just 12 of 22 at the charity stripe (54.5%).

But then the bottom fell out Tuesday night at Allen Field House, against Loyola Maryland, when the Jayhawks (5-1) connected on just 12 of 26 freebies.

The back-to-back poor outings have dropped KU’s free-throw percentage through six games to 69.3%. Not terrible, but not exactly ideal, either.

A little slump? Or a trend in the wrong direction? We’ll have to wait and find out. Free-throw shooting will at the very least be an interesting sub-plot in the coming weeks, as KU heads into Big 12 play in January.

As of Thursday, Kansas ranked 160th in the nation in free-throw percentage — basically middle of the pack, among 346 Division I programs. For a point of reference, national leader St. Bonaventure is hitting 84.4%.

We’re dealing with some small-to-very-small sample sizes, but seven of KU’s top 12 players currently are shooting below 70 percent at the foul line:

Of those, Ellis and Selden are the most troubling, because they will continue to be the Jayhawks getting to the line the most — along with Frank Mason III (and possibly Diallo). But they also possess the offensive prowess necessary to improve, perhaps drastically so. 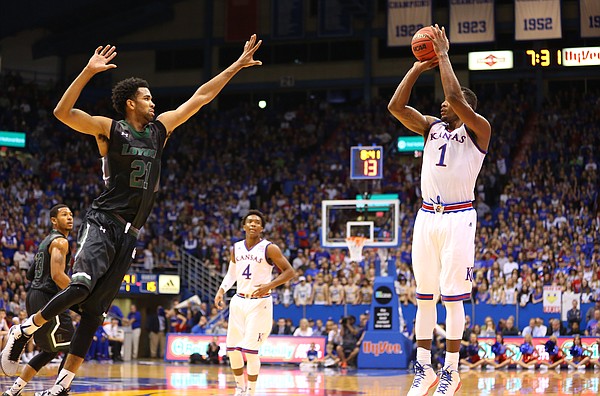 Kansas guard Wayne Selden Jr. (1) pulls up for a three against Loyola forward Jarred Jones (21) during the first half, Tuesday, Dec. 1, 2015 at Allen Fieldhouse. by Nick Krug

Selden shot just 5-for-10 against Vandy, missing four straight at the line in the final minute. So that’s where his potentially skewed numbers come from. And while you can’t rule out tired legs as the reason for his struggles on that night, nobody’s legs will feel fresh come February and March.

The junior guard, who has otherwise shot the ball great (54.8% field goals, 57.1% 3-pointers), will need to improve on his career free-throw numbers to make the best offensive impact possible. Selden shot 62.9% on free throws as a freshman and upped that percentage to just 65.7% his sophomore season. His stroke and strength make you wonder why he hasn’t broken the 70% barrier, but the way he has approached this season so far makes you think he is capable of busting through and becoming an even more well-rounded player. 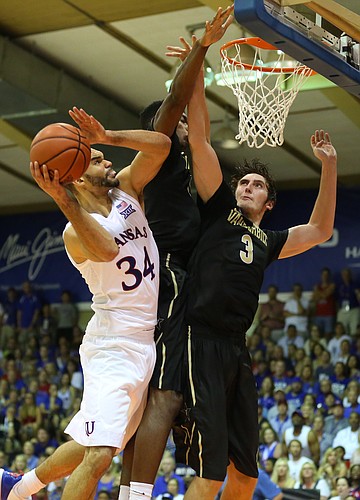 Kansas forward Perry Ellis (34) hangs for a shot against Vanderbilt center Damian Jones and forward Luke Kornet (3) during the second half, Wednesday, Nov. 25, 2015 at Lahaina Civic Center in Lahaina, Hawaii. by Nick Krug

A junior forward, Ellis on three occasions this season has missed three free throws and shot less than 60 percent: 2-for-5 vs. Michigan State, 3-for-6 vs. Chaminade and 4-for-7 vs. Loyola.

The real Perry Ellis probably exists somewhere between those two extremes. The 6-foot-8 senior from Wichita shot 73.8% as a freshman, 76.3% as a sophomore and 73% as a junior. Like Selden, he’s capable of better, and KU needs him to be.

The upcoming slate of non-conference opponents will mostly be easy enough for KU to get by with average to mediocre free-throw shooting, but games will get tighter and victories harder to come by before you know it.

In the past five years for coach Bill Self, the Jayhawks have made:

As KU has proven in that span, free-throw success doesn’t necessarily correlate perfectly with postseason advancement, but KU polishing up on its 15-foot open looks in the weeks to come will only help the Jayhawks down the road.

We’ll see in the weeks and months to come if the rest of the team can catch up with the Jayhawks who are off to better starts at the stripe (and if these guys can keep it up):

It would be interesting to find out what the numbers are for finishing at the rim for the past several Kansas teams. I bet if you did a correlation with FTs plus finishing relative to W-L and NCAA performance you find the teams with the worst correlations did not finish well. Two years ago vs. Stanford we went 4/16 at the rim and loss in the second round. I don't think a team that finishes below 70% in FTs and Finishes will ever amount to much when it comes to competing for a National Title.

I am always amazed when Perry and Wayne, and others, miss free throws and the camera pans Coach after the miss. He sits there looking calm, but you know he is just about to lose his mind. But, he tries not to react because to do so "puts even more pressure on the shooter at the line." I don't know if I could contain myself if I was coaching. I think at some point I would just lose it, go off, scream, etc. Maybe it is because that is what I basically do at home in my living room! Makes me crazy! OK. So the stats guys would need to take a look, but sometimes the percentages for the season don't tell all of the story. Let's see some stats at the line during conference games, at home vs. away, during the last 4 minutes, broken down by player, etc. I think that may even be more telling about who can shoot them in the clutch. Wayne and Perry have got to get over this because they are going to the line late in games. Free throw makes and misses are very often the difference between winning and losing in close games. Whatever happened to 100 free throws at practice for each total team miss for the game? Does coach still do this?

03 vs Syracuse comes to mind.

I will never forget that stat line.

This is Coach K's almost unbeatable strategy, especially late in the game. Have guards that can drive and shoot nearly perfect from the line. Works really well when they are behind because unless you play perfect defense, they will always pressure you. K counts on the fact that fouls will be called and favor the offensive player in most instances. And the above comment on rim finishes is spot on. Make your shot and get fouled, you get one free throw. Make half of those or better. Miss the shot, but get two free throws and only hit half, no good. The VCU game also comes to mind. The twins and Robinson missed some put backs.

And it definitely doesn't hurt that Duke is Duke and Coach K is Coach K so they get all the bail-out foul calls they could possibly want.

Perry has stated that "we" missed at the rim shots due to a lack of focus. Does this mean letting outside influences (intimidation) like where is the shot blocker or where is the physical contact coming from take away the concentration on the shot itself? Or does this mean that the shooter was thinking of something else entirely? This makes the benefit of having a big physical presence on defense a necessity for very successful teams.

You can negate the impact of this intimidation by not losing focus on the shot and actually requiring the defender to block the shot or foul you. You then benefit by either scoring, scoring and getting a 3 point opportunity or getting fouled and getting two free throws.

If you do not make the opponent pay for their sins, intimidation or fouling, by making the bunny or the free throws they win. There is an additional benefit of not being intimidated and drawing fouls. The rim defender may have to sit out and not be imposing his will at all.

To sum it all up, you need to go ahead and focus on making the at the rim shots and you need to make the other team pay at the line.

You do not do this by missing free throws or being intimidated.