The Day After: Outlasting Oregon State 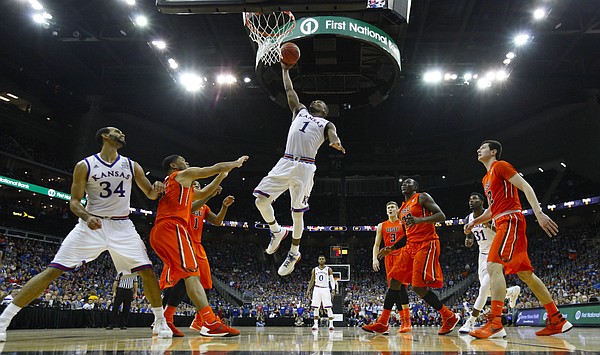 Kansas guard Wayne Selden Jr. (1) cuts through the lane for a shot against Oregon State during first half, Saturday, Dec. 12, 2015 at Sprint Center. by Nick Krug

As Bill Self said after Saturday night’s Kansas basketball win over Oregon State, those who witnessed the No. 2-ranked Jayhawks’ 82-67 win at Sprint Center saw the very best and the very worst of KU.

At least Self’s team, now 8-1, saved the entertaining portion for the final act. After scoring just 28 points in the first half and trailing by 11 at the break, the Jayhawks broke out of whatever funk they had contracted in Kansas City, Missouri, on Saturday and shot 21-for-32 in the final 20 minutes, when Wayne Selden Jr., Frank Mason III, Devonté Graham, Perry Ellis, Hunter Mickelson and Carlton Bragg played all of the meaningful minutes.

Self spoke in the days leading up to the Oregon State game about wanting to shorten his rotation, taking every opportunity he could to remind people how difficult (almost unreasonable) it is to play six big men. So we could’ve seen KU relying on eight or nine players instead of giving every player in the top 12 a shot when possible. After seeing Oregon State (6-2) easily handle the various lineups KU threw at the Beavers in the first half, however, Self took it to the extreme and stuck with his starting five and Bragg instead of mixing and matching. Perhaps the most unexpected aspect of that decision was the exclusion of KU’s typically trusted bench scorers, Brannen Greene and Svi Mykhailiuk, in the second half. Self made a point to show the players — and the fan base — that if certain guys are working better than others, he doesn’t mind keeping valuable players on the bench if that’s what it takes to get a win.

Now, will Self go to this extreme again? That will be something to watch in the weeks to come. 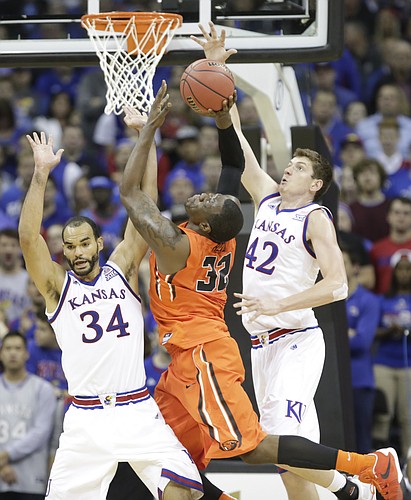 Kansas forward Hunter Mickelson (42) elevates to stuff a shot by Oregon State forward Jarmal Reid (32) during the second half, Saturday, Dec. 12, 2015 at Sprint Center. At left is Kansas forward Perry Ellis (34). Mickelson was called for a foul on the play. by Nick Krug

1. Hunter Mickelson made the most of his on-the-court job interview. Self admitted he hadn’t given his senior big man much of an opportunity to prove himself this season but that changed against Oregon State. Self seemed back to his old ways of preferring just about any big man but Mickelson in the first half, playing him only 4 minutes despite giving him the start. But Mickelson was so active early Self had to play him more in the second half and Mickelson responded with a 7-point, 6-rebound effort in 14 total minutes. One of the things Kansas has lacked since the days of Jeff Withey is a rim protector, and Mickelson gave KU a little of that, too, with 2 swats.

2. Wayne Selden Jr. continued his ridiculous offensive tear through the non-conference. As he started showing this past summer at the World University Games and continued to do to begin his junior season, Selden proved he has more confidence as a scorer now than he ever did during his first two seasons. Selden knocked down 5 of his 8 3-pointers against the Beavers, bringing his running season total to 30-for-50 (60% from deep). His 22-point effort upped his scoring average to 16.6 points. Selden now seems as reliable a scorer as Ellis — which no one would’ve thought headed into this year.

3. The Jayhawks handled Oregon State’s defensive pressure. Led by Gary Payton II and his 23 steals entering the game, OSU averaged 7.8 swipes before facing Kansas. The Beavers only came up with 2 takeaways against the Jayhawks, who had 11 turnovers in the win, and Payton left with a goose egg in that category (though he played well enough to put up 13 points, 11 rebounds and 7 assists). It’s difficult for opponents to take the ball away from KU when guys like Mason, Graham and Selden are handling the ball. 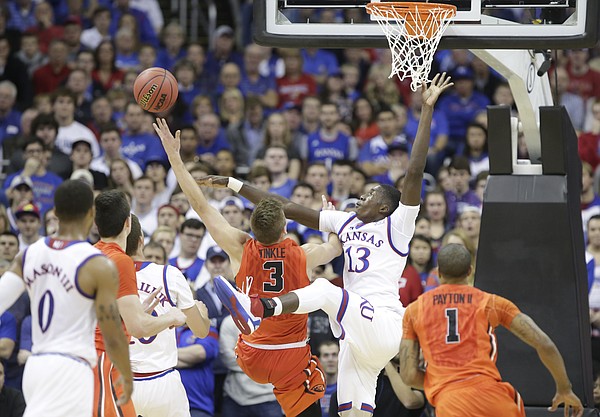 1. Likely the best NBA prospect on the Kansas roster, freshman big man Cheick Diallo didn’t play a single minute in the second half vs. Oregon State. Self considered using the 6-foot-9 freshman instead of Bragg, but thought Diallo couldn’t switch screens well enough on the perimeter to give KU the defensive look the coach wanted to implement. As a result, a big who many considered one of the most talented freshmen in the country coming into this season only played 7 minutes, scoring 2 points and pulling down a pair of rebounds. Diallo hasn’t yet reached his potential. A major reason for that is he’s just behind everybody else, due to the NCAA fiasco that kept him from playing early in the season. So when you sigh about Diallo, remember there are certainly better days ahead for the KU big man from Mali, Africa.

2. KU beat Oregon State in points in the paint, 34-28, but that number could have been much bigger. In the first half in particular, the Jayhawks struggled to finish inside. Drew Eubanks, a 6-foot-10 forward, just played active, smart defense around the rim and the Jayhawks, as they often have the past couple of years, failed to score over length. Kansas missed 9 layups in the first half — reminding everyone that Kansas can still run into scoring issues when its opponent has length inside.

3. Kansas still hasn’t become a great rebounding team, a characteristic that typically goes with winning basketball games. KU edged OSU 32-31 on the glass. To look at it another way — the way Self says he prefers — Oregon State missed 31 field goals and 6 free throws. That equals 37 opportunities for a defensive rebound. KU came away with 24 defensive rebounds — that’s a defensive rebounding percentage of 64.8%. For KU to continue to grow (and get more opportunities to push the pace with its three guards), the Jayhawks need to start controlling the glass.

It’s fall semester finals time, so the Jayhawks get a full week off from game action before returning to Allen Fieldhouse on Saturday for a 1 p.m. meeting with Montana, which apparently will double as a gigantic ugly sweater party. 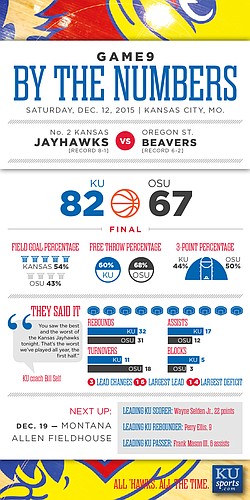 That is a great point and something I overlooked when trying to come up with it on the fly. Thanks, Brian!

Benton you are doing it all today.

Looks like we have played the toughest schedule so far this season. ISU with nothing really, OU with one against Nova which they won. WVU lost their only toughie.

At the BIG 12/SEC Challenge games the end of January Big 12 teams will have played eight conference games.

I project the standings as:

Our problem areas against league foes are, surprise. rebounding and free throw percentage. Only TCU grabs less boards than we do and only ISU and Texas shoot worse from the line.

Nice analysis - Having Mickelson play more will help with the rebounding deficiencies.

Another takeaway, I thought we had the most dunks of the season so far playing OSU. Great lobs, although the guards (and Ellis!!!) should've looked to pass to Diallo more. So many times he pointed to the sky or ahead of everyone towards the basket - but not one single pass was tossed to him. Gotta use the big athletic guy in the team more. Play like those NBA guards who trust their big mates (CP, Williams). We've got 2 versatile bigs, let's make 'em work! Hunter is a great shooter, but he'll be more dangerous if he remembers to use fundamental bball: fake (as coach Knight always reminds audience). He seems to fall in love with a J, he rushes to shoot when getting approached by a defender. Again, an opportunity for the coaching staff to teach individual skills to the bigs to be more versatile. Fake and drive to dunk hard - I haven't seen after years watching Mari, Mick or Ellis.

Again, I always measure defensive rebounds against the 08 team. Time and again, opponents got one shot against that team. It was good to see Perry have a decent rebounding night against, OSU, especially in the second half.