Cheick Diallo might be the next great Kansas big man 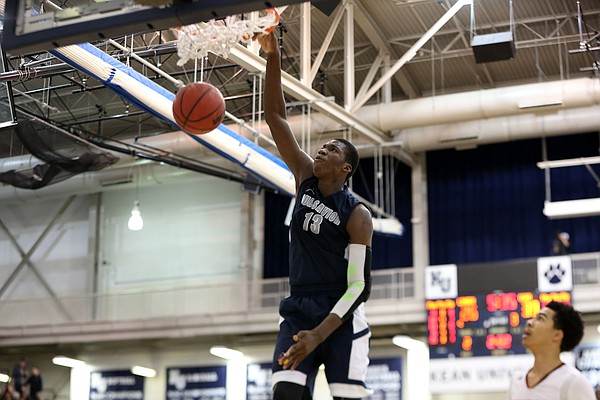 He’s 6-foot-9, 220 pounds. He was MVP of the McDonald’s All-American game and co-MVP of the Jordan Brand Classic.

And he just might be the next great big man at Kansas.

Originally from Mali, the five-star post player turned himself into one of the nation’s elite college prospects at Our Savior New American High, in Centereach, New York. He joins KU as the No. 5 overall talent in the Class of 2015, according to Rivals.com.

The big man stole the show at the McDonald’s all-star game earlier this month, where his name was called repeatedly, bucket after bucket, and he wowed the Chicago crowd with a fast-break spin-move on his way to an 18-point/10-rebound performance.

He even blocked some shots in the offense-oriented showcase and dropped a dime inside.

Diallo appears to have everything you’re looking for in a traditional big man: length, toughness, and the ability to finish at the rim on one end of the floor while intimidating the opposition from doing the same on the other end.

The guy even snags defensive rebounds anticipating the ensuing outlet pass he’s about to sling down the floor.

That makes him a perfect fit for KU coach Bill Self. Even better, the lean, young big fills a need for next season’s roster.

Self continually referenced the Jayhawks’ lack of an elite interior presence during the 2014-15 season. Unlike most Kansas teams, this one couldn’t throw the ball into the post and get a basket. Even worse perhaps, there was no rim protector waiting in the paint on defense.

That gaping hole in KU’s lineup likely is the very reason Diallo will be playing at Allen Fieldhouse next season.

"I felt like Kansas was the best place for me," Diallo told ESPN.com’s Paul Biancardi. "I can earn playing time right away. I played against Joel Embiid in high school and watched his development. I need to work on a lot of things and feel coach (Bill) Self can help my game. On my visit, the campus was great and the people were nice. I could see myself there."

Picture Diallo in a Kansas uniform, playing alongside all the returning Jayhawks and fellow freshman Carlton Bragg, and it’s easy to envision KU getting past the first weekend of the NCAA Tournament for the first time in three seasons. And back to the Final Four for the first time since 2012.

Here are a few more Diallo highlight reels as your mind wanders about the possibilities.

Who knew Bill Self knew how to recruit a player who filled a need.

Read Aaron, "earn PT and nice people" were also mentioned... I think with the struggles our staff have had recruiting this season, concern about it was fair game.

Brett I cannot take the enormous amount of time needed to bring you up to speed on our program. Your posts on here are all over the place, this could take a ton of work. I can only do so much sorry.

Thanks for the respectful post, but someone else is going to have to help explain this for you.

Actually, Brett's post is spot on. We have one of the top recruiting classes in the country. Not sure how 'struggled' plays into that RC. Unless you mean that we shouldn't have to wait this late to get a commit like every other blue blood school does. Just doesn't track.

The most exciting piece of his game is defense. He was a must have.

I am most excited for his defensive rebounding. Shot blocking is more of a luxury I feel, but defensive rebounding is an absolute NECESSITY. We got killed on the boards so many times last year. I did think Lucas was an improvement over Alexander late in the year, but Diallo looks to be a major upgrade (and hopefully Bragg can provide a rebounding presence as well).

I understand fellow fan's concerns but except most of the concerns bordered on outright lunacy. None of us know what is happening in the inner circles of Coach Self's recruiting and yet unless we sign 5 stars early, most think the sky is falling rather be patient and the chips fall where they may. Coach Self is the main man here and I'm going to fall and rise with this man until he is no longer our Coach. Call me a Kool-Aid drinker and so what? You don't think Coach Self worries and is trying his best to recruit the best student athlete possible? He has two 5-Star recruits and could still snag Brown but even if we don't get him, so what, I'm fine with the pieces we have. I'm tired of getting guys that think they're good enough to start and then leave because we recruit over them. If we want them to develop, we have to stop recruiting over them and give them a chance.

Go Coach Self. Welcome Cheick and thank you for letting the Clones down!

"None of us know what is happening in the inner circles", this applies to all (maybe not Mick :)) on here Danny not just your so called lunatics.

Why is it so horrible to question your program when you see them fall behind so many other schools in recruiting? Why is this lunacy? It is just an opinion Danny.

Why must someone root and support the team your way? Want their team to do better your way? There are so many folks who think the only way to comment on this site is to fall in line and act like the unconditional fan who loves everything we do, good or bad. Competition means to compete, not to foster acceptance of being beat. When did wanting the best, every single time you compete, become a bad thing? When did it become a form of Lunacy to want to win them all?

This is a basketball team, not someone's child.

Maybe you should just skip my posts... Just a thought.

I agree that slavish fandom can get irritating, but I don't understand the contention that KU has "fallen behind so many other schools in recruiting". Since 2013, Self has locked down 7 five-star recruits; up to that point, he'd absorbed a lot of criticism for being unable to do just that - i.e., for "falling behind other schools in recruiting". Now that we're recruiting in the stratosphere of Duke and UK, we're somehow floundering? It just doesn't make sense

It's not that it's so horrible to question, it's that those doing the questioning seem to think they know better than those making the big bucks to make the best decisions. I don't find it so much lunacy as laughable.

"Why is it so horrible to question your program when you see them fall behind so many other schools in recruiting? Why is this lunacy? It is just an opinion Danny."

KU hasn't "fallen behind" anyone. UK and Dook have always been right there with KU. KU has landed two blue chippers for the last three years.

"Why must someone root and support the team your way? Want their team to do better your way? There are so many folks who think the only way to comment on this site is to fall in line and act like the unconditional fan who loves everything we do, good or bad. Competition means to compete, not to foster acceptance of being beat. When did wanting the best, every single time you compete, become a bad thing? When did it become a form of Lunacy to want to win them all?"

This is just a massive, ridiculous strawman argument. You are projecting on an unprecedented level, even for you.

Diallo is going to quickly become a fan favorite. If Carlton Bragg can play at all, our frontcourt will put to bed many of the problems that plagued us last year. Finally giving Perry Ellis some help! With legimate post scorers besides Perry, they will all free each other up by not allowing the defense to focus on one player. Id look at offering Georges Papawhatever, the 7' kid from Greece.

And welcome to the new dorms this fall!

I think Tevin Mack, the former VCU commit, and the Greek 7 footer. Both would be great long term prospects. We need to start developing the next generation as we will lose 3 seniors after this upcoming year (Ellis, Traylor, Mickelson) and probably at least a couple early entrants (Diallo, possibly Selden, possibly Mykaliuk).

Did Chamberlain where No. 13 at KU? I know he did in the pros.

My question is what is the KU icon on the wall in the background of the first photo? What other KU could be representing at a HS/prep game?

Based on the caption of the picture, I'm going to guess the game was played at Kean University.

The ideal situation is that Cheick Diallo fits in seamlessly, the rim-protecting post the team lacked through so much of the season last year, like most imagined Cliff Alexander would this past season and that they also sign Jaylen Brown. The starting 5 would be Mason, Mykhailuk/Selden, Brown, Ellis, and Diallo with Graham, Bragg, Selden/Mykhailiuk off the bench with Lucas, Traylor, or Mickelson taking the rest of the big minutes. And that's not even including Brannen Greene

1) I'm more excited for the Diallo commitment than I have been for any prospect since Wiggins. Recalling Embiid and his disposition, there seems to be something special about these African players. Their learning curve is sharp, their footwork (thanks to backgrounds in soccer) is exceptional, and - maybe this is a general quality of the immigrant - their humility in new surroundings makes them eminently teachable. And when their confidence begins to accrue, they exhibit a fierce, pure competitor's instinct. American bigs in Diallo's physical mold (such as Cliff Alexander) are often cocky, mercurial, and hopelessly raw. I was guardedly pleased when we signed Alexander, nothing more.

Diallo, though . . . I have a feeling this was a seismic event for next year's fortunes.

2) What's with all the comments slavering for Jaylen Brown? Do we really need him? I'm confident that Svi (a lottery lock in his own right, by the way) will have a breakout year at the 3. I recognize that Brown's relentless attacking ability could help collapse defenses and set up opportunities for what promises to be an elite perimeter shooting team, but Brown would seem to bloat the roster, if you will.

I'll rejoice with everyone else if we get him, if only because I like having talent on our team and I may be absolutely wrong about what his addition would mean for our balance. But if he goes to Michigan or Kentucky, as is reportedly possible - well, so be it.

Won't he have to play more than one season to become the next great KU big man?