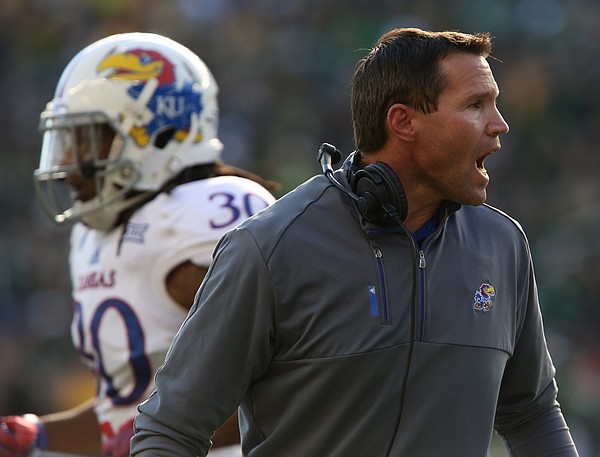 Kansas head coach Clint Bowen tries to keep his defense fired up after a Baylor score during the second quarter at McLane Stadium on Saturday, Nov. 1, 2014 in Waco, Texas. by Nick Krug

Kansas football assistant head coach and defensive coordinator Clint Bowen knows this spring will be critical in the overall development of the 2015 Jayhawks, even if there are more things on his to-do list than can possibly be accomplished for a young, rebuilding unit.

After going through just four practices, Bowen — also the safeties coach — sat down with the media Wednesday to discuss the state of the defense.

• The up-tempo approach of KU’s new Air Raid offense also benefits the defensive side of the ball.

With NCAA rules dictating how much time players can spend on the field, coaches have to find ways to get in as many plays as possible in the short amount of time they are out there.

“With what they’re doing offensively, it allows it to just play out naturally.”

• When installing the defense this spring, there are one of two ways to approach it:

No. 1: Put in a few things and master those.

No. 2: Examine as much of it as you can “real fast” and hope enough of it sticks.

The Jayhawks went with the latter, and are putting in as much as they can early, teaching it and getting it all on video. They recycle through that install again so the players can retain more each time through.

“It allows you to practice situational football a lot faster — right away, going into your first scrimmage.”

The Jayhawks will get into these kind of situations in the next few practices: third downs, red zone, two-minute drills.

• Through four practices, Bowen wasn’t ready to say any particular individuals have stood out, because the defense really has to start over as a group with the talent it lost from the 2014 season (see: Ben Heeney, JaCorey Shepherd, etc.).

The players that are here need to take pride in giving the unit an identity.

“At this point in time, I think they’re all in the same boat of trying to figure it out.”

Bowen just wants them being physical, playing hard and learning.

• On the roster as a whole, and on the defensive side of the ball, KU lacks depth. Bowen feels pretty good about what kind of 2-deep chart they will have, but the trouble comes beyond that.

“Those things are out right now.”

Bowen says you don’t want to wear out all of your top players by making them play different packages.

So this is the mindset they ned to embrace: 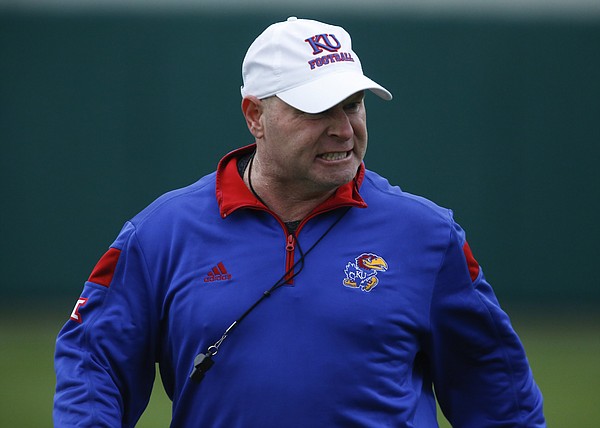 • With the new defensive coaches on the staff, they are all getting used to each other’s approaches and tendencies.

“We’ve got a great group of guys on the staff, and everyone’s working for the common goal.”

• Bowen and new co-defensive coordinator Kenny Perry were acquaintances before, knew each other. Now that they’re working together they’re meshing.

“That’s where you live as a DB coach. I think we always live on edge.”

• Junior corner Brandon Stewart, who just arrived on campus before the spring semester started, seems to have some skills: good feet, awareness, instincts and “can run a little bit.”

• The departure of would-be senior safety Isaiah Johnson was “a disappointment, but not a surprise.”

• Now that David Beaty is here leading the program, it’s easier to communicate with high school coaches in Texas.

A lot of those high school coaches in Texas are legitimate friends of Beaty’s. That helps in recruiting.

• As new coaches get to know each other, that’s usually an easy transition because they’re all in this profession to improve their program and help the players develop.

A lot of KU coaches are still in the process of relocating their families to Lawrence, buying houses and those types of things, so more of that camaraderie that comes with the job will show up even more once everyone is settled.

Not a fan of installing a little bit of a lot of stuff. KU is apparently changing base packages for the 8th time in 9 years. Get the basics of the new defense down, then start installing new wrinkles as the mastery of the base packages gets better.

It'd be one thing if this was a group returning a lot of players, it's not though. Throwing a bunch of new stuff at inexperienced players causes them to think. Thinking on a football field delays the reaction to what is seen and causes players to play a step slow.

You get the basics down to where running the base defense becomes second nature, players play faster and it's easier to add new wrinkles to the defense without slowing them down. At least that's always been my experience in coaching related issues.

No question it is a big decision on which way to go. They have decided playing fast and making quick decisions and learning to adjust quickly is as important as learning all the intricacies of the defense.

There is no doubt this team on offense and defense will be in a learning stage all year. The hope is they will get better as the year goes on. As Dale says, I trust the coaches to make the best overall decisions.