Getting to know West Virginia football

With all the positive vibes circulating in the Kansas University football program this week following the removal of Charlie Weis and installment of interim head coach Clint Bowen, it’s almost easy to forget that the Jayhawks actually have a very talented team waiting for them on Saturday.

West Virginia might have the exact same record as KU — 2-2 overall, 0-1 Big 12 — but the Mountaineers’ losses came by a combined 23 points. And those losses were against No. 3 Alabama and No. 4 Oklahoma.

Bowen and his Jayhawks will have all sorts of matchups and schemes to worry about at what figures to be a raucous Milan Puskar Stadium in Morgantown. Under fourth-year WVU coach Dana Holgorsen, the Mountaineers have 27 games with 400 or more yards of total offense and they’ve surpassed 500 yards 16 times. Through four games, they’re averaging 551.5 yards and 37.5 points a game.

The Kansas offense? Well, Bowen and offensive coordinator John Reagan have their work cut out for them: 359 yards a game and 15.2 points.

Here are five Mountaineers to watch. 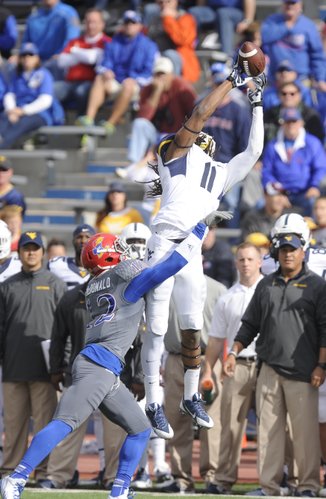 White is 6-foot-3, can sky even higher when necessary and is enjoying a monster season.

His season-low for receptions in a game is nine. That’s how much Alabama was able to hold him back. White went for 143 yards and a TD in a 33-23 loss to the Crimson Tide.

The athletic WVU leader has 42 catches, averages 15.1 yards a reception and went for a season-long score of 68 yards against Oklahoma.

At Big 12 media days this summer, White said he remembers well his team’s loss in Lawrence a season ago. 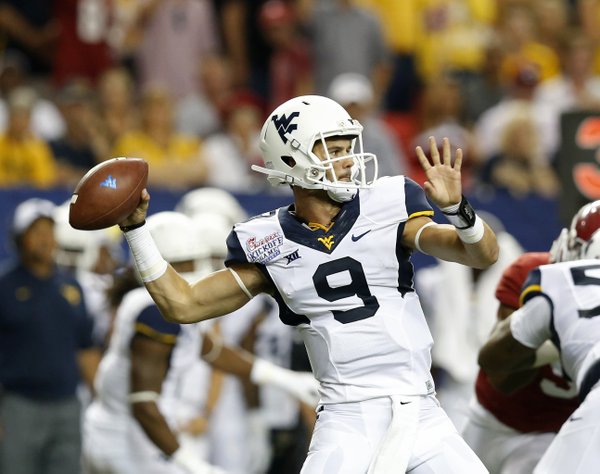 West Virginia quarterback Clint Trickett (9) throws a pass in the second half of an NCAA college football game against the Alabama Saturday, Aug. 30, 2014, in Atlanta. (AP Photo/Brynn Anderson)

Trickett has thrown for at least 348 yards in all four games this season and only Alabama limited him to one touchdown throw.

Against Maryland alone, Trickett connected on 37 of 49 passes for 511 yards and four touchdowns.

With 209 total tackles in his time at West Virginia, the 5-foot-11 safety is back at it this fall, with 22 unassisted tackles and 37 total.

Joseph racked up 13 tackles against Oklahoma in his last game, during which he also forced a fumble.

Last season against KU, he led WVU with seven tackles and recorded an interception.

The junior safety has 29 career starts in his 29 career games. He scored twice in 2013 on fumble recoveries. 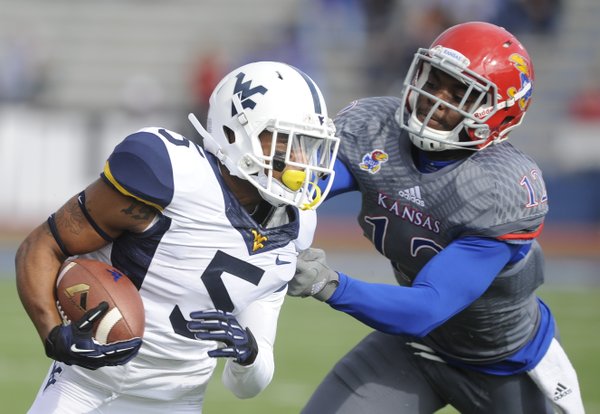 Kansas cornerback Dexter McDonald gets a hold of West Virginia receiver Mario Alford during the first quarter on Saturday, Nov. 16, 2013 at Memorial Stadium. by Nick Krug

A speedy weapon on offense and special teams, he ranks second on WVU in all-purpose yards thanks to his 207 yards worth of kickoff returns.

Alford caught a 30-yard TD pass from Trickett against Oklahoma, marking his third straight game with a touchdown reception.

More recently, he returned a kickoff 100 yards for a touchdown against Alabama. 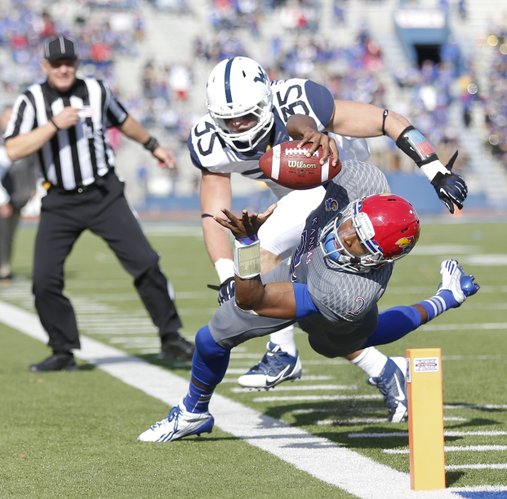 Kansas quarterback Montell Cozart narrowly misses the pylon for a touchdown as he is pushed out-of-bounds by West Virginia linebacker Nick Kwiatkoski during the third quarter on Saturday, Nov. 16, 2013 at Memorial Stadium. by Nick Krug

The WVU defense hasn’t spent a lot of time in opposing team’s backfields, but the 6-foot-2 linebacker has four tackles for loss, all coming in the team’s past two games — vs. Maryland and Oklahoma.

Kwiatkoski had a career day against Maryland, with 10 solo tackles, marking just the fourth time since 2002 the Mountaineers had a defender reach double digits in that category.

The middle linebacker also had seven solos against Alabama and currently has 30 total tackles this season, along with a pair of pass breakups.