Bill Self expects improved toughness, defense out of Jayhawks 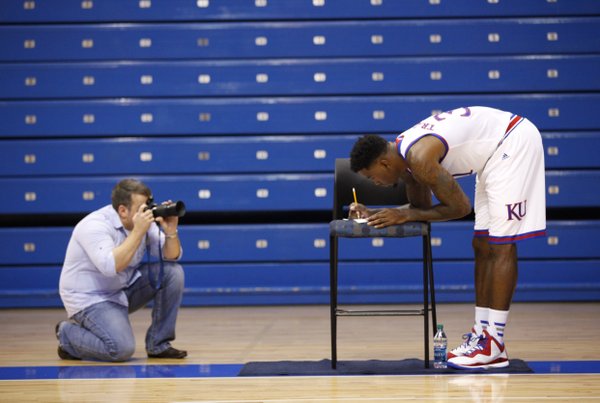 Kansas forward Jamari Traylor is photographed while filling out a humorous list of questions during Kansas basketball Media Day on Thursday, Oct. 1, 2014. by Nick Krug

Thursday marked the very unofficial start of the college basketball season at Kansas University, where Bill Self and the Jayhawks went through media day at Allen Fieldhouse.

Self provided some insight on what’s to come in the months ahead for KU, as well as some of the shortcomings that impacted last season, and what he, the coaching staff and the players learned from those experiences.

• KU has three smaller point guards. He doesn’t know yet what the norm will be. Kansas needs more ball-handling and play-making from its lead guards. That position didn’t play as he hoped in 2013-14. Wayne Selden, a bigger option, could play point with two big wings or Frank Mason or Conner Frankamp or Devonté Graham could be out there running things.

• The Jayhawks could be very versatile this season. Self sees them playing small a lot, but could play Kelly Oubre or a bigger wing player at the power forward.

• Junior forward Hunter Mickelson is a “prototypical” four-man. He faces up. The challenge will be for him to play bigger than he is. Self can’t see anybody beating Perry Ellis out for power forward minutes. With Mickelson’s skills, he’ll have to do some more things to see playing time. He is the team’s best shot-blocker. Mickelson blocked more shots than Joel Embiid did last year in his last season at Arkansas.

• Self likes who Ellis is. He doesn’t want to get him too much out of his comfort zone in some aspects. Ellis won’t be a vocal leader. Leading by example involves doing your job. If Ellis adds a little leadership to his repertoire, it will make KU a lot better. Self wants Ellis to go score. That’s who he is.

• Brannen Greene has really improved. He was very talented last year, too, and didn’t play much. He is in a loaded position, with Selden and Oubre and Sviatoslav Mykhailiuk. Greene is arguably as good a shooter as Kansas has. He still has to buy into guarding on the other end.

• So far Mykhailiuk is transitioning great. "Svi" understands the language maybe less than Joel Embiid did when he first arrived. The only knock on Svi is he is young. He is going to be really good. His youth could be a factor in how much he plays. A defender could knock him off his line pretty quickly. He may have played against the strongest competition, among current KU players, in his international experience.

• Alexander can be a physical player. He will have to learn how to guard and pick his spots. Self sees some similarities with Thomas Robinson and Alexander. Alexander has to get where he goes after every ball. If he plays his best and everyone else does, too, Alexander should be their most physical player.

• Without seeing this team going up and down a lot yet, Self doesn’t know for sure what the team and some young individuals will look like. But Devonté Graham is a well liked guy that pushes the ball up the floor and is certainly capable of challenging for starting minutes. Graham reminds him of Aaron Miles. He is a leader and can make a shot. His intangibles will probably allow him to play more immediately. The Marines who worked with the Jayhawks picked Graham as the best leader. But Oubre and Selden will be leaders, too.

• KU has a lot of things that will be good for recruiting, with the DeBruce Center and McCarthy apartments and new locker room renovations.

• Self used to do more micro-managing when he was young. Now that he is older he doesn’t think as much about things that don’t impact wins and losses, such as where guys sit in a locker room and things like that. 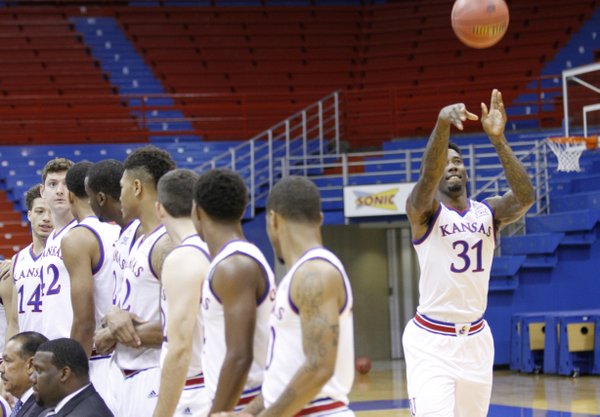 • Mason didn’t guard last year like he can. Graham can pressure the ball. Svi can slide his feet and anticipate defensively, he is so quick and athletic. Jamari Traylor does some things with pressure and running the floor, as well. Self isn’t a big press-defense advocate. You play a style that gives you the best chance to win in the postseason. When you play good teams they have good guards, and good guards often love to see a press. Full-court pressure won’t be a staple.

• Landen Lucas might have had as good an offseason as anyone. He is fighting for major minutes.

• Frankamp, in high school, was a volume shooter, as most high school stars are. Then he only got a few looks as a freshman and he felt like he had to make them. His whole play was based on whether he made a shot. Strength has been a factor for him some in the past, but he can help the team in other ways, besides shooting the ball. He had to make shots for minutes the way it played out last season. … Frankamp has to get stronger. Everybody has something they have to get better at. Strength and shooting are key for Frankamp becoming great.

• Self learned something through “The Program” they went through with Marines. KU has some guys who are really good at what they do and they don’t want to take away from who they are. Kansas needs Graham and Selden to be leaders.

• Selden, Self thinks, needs to play more consistently and knock down more shots from three-point range.

• It is hard for Self to make a complete evaluation of Oubre yet. And Oubre is good enough that he won’t be at KU very long. He can do some things that a lot of wings don’t typically do. He is a talented player.

• You always think about a starting five before the season begins. Whether he will tell anybody publicly right now is another thing. Guys have to earn it. By Big 12 play, Self has a team in mind but a lot has to do with how fast the young guys pick stuff up.

• Top to bottom, this Kansas team reminds him a little bit of the 2008 team. That team’s best player was Brandon Rush and he went in the NBA lottery. That team had pros. This is a team like that, there isn’t a top-three pick right now, but KU has a whole bunch of good players and depth. There isn’t much size, but they are skilled and deep. A lot of balance.

• There isn’t hoopla this year like they had with Andrew Wiggins, who handled it well. But KU has players that will be as good at the college level as Wiggins and Embiid. Kansas has more guys who can impact the college game this year.

• Self doesn’t know who would be a candidate to red-shirt this season. Right now he doesn’t think it will be a possibility.

• Late Night is always big for recruiting. It is big for the players, too. Guys look forward to it. Last year there were some issues with getting people in and those have been resolved. Only twice has KU had to turn people away, Self’s first year and last season.

• Self may talk about last year’s NCAA Tournament performance with this year's players. But that team wasn’t truly who the Jayhawks were. That team on the floor wasn’t a No. 2 seed. They didn’t have Embiid. That could be their motivation, to not let that happen again this coming postseason. But sometimes unexpected things just happen in sports. They didn’t have a lot of margin for error last season.

• Looking at the All-Big 12 preseason team, Self was surprised that not one of KU’s players got a vote other than Ellis. “That may be something that we tell our guys.”

• KU might be picked to win the Big 12 when those predictions come out. But Texas could be a top-5 team nationally and plenty of other teams appear to have top-25 talent.

• With the personnel KU had last year, the Jayhawks weren’t as tough as a typical Kansas team. The staff didn’t do a good enough job fixing that. Coaches will emphasize toughness this year. Personalities and youth probably had a lot to do with that last season.

• Just a bit off topic, on the Kansas City Royals… It’s awfully cool to watch. It’s fun to see guys having the time of their lives. They had the fastest guy in baseball (Jarrod Dyson) dancing at third base in extra innings on Tuesday and he hadn’t even scored yet. That’s cool. Self gets a kick out of all the strategy, too. The Royals are really good.

— Listen to the complete press conference: Self talks 2014-15 expectations at media day

Two freshman and a sophomore are our team leaders. Perry is just going to do his job. I like this team, but we will know a lot more about them after they play KY. There are other solid tests for us in the Non Conf. schedule too. Should be an interesting year, hope we fair better than last year. Coach Self will need to work his magic to find the right mix of this group that is for sure.

Holy smokes, I see Kansas has new uniforms again this year! And what's more, they might be the nicest uniforms Kansas has had since Roy Williams' coaching years. Very old-school look to them. I'd love to see the blue uniforms and the red uniforms (yes, there had better be some red unis; I can't believe we never wore red once last year!).

It would be fine with me if KU never wore red again. We're called big BLUE, not big red.

Disagree with both you and Len. Crimson is as much our school color as blue, and there is no reason not to wear it more than once or twice a year, especially for a rivalry game with Kansas State.

I got no problem with Red uniforms, Blue uniforms, White uniforms...Let's show people how versatile we are! Football looks good in our various colors (except gray), but we need to focus on gridiron competence and W's before we get too distracted with uniforms. Basketball can have some fun, as Self has earned that right. And this could also be coming from Adidas, contractually, trying to create a mktg buzz "did you see Kansas' new uniforms?", although some of the March Madness KU unis were a buzz-kill.

That being said, the new uniforms have clearly drawn from classic KU uniforms from 20+ yrs ago, and that is VERY cool. Wilt would be proud!

Disagree with you and Bryce, Crimson is only a trim color, if it was so important why is not on any championship banner hanging in the field house? Answer it is an accent color not a uniform color. Gray is ok, all blue too, but Red is reaching for us. I hated it back in the day and hate that Bryce keeps bringing it up...:)