Getting to know Stanford 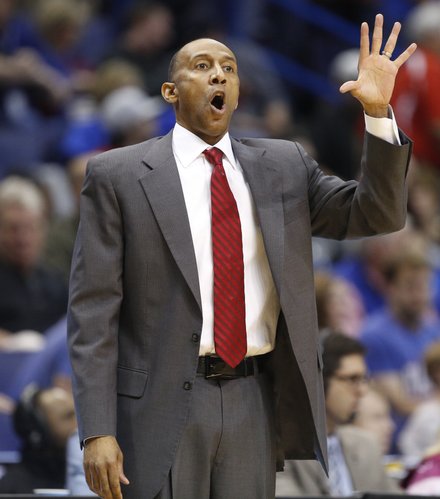 Stanford head coach Johnny Dawkins calls a play during the first half on Friday, March 21, 2014 at Scottrade Center in St. Louis. by Nick Krug

St. Louis — When this year's NCAA Tournament bracket came out, the popular assumption was Kansas University's men's basketball team would need to win a rematch with New Mexico in order to reach the Sweet 16.

So much for that theory. After surviving an early scare from Eastern Kentucky on Friday at Scottrade Center, the No. 2-seeded Jayhawks (25-9) earned a berth in the round of 32 against Stanford — not New Mexico.

The Lobos entered the postseason ranked No. 17 in the nation, and many observers thought UNM deserved a better seed than No. 7. But Stanford, making its first NCAA Tournament appearance since 2008 — and the first since sixth-year coach Johnny Dawkins took over — outplayed New Mexico early to get out to a 20-4 lead less than 20 minutes into the game.

Said senior forward Josh Heustis afterward: “Coach tells us, a lot of teams are just happy to be here. Only a handful of teams think they can actually win the thing. We’re going to be one of those teams.”

Stanford finished just 10-8 in the Pac 12, but is fairly battle-tested, having now played 17 games against teams which made it to the NCAA Tournament. The Cardinal are 8-9 against the field, with wins against Arizona State, New Mexico, Cal Poly, Connecticut, Oregon, Texas Southern and UCLA.

Beginning at 11:15 a.m. Sunday morning, Stanford has a chance to notch its biggest victory to date, against Kansas.

On Saturday, Dawkins talked about the opportunity that awaits his program: a trip to the Sweet 16.

"You know, it would be great. Whenever you play a program like Kansas you have an opportunity to play a storied program," Dawkins said.

"For us, Stanford has been to the Final Four before. They have been to the tournament a number of times. It would just continue to keep Stanford, you know, where we think Stanford belongs, one of the elite programs in the country.

"When you compete against a program like Kansas and you can have success, it puts you among those type programs and so it is an opportunity to continue to build on. Something that's been very good, you know, out in California at Stanford."

Stanford gets 87.2% of its offense from its starters, because three players who averaged double-digit minutes last season missed most or all of this season with injuries.

Meet the Cardinal Kansas will have to hold back to move on to Memphis. 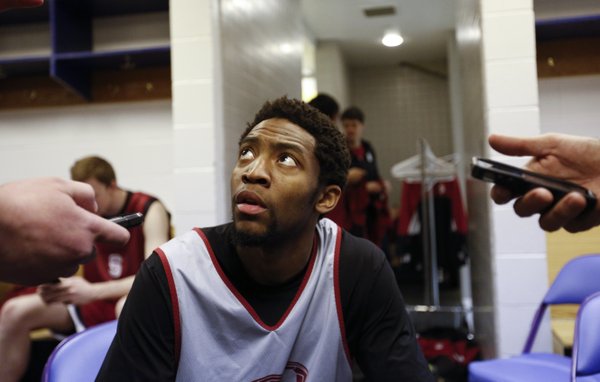 When Kansas freshmen Andrew Wiggins and Wayne Selden met with the media early Saturday afternoon at Scottrade Center, they hadn't yet gone through a Stanford scouting report.

So when a reporter asked them about how Randle could impact the game, it caught them a little off guard.

Replied Wiggins: "I am not sure right now. How about you, Wayne?"

Selden's response: "I am along with you."

Randle, who played all 40 minutes against the Lobos, led Stanford with 23 points, and he has scored at least 20 points in five of Stanford's last six games. 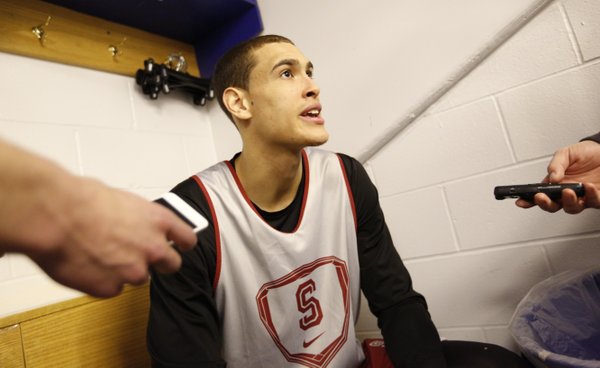 Stanford forward Dwight Powell, a Toronto native, talks with reporters about his familiarity with Kansas guard Andrew Wiggins, also from Toronto, in the team locker room on Saturday, March 22, 2014 at Scottrade Center in St. Louis. by Nick Krug

Powell, playing against a talented UNM front court, wasn't himself in his NCAA tourney debut. The big man only scored three points and missed all eight of his shot attempts.

The senior, who averages 13.9 points and 6.8 rebounds and has seven double-doubles this year, leads Stanford's all-time list of games played, with 133.

Powell's experience and production have twice landed him on the All-Pac 12 first team. 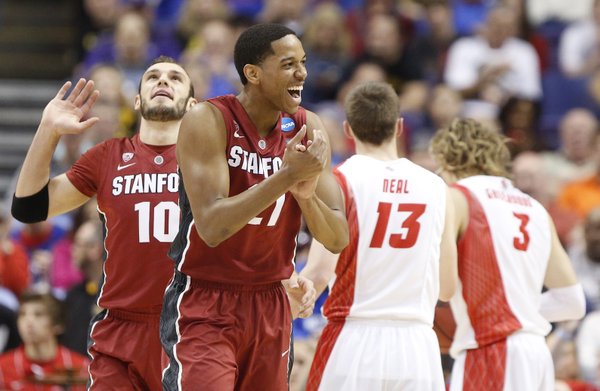 His seven rebounds led Stanford against New Mexico, and the 6-6 swingman averages 12.6 points and 5.0 rebounds.

Another 40-minute man against UNM, Brown scored 10 points and hit all three of his 3-point tries.

Here is what the red-shirt junior from Fountain Valley, Calif., had to say about facing Kansas.

Known for his impact on the defensive end of the floor and his team-leading work on the glass (8.2 rebounds a game), he also averages 11.3 points on 45.5% shooting.

Earlier this season, Huestis became Stanford's all-time leading shot blocker, and currently has 184 on his résumé, even though he is only 6-foot-7. He has swatted 63 shots this season.

The biggest man in a Cardinal uniform averages 7.1 points and 2.8 rebounds. His quick start against UNM made it easier for Stanford to advance, too. Nastic made his first three shots of the game.

He had made 16 straight shots over the course of five games before missing his final attempt of the first half. During said five-game stretch, he has made 94.7% of his shots. But he only took 3.8 attempts a game.

On the year, he hits 56.7% of his shots, with the vast majority of those coming in the paint.

The backup big man is the Cardinal's leading scorer off the bench at just 3.3 points a game.

In the Pac 12 Tournament, he scored 8 points on back-to-back nights against Arizona State and UCLA. But on Friday against UNM, he went 1 for 4, scored three points and grabbed six rebounds in 14 minutes.

Hopefully if Wiggins, Ellis ,Selden and the rest drive the ball, we will be able to get them in some foul trouble. It looks like Stanford does not have much depth.

Frankamp is due to breakout with his shooting game. Three of four 3s would help open the lane up and should put the Hawks into the round of 16.

Frankamp seems to be "aiming" the ball. He needs to just relax and shoot.

Next year, I am guessing that he makes roughly half his threes.

40 minutes worth of tv time outs might help Stanford.

congrats to Stanford....they got rid of their Native American mascot and they're still pretty good. anyone listening?