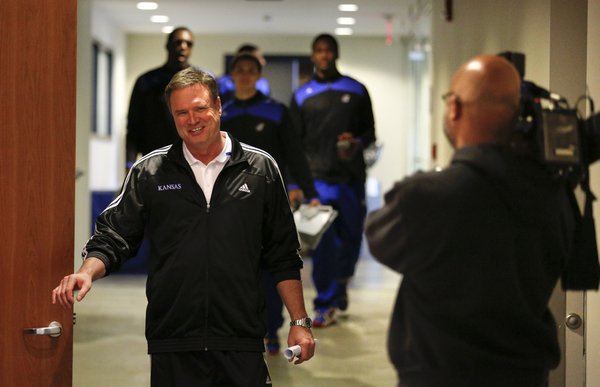 Kansas head coach Bill Self smiles as he walks past a television camera following the NCAA tournament selection show, Sunday, March 16, 2014 at Allen Fieldhouse. Kansas, a No. 2 seed in the South Regional, will face No. 15 seed Eastern Kentucky on Friday in St. Louis. by Nick Krug

In the realm of college basketball, March is known for its madness.

Kansas University coach Bill Self experienced a little of that himself Sunday evening after the NCAA unveiled the 2014 national championship bracket.

Even though Self barely had time to read up on KU's Friday opponent, Eastern Kentucky — let alone scout the Colonels by watching some game video — a room full of reporters awaited him at 6 p.m. inside Allen Fieldhouse to talk about the matchup between No. 2-seeded Kansas (24-9) and the No. 15 seed, EKU (24-9), out of the Ohio Valley Conference.

Here are the highlights of the Q&A, in bullet-point form:

• Self kind of thought Kansas would get a No. 2 seed. But he still thought KU had a really good chance of getting a No. 1 seed. If things had happened differently in some of the other conference tournaments, maybe the Jayhawks would have got consideration for the most sought after seed line.

• In KU's pod, New Mexico looks better than its No. 7 seed. Self hopes KU has a chance to play UNM or Stanford in the round of 32, but the Jayhawks' focus needs to be on Eastern Kentucky and defending the 3-point line. Self has already learned that EKU has four starters who shoot 3-pointers. They're a lot like Iowa State in that aspect.

• Sometimes when you play close to home there are more distractions. KU experienced that some last year, in Kansas City, Mo., for its first two NCAA games. Friday's games in St. Louis will be some of the hottest tickets ever for the first two rounds. Kansas, Kansas State, Kentucky and Wichita State are all playing there. (All except KU are competing in the Midwest region.)

• KU has been in the same city as K-State for the NCAA tournament before. It will be interesting. You wonder if fans from both sides of the Sunflower Showdown will cheer for their rivals.

• Self couldn't believe SMU and Larry Brown didn't make the tournament. When it all played out on the selection show, Self though North Carolina would play SMU. But he forgot Providence hadn't been announced yet. … That's what Brown thought would happen (a Roy Williams and UNC vs. Brown and SMU game) when Self spoke with the former KU coach on Sunday morning.

• On the other hand… Self was really happy to see Danny Manning's Tulsa team earn a spot. Tulsa is in the same region as Kansas, as a No. 13 seed, and will face UCLA on Friday.

• Kansas needs to play with high energy all the time. When you do that you can camouflage some mistakes with this group. Iowa State might've beaten anybody the way it played Friday in the Big 12 semifinals. KU might've been better off giving the Cyclones some "dare" shots, instead of letting ISU get inside of them.

• Looking at a potential rematch with New Mexico, that first meeting (an 80-63 KU win at Sprint Center) was a long time ago, on Dec. 14. Self doesn't know how much of an advantage either team would have should each advance.

• With a young team, there is potential for some distractions at this time of year. The most focused team Self has ever had was in 2008. That was a "wild crew," but they did everything the coaches asked and trusted them. It's great to have rules, but sometimes players think rules are great for everybody else but themselves. That's when you start getting distractions.

• Self didn't know which regional KU would end up in. No matter what one you end up in, you always think that the committee didn't do you any favors. But the Midwest (No. 1 Wichita State, No. 2 Michigan, No. 3 Duke, No. 4 Louisville, No. 5 St. Louis) looks really tough.

• There are more good teams and less great teams this season. Florida is a great team. The bottom line: everybody in the field can be had. This year, there are more good, solid teams that can beat what are perceived as the better teams.

• Joel Embiid's status remains the same. He feels better. Self doesn't feel optimistic Embiid would be able to play this weekend. But he is optimistic about the following weekend (Sweet 16). His availability is all symptom-related and he has responded very well of late.

When are you "jayhawk" fans going to realize that the belt buckles are NEVER going to cheer for us. They despise everything about KU. I know it isn't seen in eastern Kansas, but the hate out in western KS is glaring. Time to stop focusing on a school that isn't even our conference anymore, and know the real enemy.

The real enemy is? KU team itself?