Getting reacquainted with Oklahoma State 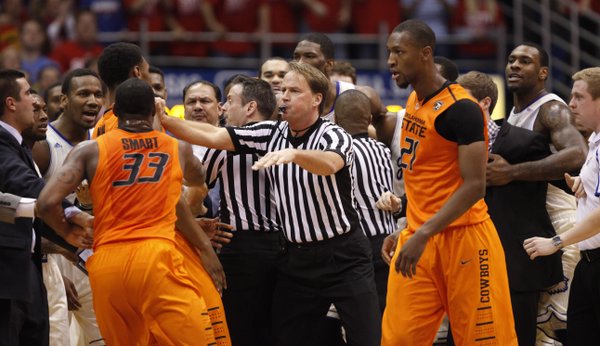 Game officials break up a skirmish between the Kansas and Oklahoma State players during the first half on Saturday, Jan. 18, 2014 at Allen Fieldhouse. by Nick Krug

What a way to kick off the month of March. The Cowboys (18-10 overall, 6-9 Big 12) have not lived up to their potential this season — they struggled even before Marcus Smart got suspended for his altercation with a Texas Tech fan — and this ESPN College Game Day matchup doesn't have the ramifications most thought it would before the season began. Still, you won't find a much more dangerous bubble team in the nation right now than OSU. Time is running out for the Cowboys to prove they belong in the NCAA Tournament (despite losing seven straight games from Jan. 27 to Feb. 17), and nothing would solidify their spot in The Big Dance more than beating No. 5 Kansas (22-6, 13-2).

Gallagher-Iba Arena figures to shake with noise as long as Oklahoma State can stick around with Kansas, and the Cowboys have enough talent in their backcourt to beat any team in the country.

Since Smart's return to the lineup, OSU has blown out the two teams at the bottom of the Big 12 standings, Texas Tech and TCU.

Even though the Cowboys have lost 10 times, eight of those were by two possessions or less, including two overtime losses: 3OT vs. Iowa State and OT at Baylor. Four losses were in one-possession games.

Since Travis Ford took over at Oklahoma State in 2008-09, the Cowboys are 9-10 at home against Top 25 teams. One of those victories came in November vs. Memphis. But the Cowboys are only 2-4 against ranked opponents overall this season.

For the Cowboys to earn the kind of hey-look-at-us victory that has eluded them to date, they will need significant production from their top four leading scorers. So let's get reacquainted with Smart and his highly skilled allies, who would like to keep the Jayhawks from winning the Big 12 outright today in Stillwater, Okla. 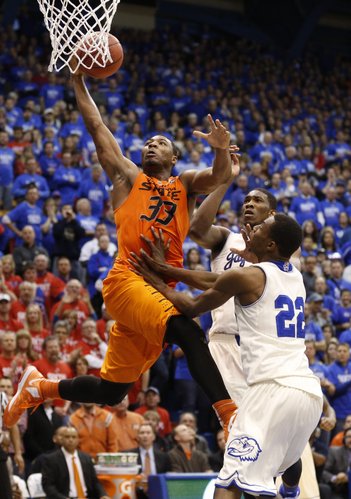 Oklahoma State guard Marcus Smart goes to the bucket against Kansas defenders Joel Embiid and Andrew Wiggins (22) late in the second half on Saturday, Jan. 18, 2014 at Allen Fieldhouse. by Nick Krug

One assist shy of a triple-double in OSU's two-point loss at Kansas, the troubled soon-to-be NBA lottery pick put up a great stat line despite missing 11 of his 14 shots.

Smart is strong in every facet of the game. In his two appearances since serving his three-game suspension, he has delivered 16.5 points, 8.5 assists, 5.5 steals and 5.5 rebounds. 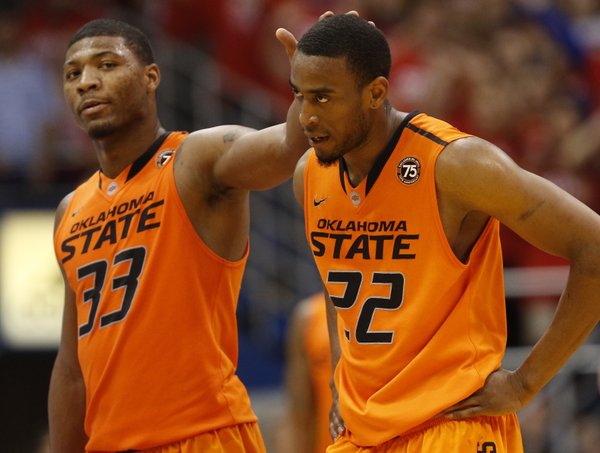 Oklahoma State guard Markel Brown (22) walks off the court after his second technical with teammate Marcus Smart during the second half on Saturday, Jan. 18, 2014 at Allen Fieldhouse. by Nick Krug

Brown is the first player in OSU history to record career numbers of 250 assists, 100 steals and 100 blocks. And he is only the second Cowboy in the program's record books to get to 500 career rebounds (Brown has 555) playing under the height of 6-4. The other was Randy Rutherford. 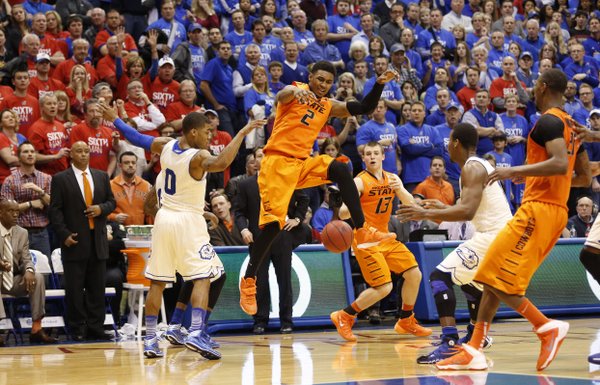 Oklahoma State forward Le'Bryan Nash loses the ball before Kansas defenders Frank Mason (0) and Wayne Selden on the final possession as time expires during the second half on Saturday, Jan. 18, 2014 at Allen Fieldhouse. by Nick Krug

Not that long-range daggers are his specialty, but Nash had a chance to defeat Kansas with a buzzer-beating 3-pointer at Allen Fieldhouse in January. However, on the Cowboys' final possession, he was stripped by Frank Mason (see above photo).

This season, Nash averages 14.4 points and 5.8 rebounds. He's a 52.7% shooter, but doesn't have to be worried about behind the arc, where he has missed all six of his attempts. 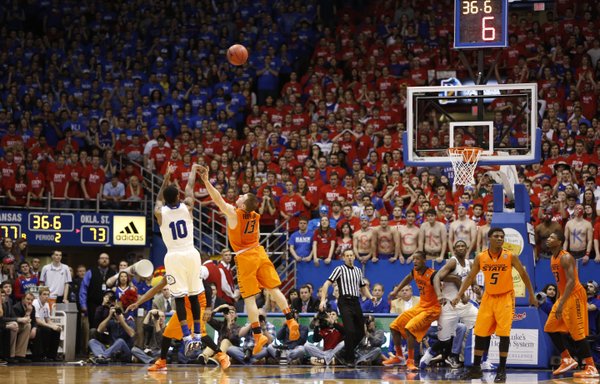 Kansas guard Naadir Tharpe puts up a three over Oklahoma State guard Phil Forte with seconds remaining in the second half on Saturday, Jan. 18, 2014 at Allen Fieldhouse. Tharpe hit the three to widen the Jayhawks' lead. by Nick Krug

A sub the first time these two teams met, one of the most dangerous 3-point shooters in the country can burn opponents from the opening tip now that he's a starter.

The 5-11 guard makes 3.1 3-pointers a game in Big 12 action. He torched Kansas for seven the first time around. He's coming off a 5-for-10 performance at TCU, and he made all six of his 3's at Oklahoma in January.

In 86 tries at the free-throw line this season, Forte has only missed nine times. His 89.5% success rate leads the Big 12. 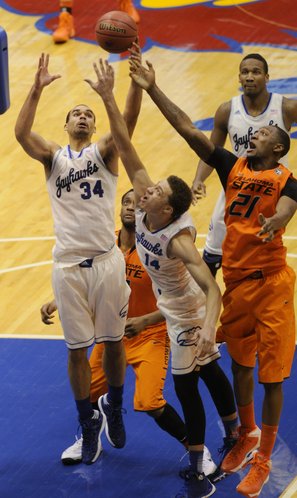 Essentially the lone post player for OSU, the 6-8 forward only had 1 rebound in 38 minutes at KU, back in January.

Murphy averages 6.4 boards this season and surely will make a larger impact in Stillwater. In his last five games, he's averaging 9.8 rebounds to go with 7.2 points.

About 31 percent of his rebounds this season come on the offensive glass, and he makes 57% of his shot attempts — all of which are 2-pointers. 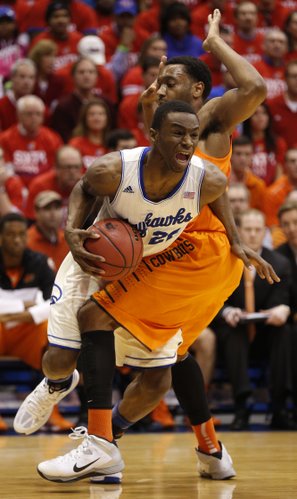 Kansas guard Andrew Wiggins is fouled as he drives around Oklahoma State defender Brian Williams during the first half on Saturday, Jan. 18, 2014 at Allen Fieldhouse. by Nick Krug

Earlier in the season, Williams started for Ford, but that's no longer the case.

After scoring a season-high 15 points against Iowa State, Williams has gone scoreless in three of his last six outings and hasn't played more than 12 minutes since being moved to the bench.

Regarding Wichita State as a rival: This OSU match is a rivalry dating back to Allen vs Iba, two men who didn't care too much for the other.

The OSU games have an shown "extra" nastiness dimension which along with the Self alum, Smart backflip/flop additives makes for more drama. Both Phog Allen and Henry Iba are extremely revered and always referred to with Doctor title preceding by former coaching protégés. I was not aware that Allen and Iba had differences, kool information, thanks.

Don't know if Tharpe, Mason, Selden and Conner can score with Smart, Brown, and Forte at Gallagher Iba. Andrew will offset-plus Nash and Perry/JoJo will have to make up the rest and certainly can.

After being disappointed with the Texas game competitiveness this may be one for the ages. I don't want to see any T's necessarily but a couple of square offs may be coming.

Mr. Keegan, trying to make up for the Praise but don't Raise comment a few weeks ago.

It would be nice to see us play this game as a prep for a NCAA sweet 16 game. Tough team, tough place to play, can we overcome all the noise and win the game.