Getting reacquainted with Iowa State 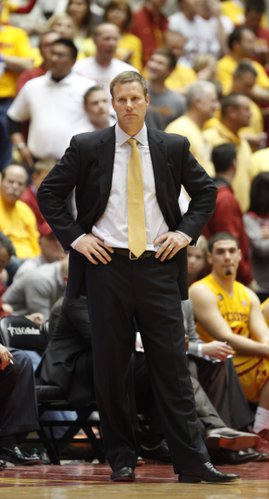 There is a reason Iowa State men's basketball coach Fred Hoiberg looked annoyed by the end of the night on Jan. 13 at Hilton Coliseum.

One of the better offensive teams in not only the Big 12, but also the nation, the Cyclones — who lead the Big 12 in scoring, at 84.8 points a game — went uncharacteristically cold against Kansas in a 77-70 home loss.

Free throws? Iowa State shoots 70.3 percent for the year. That night? Not that far off, but still below average, at 64.7 percent.

But the stat that had to hurt the most was three-point field goal percentage. The Cyclones have hit 35 percent from deep this season — 157 makes on 449 tries. Against Kansas, though, they missed 21 from behind the arc. Four-for-25. Sixteen percent.

Iowa State missed so many shots that it typically makes that the Jayhawks won a Big 12 road game even though they turned the ball over 24 times.

As usual, turnovers weren't an issue for the Cyclones against Kansas (they committed eight and totaled 12 assists). ISU averages 18.2 assists a game (first in Big 12, second in the nation to Creighton's 18.6) and the Cyclones are elite in assist-to-turnover ratio, too. At 1.75 assists for every turnover, ISU leads the Big 12 and is second in NCAA Division I, behind Creighton's 1.85.

ISU's loss to Kansas marked the second setback in a three-game skid, but the Cyclones recovered this past Saturday by beating Kansas State, 81-75, in Ames, Iowa. Wouldn't you know it, they were on from downtown, going 9-for-18 from three-point range.

Their four three-point baskets against Kansas and 16-percent shooting from long range in that loss are both season lows, and the Cyclones average 8.72 successful threes a game. So don't expect Iowa State's top players to be shy about hoisting from deep in tonight's rematch at Allen Fieldhouse, where No. 16 ISU (15-3 overall, 3-3 Big 12) will try to beat No. 6 Kansas (15-4, 6-0) in Lawrence for the first time since 2005. 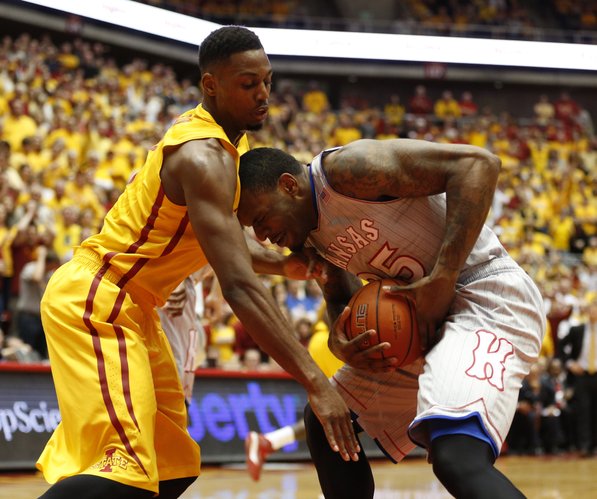 Kansas forward Tarik Black pulls a rebound from Iowa State forward Melvin Ejim during the first half on Monday, Jan. 13, 2014 at Hilton Coliseum in Ames, Iowa. by Nick Krug

Ejim leads the Big 12 in scoring (17.9 points), has posted double digits in 20 straight games and has scored 20 or more seven times this season. He does it by shooting a high percentage (51.5 percent) from the floor and scoring at the free-throw line, where he makes 77.3 percent.

The versatile forward also snags 7.3 rebounds a game, passes out 2.0 assists and has hit 22 three-pointers.

If he remains at the top of the Big 12 scoring list, he'll be the first Cyclone to lead the conference since Marcus Fizer, who did it back-to-back seasons in 1999 and 2000. 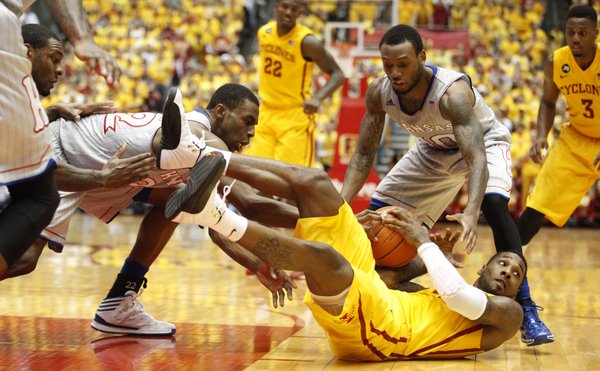 Kansas guards Andrew Wiggins, left, and Naadir Tharpe look to tie up Iowa State guard DeAndre Kane during the first half on Monday, Jan. 13, 2014 at Hilton Coliseum in Ames, Iowa. by Nick Krug

Named to the Wooden Award Midseason Top 25, Kane does it all. The savvy guard averages 16.3 points, 7.1 rebounds and 5.8 assists. In fact, he's the only player in the nation averaging at least 16 points, seven rebounds and five assists.

What's more, his scoring average has gone up, to 19 points a game, in conference play.

Kane doesn't take a ton of threes, but he has hit 16 of his 46 tries. Athletic and strong off the dribble, as well as in transition, he shoots 49.2 percent from the floor and forces opponents to foul him (he has made 86 of 135 free throws).

Kane will take his man's lunch, too. In his last six games, he is averaging 2.6 steals.

The big man with range recovered well from an off night against Kansas. In ISU's two games since, Niang has gone 13-for-25 from the floor and 8-for-13 from three-point land. He has helped the Cyclones make 20 of 50 threes since their forgettable three-point shooting night against KU.

Niang, who has scored 18 points in two straight games, averages 15.4 points and 4.2 rebounds. Plus, the big guy can pass the ball with purpose. Averaging 3.7 assists, Niang is the only non-guard among the Big 12's top 10 assist leaders, where he currently ranks eighth. 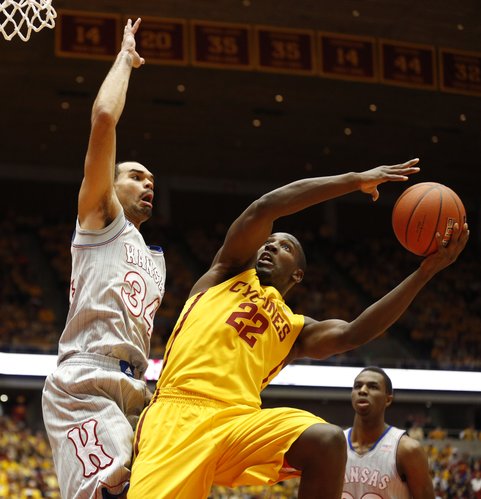 Kansas forward Perry Ellis defends against a shot from Iowa State forward Dustin Hogue during the first half on Monday, Jan. 13, 2014 at Hilton Coliseum in Ames, Iowa. by Nick Krug

A high-energy, JUCO transfer who took no time fitting in at ISU, his 9.3 boards a game are second only to Oklahoma's Ryan Spangler (10.1) in the Big 12. Hogue grabs 2.4 of those a game on the offensive end of the floor.

He's a capable scorer, too, averaging 11.9 points. Hogue has scored in double figures 12 times and put up four double-doubles this season.

The guy only averages 7.7 points a game, but he leads Iowa State with 34 three-pointers this season. His 42 percent accuracy from three-point range is fourth-best in the Big 12.

Eight times this season, he has made multiple three-pointers in a game. If he can give the Cyclones a little offensive spark this time around, they just might be able to keep up with KU. 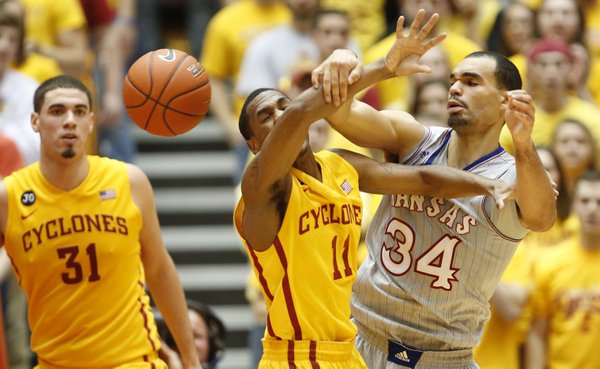 Kansas forward Perry Ellis battles for the ball with Iowa State guard Monte Morris during the first half on Monday, Jan. 13, 2014 at Hilton Coliseum in Ames, Iowa. At left is ISU forward Georges Niang. by Nick Krug

The freshman's playing time has increased as Hoiberg's confidence in him grows.

Morris averages 6.3 points, 2.2 rebounds and 2.9 assists. In Big 12 games, he is shooting 53.3 percent, but does just as much good for the ISU offense with his ball-handling. His assist-to-turnover ratio is 9.5-to-1 in conference games. In his last 328 minutes on the floor, he has committed only five turnovers, while dishing 42 assists.

Another key freshman off the bench for ISU, his claim to fame these days is making four of his six threes in a win over Kansas State on Saturday.

Like Morris, Thomas takes care of the ball. While his averages of 6.7 points and 2.6 rebounds provide a little production off the bench, what's really impressive is he has only turned the ball over one time since Iowa State won at BYU, back on Nov. 20. The lone mishap came on Saturday against K-State, breaking a streak of 13 straight turnover-free games.

Personally, I think KU's length and athleticism had something to do with the 'clones shooting %. While I expect them to compensate and do better even in the Phog, I'm guessing it is still below average, and hoping the TO's for the 'Hawks drop as well.

Hopefully as KU keeps gaining confidence and improving set-play smoothness of execution, we are able to handle ISU at home. Our defense hopefully continues to improve. I hope Embiid's knee is truly improved! He had so much to do with bothering Georges Niang in the post. We have other bigs, but they arent like 7ft Embiid on the defensive end; Joel is a true game changer.

Agree with Erich. IMO, Georges is ISU's key player against us. We need Joel to shutdown Georges Niang 3-pt shooting. Joel is the only big with enough defensive floor range to stop Georges.

Benton/Matt, Since I brought up Joel... if for some reason he stays for 3 or all 4 years and keeps improving at his current pace, do you think people will stop comparing him to Hakeem and start comparing him to Wilt?

I think that's probably pretty irrelevant since it would take something miraculous to keep him here that long. But, for argument's sake, yeah, if he's here that long, he might be mentioned in the same breath as Wilt a time or two.

In this day and age, nobody of Embiid's talent level will stay that long in college, unfortunately. And even if he did stay that long, Olajuwon is still about as high as a compliment you can get as a center. I think even people who like to compare certain players to current/past greats have the sense to not try and compare players with the likes of Wilt or Bill Russell. I'd see comparisons to Tim Duncan, another amazing all-time talent, being the next name Embiid might get compared to as he develops. But that development will be in the NBA.