No one reading this blog has forgotten what happened the last time Oklahoma State played at Kansas.

The Cowboys prevailed, 85-80, and Marcus Smart performed a backflip after OSU won at Allen Fieldhouse for the first time since 1989.

Coach Travis Ford's Cowboys have won three straight games since falling, 74-71, at Kansas State, and the Jayhawks will be the fourth ranked team they've played this season. In the non-conference, OSU split two games with Memphis and beat Colorado.

Now it's time to meet the guys that make Oklahoma State explosive. 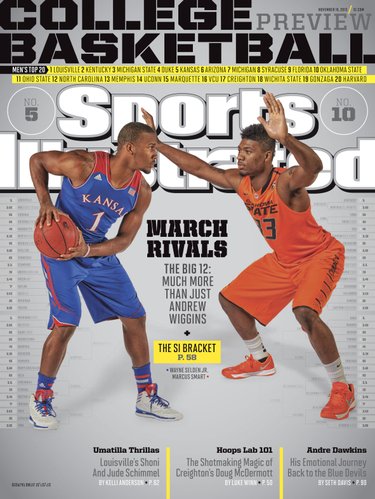 A unanimous Associated Press pre-season All-American, Smart averages 17.9 points, 5.5 rebounds and 4.2 assists, while shooting 46.3 percent from the field. And because he is stronger than most of the guards trying to check him, as well as some of the larger players who slide over to help, he gets to the foul line regularly. Smart has converted 87 of his 123 free throws — both team highs.

If you ever want a thorough scouting report video on an NBA prospect, look no farther than DraftExpress.com's YouTube channel.

There's a great one there on Smart (posted below). Ignore the stats, because the video was created in the off-season, but the highlights begin at the 1:50 mark and show off the beast of a point guard's wide array of skills, including a series of post-ups in which he shows better footwork than most big men in the country.

Or — if you prefer a (relatively) more condensed Smart highlight reel — watch him torch Memphis for a career high 39 points earlier this season.

Smart opened his barrage with a filthy spin move in transition, before offering up a step-back three, a post-up in the paint, a fast-break throw-down and a dunk via alley-oop, to name a few of his most impressive offensive plays.

Basically, Smart does everything the Cowboys need him to do, as you can read in a John Helsley piece for NewsOK.com, which came in the wake of Smart's 22-point, 13-rebound, five-assist night at West Virginia on Jan. 11:

The best way he can make the Cowboys better right now is by being the best player on the floor, which he's doing, with an added bonus of playing big, not just figuratively but literally. Against Texas, Smart posted a staggering stat line: 24 points, 11 rebounds, five assists, six steals and a blocked shot. And zero turnovers. At West Virginia, it was more of the same. Smart scored seven of OSU's final 15 points and either scored or assisted on his team's final four buckets.

Smart plays with the strength of a power forward, the mentality of a sniper and is built sturdier than a number of NBA point guards. 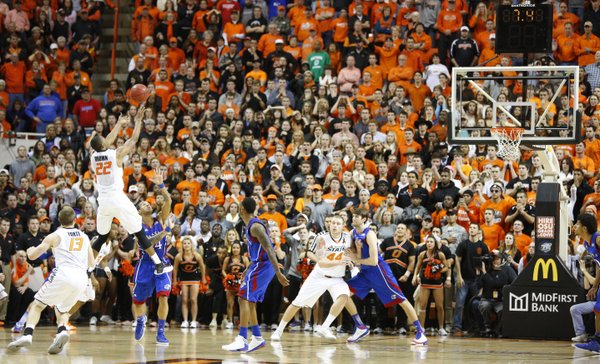 Oklahoma State guard Markel Brown goes up for a shot with seconds remaining in double overtime on Wednesday, Feb. 20, 2013 at Gallagher-Iba Arena in Stillwater, Oklahoma. The shot missed and the rebound went to the Jayhawks. by Nick Krug

Brown brings nearly as much offensive punch as Smart, adding 16.6 points, while pulling down 5.2 boards a game and dishing out 2.9 assists.

He's the Cowboys' third-best option from long range, as well. Brown drilled a three that held up as the game-winner when Oklahoma State's trip to West Virginia came down to the wire.

As if that weren't enough, the guy can sky. Known for putting on slam dunk shows, Brown compiled a list of his top 10 dunks for NewsOK.com.

His No. 1 favorite came a couple years ago against Missouri — remember those guys? — and Brown actually earned a technical on the play, his second of that game, which led to his ejection. Apparently it was too nasty to drop on the list, despite the repercussion.

Here's what the living myth of a dunk artist had to say about his vertical ferociousness:

“When I do one of those dunks, immediately I get tweets saying, ‘Markel's going to be on SportsCenter.' Things like that. I like doing those type of dunks. It's exciting. It gets the crowd pumped up. It gets my teammates some hype." 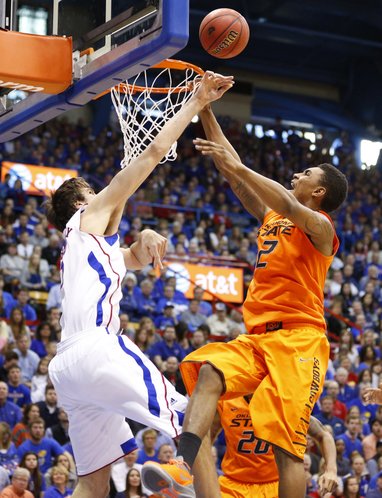 Kansas center Jeff Withey blocks a shot from Oklahoma State forward Le'Bryan Nash during the second half on Saturday, Feb. 2, 2013 at Allen Fieldhouse. by Nick Krug

Nash has the potential to play just as lethal a brand of basketball as Smart and Brown. But he still hasn't found that consistency that would make Oklahoma State even more trouble for its opponents.

Nash averages 13.5 points and 5.9 rebounds this season and has made 52.3 percent of his shots, but check out his scoring totals from his previous five games: nine vs. Robert Morris, 20 at Kansas State, 2 vs. Texas, 18 at West Virginia and 13 vs. TCU.

Like Smart and Brown, Nash is at his best when he's attacking, and he gets to the foul line, where he is a 70.5-percent shooter, averaging 5.6 freebie attempts a game. 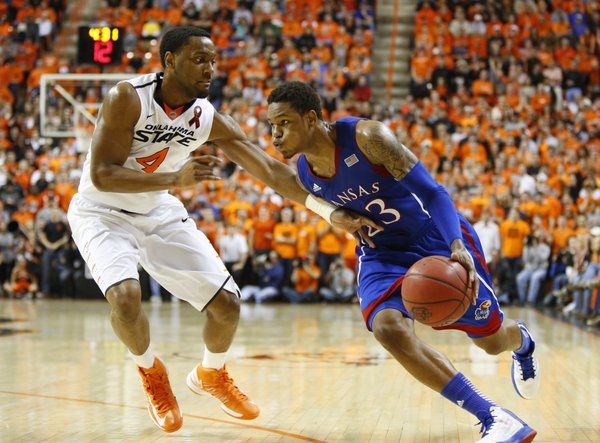 The most likely player to score outside of Oklahoma State's top four (the Cowboys' fourth-best offensive option comes off the bench, and we'll get to him in a moment). Williams averages 8.4 points and isn't great at any one thing, outside of scoring efficiently.

Williams has only hoisted 10 three-pointers, so much of his job duties come near or in the paint. He has made 52 of 93 shots and 36 of 47 free throws. 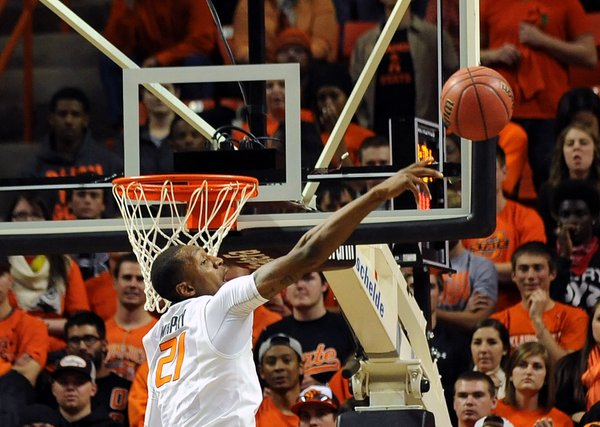 When he gets a touch in the paint, odds are the ball is going through the hoop. Murphy has made 60 percent of his field goals this season.

He has only started four games to date, but Murphy has made 39 of his 65 shot attempts, and averages 5.9 points and 5.9 rebounds (tied with Nash for the team lead).

The young big man gets a lot of those when the Cowboys have the ball, and Murphy leads OSU with 32 offensive boards this season.

If there is a situation late in the game in which Kansas needs to foul someone from OSU, Bill Self and his staff will target Murphy if he's on the floor. While a nice role player, his one problem area is the free-throw stripe, where he has missed more than he has made: 16-for-35 (45.7 percent).

His 23 blocked shots are a team best.

Kansas guard Naadir Tharpe puts a floater over Oklahoma State guard Phil Forte to give the Jayhawks the advantage with seconds remaining in double overtime on Wednesday, Feb. 20, 2013 at Gallagher-Iba Arena in Stillwater, Oklahoma. by Nick Krug

The deadeye shooter's 46 three-pointers and 47.9-percent accuracy from deep lead the Cowboys.

Forte hops off the bench and starts killing his opponents from deep, averaging 12.0 points and 2.7 made threes a game.

A lot of times this season, Clark has been the guy leading off an OSU highlight on SportsCenter. He's the one placing the ball perfectly near the rim for Brown or Smart to flush.

Clark averages 3.3 assists a game, with a 2.1 assist-to-turnover ratio.

Inside ... 7 foot Embiid , Ellis , Black and Traylor or would you take Murphy, Nash & Williams? KU will dominate paint .

guards and wings? Wiggins , Seldon , Tharpe and Mason or Smart , Brown , Forte & Clark ? could be a push , but think Wiggins will way out rebound Smart and get to the rim. And Seldon has shown he can be huge.

Bench , KU much stronger. if OSU has to go 8-9 deep they are done.. Smart gets in foul trouble ... they are in huge trouble.

With this many frosh we don't know how they will perform or react if they get down by double digits in the first half. Could get schooled for awhile. If JoJo can stay out of foul trouble while still protecting the rim and somebody goes off like Andrew, Perry or Wayne-o then we will see how OkieState reacts to being down. I hope it's, in your face, gut check for 40 minutes and an epic game to remember. Hope CBS steps up their game also.