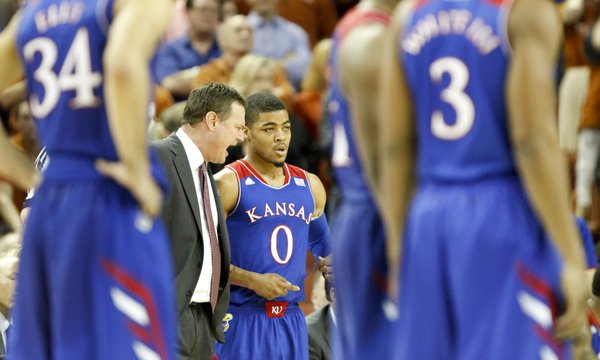 Kansas head coach Bill Self rips into point guard Frank Mason after Mason was issued a flagrant foul during the first half on Saturday, Feb. 1, 2014 at Erwin Center in Austin, Texas. by Nick Krug

With Saturday's home game against No. 19 Texas coming up, Kansas basketball coach Bill Self met with the media Thursday afternoon at Allen Fieldhouse to talk about the rematch with the Longhorns, who handled the No. 8 Jayhawks in Austin, Texas, on Feb. 1.

Here are the bullet-point highlights from the Q & A:

• On Texas freshman guard Isaiah Taylor: "I thought he totally controlled the game." Texas had KU on its heels the whole time. The Longhorns' transition offense was better than KU's defense, and the Jayhawks' ball-screen defense wasn't any good at all. KU did a bad job on the boards at Texas, too.

• UT bigs Cameron Ridley and Demarcus Holland gave KU problems. The Jayhawks usually win the battle of the boards in Big 12 play this season. But the one game they didn't "we obviously got whipped" on the glass. That was a big reason why Texas controlled the game.

• On clinching the Big 12 title in the weeks to come: We can't talk about anything past Saturday, because if KU doesn't win against Texas, it's down to a one-game lead, as opposed to a three-game lead. To him, this game isn't even about the league race as much as it is playing a Texas team that smacked the Jayhawks around already.

• February can be a tough time of the year, and part of it is playing teams a second time. Self watched a little of Syracuse's loss to Boston College on Wednesday night. Regardless of what people think, in 35 games or so of basketball, it's hard to be jacked up every game. Emotion plays a big part of your energy level.

When another team gives you your best shot and you're off a little bit, that negates a talent advantage that might be had. Playing a team the second time, it's harder to get easy baskets, players are better scouted. If two teams play the first time and it's a wide margin "I guarantee the second game is always gonna be much narrower." Teams raise their level the second time if they've been handled easily the first time. Top-five teams in the country are laboring to win, especially on the road. It's been that way every year. That's likely what happened with Syracuse.

• KU has been ranked as a top field-goal percentage defense team most of Self year's in Lawrence. This season, the Jayhawks are one of the top offensive field goal percentage teams. KU entered the week No. 1 in the nation in field goal percentage. (Currently, they're at 50.3%.) Self would rather Kansas be good at making it difficult for its opponents to score. No matter what a team's offense is like, there are going to be some nights where it is off, like at Texas Tech. You have to figure out a way to win those games when shots aren't falling.

A lot of times, guys have the sense that it is easy to out-score foes if shots are falling. Defense is a better formula for success over time. You're not always gonna make shots. "Defense always travels."

Self figured this team would be really good defensively and average on offense. It's kind of been the reverse. "And we're still not great, offensively."

KU might not be as bad defensively as he plays it up. In order for KU to be great, Jayhawks have to be great defensively. This team just has different pieces and personalities from teams in the past. Some personalities are more laid back than past intense guys on defense like Thomas Robinson or Travis Releford.

• Can players get tougher once they arrive at a college program? Coaches can improve on it, but you can't turn a guy into a junk yard dog. You can improve them on a scale — if they're a 5, they can go to an 8. There's room for improvement. It's also a team thing.

• Self would like to see KU's point guards "cut the head off" defensively. Past guards like Tyshawn Taylor, Sherron Collins, Russell Robinson and Mario Chalmers might have been taken for granted. Naadir Tharpe isn't as big as some of those guys, but he and Frank Mason can do a better job of forcing opponents to play poorly offensively.

Self isn't just picking on Tharpe and Mason, that's just kind of the way KU is playing.

• Joel Embiid seems to be fine. Self talked to him this morning. He assumes his back is fine. It's his back that would give him problems, if anything.

• Embiid is about to set the KU freshman blocks record. He's currently tied with Eric Chenowith at 62. He is good, but could be great. There is another step he has to take.

• Naadir Tharpe hasn't shot it great the past week. But he's been a consistent shooter this season and is a good passer, creates shots off penetration. KU needs him to be good for the Jayhawks to be great. Self is pleased with Tharpe, but he would like to see him and others guard the ball better.

• On the Kansas vs Texas series: There have been some really good players and games between the two programs since Self's arrival at Kansas. Hopefully this one will be a classic, too.

• If Kansas isn't good defensively, that's on Self. There's no excuse for not being good on that end.

"We're still not great, offensively"...(but leading the nation in FG%).

Does it seem like we are watching KU-RoyBall, with lots of scoring, and "less" defense? Man, I'd hate to be at KU practices these days, as Self is no doubt busy turning boyz to men...(SelfMethod of Toughness101: best left behind closed doors).