Getting reacquainted with TCU 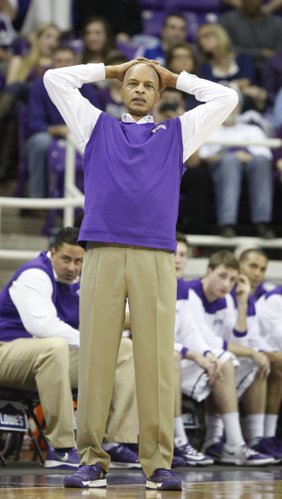 TCU head coach Trent Johnson watches in the final minutes against the Jayhawks on Saturday, Jan. 25, 2014 at Daniel-Meyer Coliseum in Fort Worth, Texas. by Nick Krug

Unfortunately for Trent Johnson, the above pose has been his go-to move this season.

That's what going winless in conference play will do to a coach.

Things won't get any easier for his TCU team (9-14 overall, 0-11 Big 12) today at Allen Fieldhouse, but they could be worse. The Horned Frogs could have to deal with Kansas starting freshman center Joel Embiid. But Jayhawks basketball coach Bill Self announced Friday the 7-foot phenom will miss the game, because he didn't practice on Friday and continues to recover from some nagging knee and back soreness.

That's good news for TCU, because Embiid went for 14 points, six rebounds and three blocks in just 19 minutes in a 91-69 Jayhawks blowout victory on Jan. 25 at Fort Worth, Texas.

Though the Horned Frogs have lost 11 straight games since closing their non-conference schedule on Dec. 29 by beating Texas Southern, three of their Big 12 losses have come by six points or less. Most recently in such a scenario, they gave Texas a scare on Feb. 4 before falling at home, 59-54.

Still, the fact of the matter is TCU just isn't that good, despite the presence of a few talented players. One major issue is depth. Johnson relies heavily on his starters, and they can only do so much.

The Frogs are in the bottom half of the Big 12 in almost every statistical category. They only rank among the top five teams in the league in free-throw percentage (third, 73.1%) and turnover margin (fourth, +1.26 a game).

Now, let's get reacquainted with the five TCU starters who will do all they can to pull off a mammoth upset at Allen Fieldhouse.

Anderson is seventh in the Big 12 in scoring at 16.3 points a game, but he's also fourth in a assists with 4.9, second in the league in free-throw percentage (behind only Oklahoma State's Phil Forte, who hits 92.5%) and averages 1.3 steals in 34.6 minutes.

He has eight 20-plus point game this season and became a 1,000-point career scorer at TCU with 27 points at Iowa State.

The junior forward has led the Frogs in scoring six times this season while only playing in 16 games.

Fields averages 13.6 points and 6.1 rebounds and is a threat from three-point range, too, making 18 of 50 from deep to date.

Fields' seven rebounds against Baylor made him the team leader in that category for the fifth straight game.

The freshman has scored double digits 13 times in his first season, with a season-high of 18 against West Virginia.

He is shooting nearly 40% from the field in conference play. 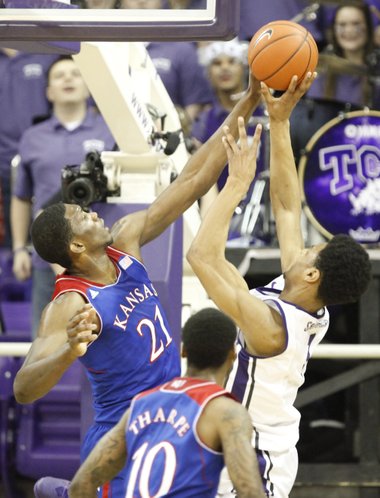 Kansas center Joel Embiid stuffs a shot by TCU center Karviar Shepherd during the first half on Saturday, Jan. 25, 2014 at Daniel-Meyer Coliseum in Fort Worth, Texas. by Nick Krug

The highest-rated player ever to wear the TCU uniform (No. 46 in the class of 2013 by Rivals.com), the big man has given the Horned Frogs a legit interior presence.

He didn't play that well in his first matchup with Kansas, and Embiid had something to do with that. If the Frogs stand a chance of sticking around with the Jayhawks in the rematch, they'll need a career day from the center whom KU once recruited.

Shepherd scored a career-high 15 points against Texas Tech and secured 11 rebounds, his best effort in Big 12 play, against Oklahoma. 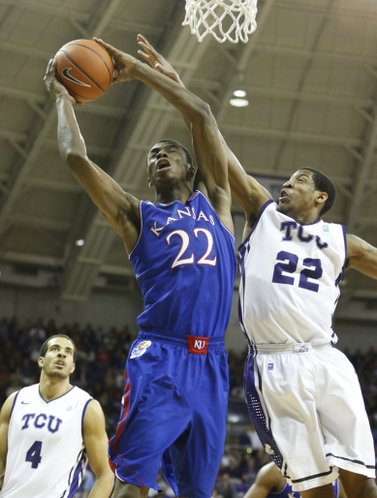 Kansas guard Andrew Wiggins gets a put-back bucket against TCU guard Jarvis Ray during the second half on Saturday, Jan. 25, 2014 at Daniel-Meyer Coliseum in Fort Worth, Texas. by Nick Krug

Ray has started every game for the Horned Frogs this season, and averages 8.5 points, 3.8 rebounds and 1.3 steals.

For a guard, he makes his presence felt on the glass, and has 28 offensive boards on the year.

He has only scored double digits in one Big 12 game this season: 11 on Jan. 11, vs. Baylor. In the eight games since, his best outing was against KU: eight points.