Getting to know the Hoyas 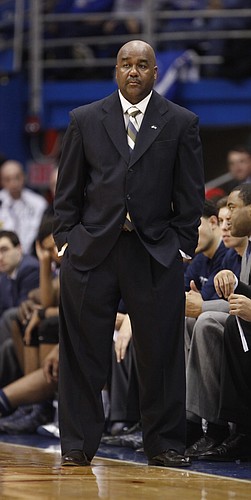 Georgetown’s November trip to the Bahamas for the Battle4Atlantis might have produced just one win for coach John Thompson III, but it should have his team prepared for the likes of No. 10-ranked Kansas.

The Hoyas (5-2) aren’t ranked by the AP, but that Thanksgiving week tournament, and the quality competition, helped them reach a current ranking of No. 20 from kenpom.com.

The college hoops analytical site has Kansas (6-1) ranked No. 9 — not too far off from Georgetown’s Atlantis foes, No. 16 Florida, No. 5 Wisconsin and No. 27 Butler.

Though the Hoyas lost by three to Wisconsin and by eight to Butler, they opened the holiday tourney with an overtime victory against Florida.

All of those games were played in the 60-point range, so don’t expect much up-and-down action in D.C., between the Hoyas and Jayhawks.

According to hoop-math.com, just 14.6% of shot attempts surrendered this season by Georgetown have come in transition — that’s the 10th-best percentage in the nation. Plus, as you might have noticed, Kansas doesn’t get out much in transition. Only 16.4% of the Jayhawks’ field-goal attempts have come in fast-break situations — that places them 309th in the country.

With that in mind, here are the Hoyas Bill Self’s Jayhawks will have to hold back in order to pick up a victory in their first true road game, at Verizon Center. 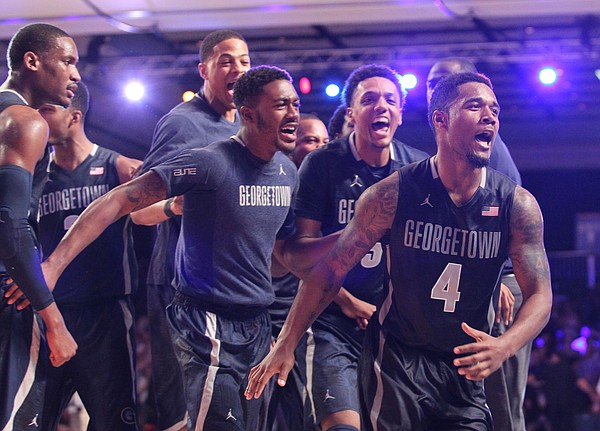 Georgetown's D'Vauntes Smith-Rivera (4), front, who scored the game-point, is surrounded by teammates as they celebrate their victory over Florida in the Battle 4 Atlantis basketball tournament in Paradise Island, Bahamas, Wednesday Nov. 26, 2014. (AP Photo/Tim Aylen)

The man whose crossover and clutch jumper from just inside the 3-point line gave the Hoyas an OT victory over Florida led Georgetown and the Big East in scoring last season.

He has taken a team-high 30 three-pointers, but has connected on just 10 of them, also a team-high.

— hoop-math.com nugget: Can be coaxed into settling for jump shots — 38% of his shot attempts are two-point jumpers and 42.3% are from behind the arc. 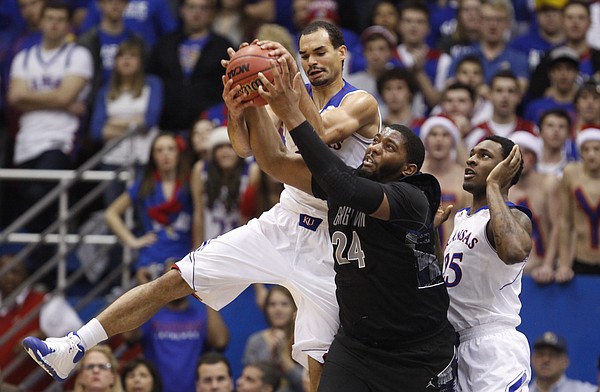 Kansas forward Perry Ellis competes for a rebound with Georgetown center Josh Smith and teammate Tarik Black during the first half on Saturday, Dec. 21, 2013 at Allen Fieldhouse. by Nick Krug

A 350-pound behemoth in the post, you’d expect a veteran of that size to be effective on his touches. You’d be right.

Smith has taken the second-most shot attempts for Georgetown (54, compared to 71 form Smith-Rivera) and he’s shooting 67% from the floor this season.

If KU defenders find themselves about to become another victim of the robust center, it might be best to foul him if possible. Smith’s 29 free-throw tries lead the Hoyas, but he makes just 59%.

Smith puts the big in big man and averages 12.7 points and 6.9 rebounds.

— hoop-math.com nugget: Smith leads the Hoyas with 14 put-backs, that’s where 26.5% of his made baskets at the rim come from. And he converts 75% of his second-chance looks from point-blank range.

Georgetown’s youngest starter is still finding his way after opening the season with 23 points against St. Francis Brooklyn.

Since then, Peak has totaled 37 points in his next six games (with 22 of those coming against Texas A&M Corpus Christi and Robert Morris), giving him an 8.6 points per game average for the year.

He scored eight against Florida, two against Wisconsin, none against Butler and five against Towson.

— hoop-math.com nugget: More times than not, Peak’s shot attempts come inside. Of his 47 attempts, 57.4% have come at the rim.

A role player opposite of Smith-Rivera in the backcourt, he averages 7.4 points and 3.4 rebounds for Georgetown.

Though he averages 25.1 minutes a game, the senior captain’s season-high for shot attempts was eight, in the Hoyas’ season opener.

Trawick has never made more than two three-pointers in a game for Georgetown. 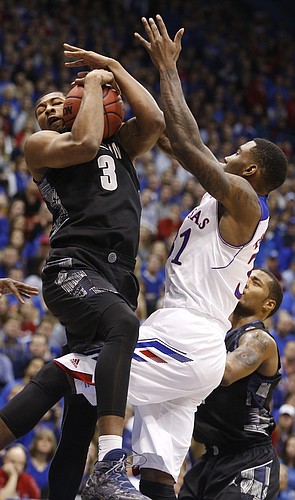 Georgetown forward Mikael Hopkins pulls a rebound from Kansas forward Jamari Traylor during the first half on Saturday, Dec. 21, 2013 at Allen Fieldhouse. by Nick Krug

More of a rebounder (6.9 a game) and enforcer in the paint (2.7 blocks) than a scorer (5.0 points), he still has great value for the Hoyas in the frontcourt.

He blocked four shots and scored eight points in Georgetown’s win over Florida.

He plays more off Georgetown’s bench (22.1 minutes) than anybody else.

White’s personal season-high of 13 points came in a loss to Butler, when he went 4-for-5.

In the last five minutes of games, he has gone 4-for-5 at the foul line.

— hoop-math.com nugget: KU might prefer that he try to attack in the paint because he only makes 28.6% of his shots at the rim. Don’t leave him open inside the arc, though — he has made 12 of 18 two-point jumpers.

We have got to rebound, and hit our shots. If we can get through this game and Utah we should be in great position to get to conference play with 1 loss.

It will be interesting to see who fouls out first, Landen or Cliff. Not fond of our under the basket defense so far this year.