Kansas University football coach Charlie Weis met with the media today to discuss the 2013 December signing class and a number of other topics.

Here are some quick hits from the coach's comments throughout.

Just as an introduction, here's a look at the three players Weis will talking up:

On to the press conference: 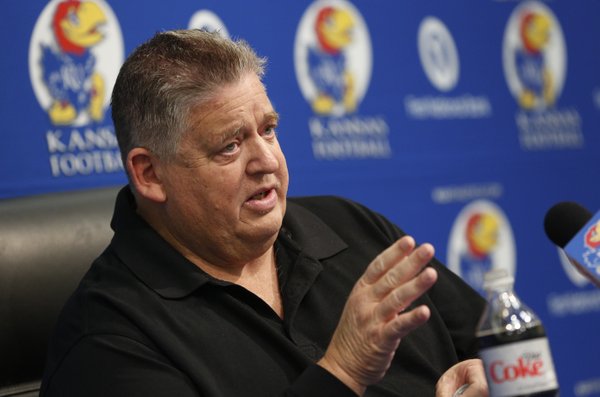 Ronnie Davis and Anthony Smithson are coming in to help the KU secondary. Smithson was a late addition and KU didn't know it would have a chance on him until late in the process. Staff watched a lot of tape on him as they realized there was interest and liked what they saw.

Both should help their secondary depth immediately.

Haughton started at LG, but he could play guard or center. They'll figure it out when he gets here and starts working.

When opponents are playing three or four wide receivers, KU needs more DB's on the field. That's why bringing in more secondary options was important, and Davis and Smithson should help on that front. KU needs to bring in even more depth.

Tim Grunhard leaving, Weis said, in part came with how hard it was to see a player KU was recruiting, Shawnee Mission West's Andre Maloney, die unexpectedly. Grunhard first started thinking and talking about stepping down at that point, because Grunhard wanted to spend more time with his family.

John Reagan first got approached by Weis about becoming offensive coordinator during Rice's season, and Weis is glad Reagan's team was able to keep rolling and have success before he left for KU. 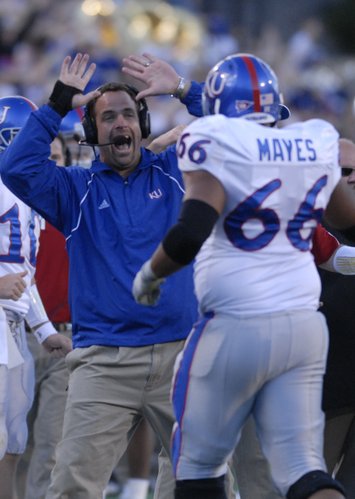 Weis wanted an O-line coach who could coordinate. Weis is confident with the KU staff and how the offense will work under Reagan. Weis is letting Reagan be in charge of the offense, lead meetings.

Reagan is respected in the Lawrence community and is highly regarded as an offensive mind. It made him an obvious choice and Weis found himself searching out Rice games on TV so he could watch the Rice offense this past season.

KU's offensive issues the past two seasons, since Weis's arrival, can not be narrowed down to one thing but the lack of production through the passing game has been concerning. There were various problems, including 47 dropped balls this season. Accuracy is another facet of the passing game, as are blocking and other intangibles.

When Weis is out recruiting, the message varies from player to player. There are some positions where he can tell a player he can come in and compete immediately, but he isn't going to lie to them. "That doesn't always work, but I'll always do it."

There are less holes on the roster now. It would be hard for a newcomer to get to campus and beat out KU's safeties, corners and linebackers. The problem is KU isn't there at every position. KU "not even close" to the same situation as last year, in terms of needs.

Darian Miller will be OK and will be a part of the program. Weis expects him to trot out there in the spring, just like everybody else. He just has some personal issues that Weis thinks will get worked out.

Smithson was headed to the Pac 12 and Utah, but he decided he wasn't interested in returning to the state where he played high school football, and Smithson's brother reached out to KU to inquire about the possibility of coming to Lawrence. The Jayhawks had a talented safety with range and it happened very quickly.

"I wasn't very happy with the offensive coordinator, so I made a change there." Weis joked he had to fire himself in order to make the program better. People might think he is dogmatic in his approach but he is always looking for a better way, and Reagan's offense gives KU a better chance to win.

Weis likes the efficiency of Reagan's offense. Especially with how it clicked when he was at KU, under former head coach Mark Mangino, and served as the run-game coordinator. The KU offense will have a staple, because Reagan is an O-line guy. That's his starting point. Weis's starting point was at QB. It should be a nice blend.

It will be interesting to watch the QB situation in the spring to see if Montell Cozart and T.J. Millweard (transfer from UCLA) have improved greatly. KU had depth at this position, and the starting/second-string/third-string assignments will work themselves out.

It's too early to talk about changes to the roster. A lot of times at mid-year things come up and players transfer. Weis is dealing with 105 different guys and each situation is different. He is sure there will be some changes. Any changes to the staff, if they were to happen, wouldn't come until the end of the recruiting season.

By February, the recruiting class should be in the 20s. By the summer time it will be full. The Jayhawks should max out at 26.

KU staff will have its spring game, evaluate for a week and then hit the junior colleges. Coaches like to get out to JUCOs before they have their spring games.

One of the Big 12's marquee programs, Texas, has a coaching vacancy. Weis thinks there are issues with going to a high profile job like that. "Who do you answer to?" ... "I think that would scare a lot of people off." The dollars will be big, but that only goes so far. "You could be miserable, too."

Weis met with seniors who are moving on this past Friday and gives them advice as needed about playing at the next level. He'll talk to everyone generically but if they ask him specifically about their chances at playing in the NFL he gives them a truthful opinion but doesn't discourage them from chasing their dreams.

It's easier to evaluate whether a Big 12 player can move on to the NFL than if a high school kid can thrive in the Big 12. Sometimes kids get on campus and they just don't have what it takes.

When you add a player like receiver Nick Harwell, it rises everyone's game up. Harwell transferred to KU from Miami (Ohio) and became a leader at practices since arriving in Lawrence. Behind him, the position battle is open. The outside guy opposite him could be a JUCO recruit or someone already with the program who steps his level of play up.

As far as transfers from other Division I programs, there are players interested in Kansas and the program is interested in them, too. Nothing Weis can say about it on the record at this point.

"Weis likes the efficiency of Reagan's offense. Especially with how it clicked when he was at KU, under former head coach Mark Mangino."

I could be wrong...but wasn't it Ed Warriner that ran Mangino's offense ? Thought Reagan was just an O-line coach.

Sorry about the vagueness of that. I was trying to keep up and posting things as quickly as I could. Reagan was the run-game coordinator at Kansas. I'll clarity that in the post. Thanks!

Coach Weis- I don't know if you read these posts but here's to you and your family having a wonderful Christmas. Thanks for the adjustments, the hard work, and the humble approach you've taken in an effort to make KU football successful.

Is it accurate to say Reagan's offense is the spread? I have read that many times since the announcement of his hire. Warriner was the head OC and the brains behind our spread in 2007-2009, so not sure we truly know what to expect with Reagan running the show.

True Warriner was the one running the Offense those years, but look at the production they got out of backs like Cornish and Sharp? Knowing when to run in a spread offense. Right now, I feel encouraged, BUT the only thing that gives me doubt is finding some wide receivers who can catch a dang ball! You listed 47 drop passes this year. Just think what our record would have been if we could have reduced that number by half?

Passing game WILL be a lot better by adding Harwell. Nation-leading stats as a Div.1 college player at Miami-(OH), prior to his transfer. We are lucky to have got him, and just like with Selby, the NCAA flicked us by deeming him ineligible. If we had Harwell on one side, and Pierson on the other, along with our RBs, the pressure is lifted off any 1 guy, as we can spread it around alot better.

Maybe Rodriguez Coleman or Josh Ford become the #3 and #4 WR options. But make NO mistake: #1 WR is Nick Harwell (you'll love him!), and #2 WR is Pierson (who we already love, but cannot risk his health by overusing him).

QBs set to battle, which is as it should be.

O-line should really blossom this year. Adding 2 NatlChampJuco guys off the same line could bring instant skill+chemistry. Definitely adds depth. And there were 5-6 frosh and redshirts in-system and in-training/conditioning that we never saw play a snap...so Reagan should have a whole platoon of trench warriors to battle-test.

Harwell should be a nice addition, but Ford is a Sr, so won't be around next year.

It will be good to get Miller back, and he's not likely to be 3rd string. Will be interesting to see how much Wrench can contribute right away.

Not sure I'd classify OL as set, not after losing 60% of the starters for the 2nd year in a row. Hopefully, some of the reserves will continue to develop into productive players, but none have proved they can to date. It would be nice to get one of the top 50 JC OT's that are looking at us, and even better Braden Smith.

Lots more recruiting to do.