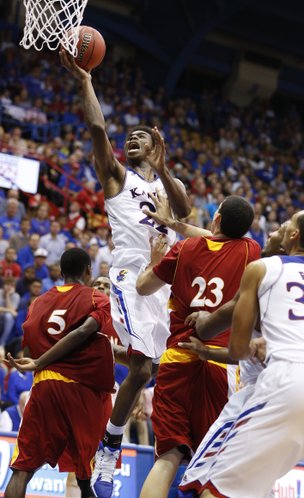 No surprises. Maybe its good to get this out of the way soon. And good for Wiggins. This should make him stay aggressive, as its all about showing the scouts what they want to see. Hope Wiggins has a great season for us.

I've had people bring that reference occasionally over the years--I am well aware there was a German pilot with the same name as me.... I sort of tongue-in-cheek go with it now, as you see me borrowing a photo from the WW2 movie "Red Tails"...But in reality, you will see many people with the "Hartmann" name in the KC and Wichita areas, but we are not all related. But some of us are indeed KU graduates! RCJH.

Wiggins doesn't need two seasons in college, but he definitely needs one. NBA teams are a whole lot better than Pitt State. Wiggins was not exceptional in that game, especially considering the level of competition. This is not a knock on Wiggins at all; just a recognition that he will grow and become more comfortable as the season goes on. Sometime between now and March he will fill his billing.

I think kids need at least a year of college to develop their game, get stronger and just hone their overall skills. It will be a treat to have him this year.

That whole "redacted" this and that part of the article sure was weird... I mean, obviously they're talking about Wiggins, so why redact his name?

Also, Perry must be driving pretty fast to get Andrew to Wichita in an hour and thirty minutes... SLOW DOWN PERRY!!! ;)

Just curious if the captioned photo above catches the Pitt State defender in the act of a foul. I hate to mention this here because it is not relevant to the article, but I wonder if it will hurt the leagues who generally play a more physical brand of basketball more so than the Big 12. I'm thinking you really put a vice on the Big 10 and Big East teams.

He needs two years, maybe even three before he's ready for the NBA. And before anyone freaks out, this is what we call sarcasm.

I think there were over 40+ fouls at the Pitt game. Muddy basketball.

I don't think you make a statement like that and put yourself out there where you have to go. What if he doesn't play to his ceiling this year? What if he's a Selby? I'm not judging him just saying that if he and Self decide at the end of the year he's not ready I hope he is able to see that and not jump too soon. 99% chance he's ready but if he needs more polish to play then he shouldn't leave. Again, I think he'll be ready and I'm only giving him a 1% chance of not being ready so pretty likely he's legit and will leave as the #1 pick.

Those of us in Kansas, Kentucky, Indiana, North Carolina and many other college basketball crazed locales would probably like the emphasis placed on the upcoming season not the "NBA auditions!"