A few links to start off your Tuesday ... 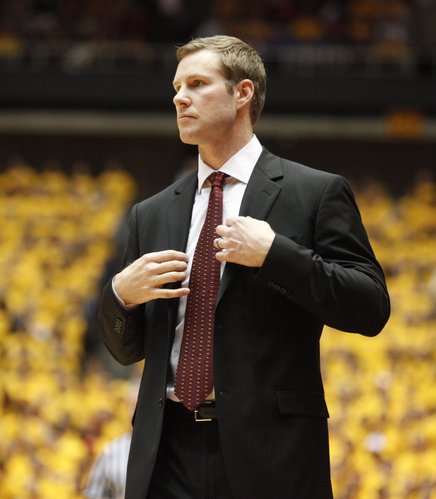 Iowa State head coach Fred Hoiberg watches after a Jayhawk bucket during the first half on Wednesday, Jan. 12, 2011 at Hilton Coliseum in Ames, Iowa. by Nick Krug

"Last year, the ability to play different (with forward Royce White playing the point) was the reason we hung in there and had a shot," Hoiberg said. "You have to think outside the box when you play Kansas."

After watching Hoiberg's 10-minute, 34-second press conference, here are a few more notes and quotes from him.

• Hoiberg labeled KU as "scary good," saying the Jayhawks excel at making other teams uncomfortable offensively. "Their defense is phenomenal," he said. Hoiberg indicated the single most important thing for Iowa State would be taking care of the ball, noting that worked well out for Temple, which hung around with KU before eventually falling, 69-62, on Sunday.

• Hoiberg on scouting KU's defense: "I didn't sleep much after watching the Colorado game. ... It was like there were eight guys out there on the court." Something to keep in mind: ISU has had a lot of time to prepare for this game, as the Cyclones have only played one game after Dec. 19. That will make Wednesday's game only ISU's second in 21 days.

• ISU has been simulating crowd noise in practice to prepare for Allen Fieldhouse. Hoiberg even mentioned the team working on its hand signals.

• A couple times, including the quote above, Hoiberg talked about having to "play different" to beat KU. I'd have to guess the coach is focusing his offensive gameplan on trying to get Withey away from the basket defensively.

• An Ohio State-Kansas pregame video gathered a bit of buzz from those of us who saw it live last month, as KU coach Bill Self's head was placed on the Wicked Witch of the West's body during a Wizard of Oz clip.

After some digging, I found the pregame video on YouTube for those wondering about it. Skip ahead to the 1:42 mark to get through KU's introductions.

• Gary Bedore mentioned this in his Jeff Withey story today, but ESPN.com's Eamonn Brennan had a nice write-up about Withey's "crazy" defensive season.

• And finally, in his college basketball conference previews, Scout.com's Ken Davis says, as of early January, KU coach Bill Self is national coach of the year.

REALLY?Wizard of Oz? Is that is all OSU has? Definitely lowered my opinion of this higher institution of learning..

Makes,you appreciate another aspect of what we are blessed with at KU. That video was lame! The intro videos at KU are so much better. All of the history shown in our videos and not to mention Mario's Miracle! No matter how many times I watch it, it still makes my heart go wild!

The writers and analysts for ESPN always mention KU for having the best intro video.

Talk about originality. That's probably the first time that anyone's ever made a Wizard of Oz reference in regards to a Kansas sports team.

I feel your pain !

But, I sometimes feel that if it weren't for that movie, 90% of the United States wouldn't even know that Kansas was a state. It does give us some widespread recognition.....

I kind of liked the Oz video, but then I'm easily entertained.

I agree Carolinajay! We may have more fabulous intro's, yes. But I found their little clip comical and flattering. They're scared! haha They should be! Bottom line, it's all in fun. No need to get bent out of shape about it.

I also liked the video. As a Kansan who no longer lives there, I do get tired of Wizard of Oz references (and my Mom's first name really is Dorothy who grew up on a farm in Kansas), but I like they fact that OSU went to the effort to personalize the video.

Really glad we took it to them in columbus. Makes you forget how great we have it, although I feel like the atmosphere for all the college games is turning into an NBA feel (all entertainment), KU still has more tradition than any other school out there.

Im not happy with the announcer at the games getting on the loud speaker to tell everyone who just scored, feels too much like an NBA game to me.

When has the PA announcer NOT said who scored the points?

Did anyone else see the video montages throughout the game on Sunday. The intro video is always amazing, but the personal player clips that played during the game were awesome! Kudos to whoever made those.

That hurt to watch. No wonder they can't get up for a big game.

What's even worse, is that somebody took the time and SD memory to video that, and then YouTube it!! I think they may have just set Ohio State's recruiting back 10 years.

wtf is a buckeye

A tree, which is what they should replace that intro with.

Or maybe a nut from that tree.

Can you imagine if KU did this? I'm not sure I could survive a stretch like that during the season.