A few links to start off your Monday ...

• After both Duke and Michigan fell last week, ESPN writers made their arguments for who should be No. 1 this week.

Of all the one-loss teams who are in the discussion -- Duke, Indiana, Louisville, Arizona, Michigan, Syracuse, Gonzaga and Creighton -- the Jayhawks shouldn't take a backseat to any of them.

Other candidates for the top spot in the article included Louisville, Indiana and Duke.

• On Saturday, former KU guard Mario Chalmers knocked down 10 three-pointers in a victory over the Sacramento Kings, tying the franchise record set by Brian Shaw in 1993.

The 10 threes also is the most made by a player in the NBA this season.

It's interesting to watch both LeBron James' and Dwyane Wade's reaction to Chalmers' performance. Though Chalmers has often gotten the "little brother" label in Miami, the Heat's two biggest stars seemed to be genuinely happy for him Saturday.

• If you haven't heard it yet, Bob Davis' radio call of Ben McLemore's game-tying three against Iowa State is definitely worth a listen.

• ESPN.com's Jason King has more on Jamari Traylor's back story, which includes sleeping in an abandoned Buick on the south side of Chicago after he was kicked out of his house during high school. A couple weeks ago, CJonline.com's Austin Meek also wrote a feature story on Traylor's struggles.

• A final look at some highlights from KU's 60-46 victory over Texas Tech, from KU Athletics.

• Here's another insightful blog from C.J. Moore, who shows how opponents sagging defensively off Kevin Young is hurting the Jayhawks' ability to get the ball to Jeff Withey. 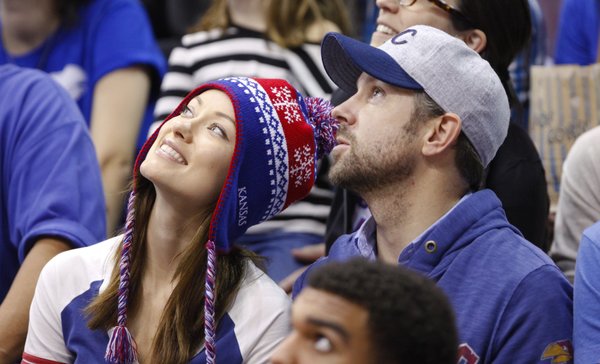 Actor Jason Sudeikis and actress Olivia Wilde watch the video board during the second half on Saturday, Dec. 29, 2012 at Allen Fieldhouse. by Nick Krug

As you probably remember, the two sat behind the bench for KU's 89-57 victory over American late last month.

• Bleacher Report's Adam Fromal says NBA general managers "would be foolish not to at least consider McLemore at No. 1."

• I saw this posted on another site, and it was too interesting to not share.

The video below is of a KU-Missouri men's basketball brawl from 1961. I guess not much has changed in 50 years.

• With KU taking on Baylor at Allen Fieldhouse on Monday night, here's a quick look back at the biggest highlight from last year's KU-BU game in Lawrence.

• And finally, this isn't sports-related, but LJWorld.com's Chad Lawhorn wrote a tremendous piece over the weekend on an abandoned baby, a dime and a Lawrence laundromat.

Kinda curious whether Katz actually believes what he wrote, or if that was simply the straw he drew for the article.

Katz believes at least he did a week ago Saturday during halftime of the Okie State/K-State game when he said Louisville and Kansas would play in the National Championsip game. But, that was "At That Time" of his prediction.

Love the "Seen it?" blogs. Doesn't help me get work done on a Monday morning, but it is game day after all.

Agree fully with both sentiments here.

Jesse, keep going with these posts; they are fantastic!

Can we be friends again LAJayhawk?

The radio call gave me chills. Gurley didn't even screw it up!

Question - does anybody listen to games on the radio anymore? Or even an internet feed of the radio call? Seriously - I'd like to know if you do. (But I don't count listening to the radio WHILE you're watching the TV) Almost every game is on TV or can be watched/followed in some manner on the Internet. I suppose people listen in their cars if they're driving. Armed forces overseas maybe? So do YOU ever only listen to the radio feed of games? - I think it would be interesting to hear the reason(s) if you do.

The reason I asked the question is that I used to have to listen to KU football and basketball games on a tiny, staticky, transistor radio on an AM station. I learned to listen to the background crowd noises as much as the announcers to determine if something good happened - or didn't. Listening to the crowd reaction to McLemore's shot reminded me of those days.

Many of us out-of-staters probably view most of the non-televised games on espn3 now, but often the espn3 feed doesn't work on my computer. Also, I don't know if the exhibition games against Pitt State, Emporia, Hays, and Washburn air online on espn 3.

I haven't listened to a web-streamed radio feed of a KU game for a couple years now, but the above scenario would probably be my single reason for that.

My mother-in-law is 95 and cant see well, so she listens to the games on the radio. We just bought her a new radio last week because the one she was using didn't work well.

I hope a links column like this can be a regular part of the KUSports page. Thanks!

By the way, the radio call of BMac's shot left me wondering if there something similar to Mario's shot against Memphis. I've got the CBS DVD of it, but looking for the KU radio feed.

Thanks PSM, chills up and down my spine!

Jason King is the man. "Beyond the Phog" is an awesome book and he's always giving KU love at ESPN.com

"Beyond the Phog" is an awesome book

My bad Jesse! We all know you're the man. Jason and Sherron signed my book, guess I better get your autograph on there too.

Ha. Just giving you a hard time. Definitely agree with you about Jason.

Man, there is nobody at Texas Tech.

I'm disappointed that wasn't filled by Jayhawk fans. Come on Texas Jayhawks!! If that was in Boulder, you know what would have happened.

Do you know how far Lubbock is from ANYWHERE?

We still had enough fans to have a very loud and clear rock chalk chant at the end of the game.

Sorry PikesPeakSmitty. That's about a 6 hour drive. 12 hour round trip PLUS food/rest station breaks from Dallas/FW....I'm a DIE-HARD Jayhawks fan, but maybe you haven't been out to West Texas lately? ;)

Is there an online source or anywhere to purchase the 2008 title game? I sure would like to get my hands on that, as well as the UNC game.

http://vault.ncaa.com/ This site has over 30 big KU games throughout the years, including most of the Final Fours/Title games we were in dating all the way back to '86.

I've used that site too. I wish they'd update it to last season though.

You just totally made my day. Thank you!

"If he don't get better"

Click on his name and read his comments, what he wrote is par for the course.

Really, KUsports??? You removed my comment??? I made a reference to "baboons using the internet." Is the site staff sensitive about primates?

And how did easyfive's comment get removed?? It was dumb, but not offensive in any way.

Though incredibly stupid; I don't believe Easy's post violated any of the usage agreements.

It looks like Wade and James are telling the coach to keep Chalmers in and he's like, "no way that happens." Chalmers was pulled shortly after No. 10.

A nice thought from Andy... but KU should not be #1; and I don't want them in that place yet anyway.

Bob Davis is a freakin' radio artist! He has given me the chills listening to KU football and basketball games more times than I can remember. I'll never forget his call of KU upsetting OU in football at home with LT Levine breaking four or five tackles down by the goal line.

That Missery clip is fantastic! Made my day!

I has seen the MU brawl clip on You Tube before. I think the announcer was Jack Buck.

Am I the only one who thinks it's hilarious that the solution to stopping a brawl in the 1960s was to have the band play the national anthem? It just goes to show how much times have changed if, 50 years ago, playing the national anthem could reasonably be expected to jolt the violent masses out of their bloodlust.

Regarding Chalmers' 10 three-pointers, I have to admit that I'm not surprised, and I got the impression that neither Lebron nor Wade were either. We Kansas fans certainly know Chalmers ability to take/make big shots, as well as his ability to simply take over a game for a short period of time (the 2008 Big 12 Tournament comes to mind), and I imagine, practicing with him every day, Lebron and Wade see it too. Chalmers has always had that alpha-dog mentality that you see in guys like Wade and Lebron, but just hasn't quite got the full-on, unstoppable basketball talent to go with it. Not saying Mario can't ball, just that there are a lot of components to being the type of superstar that Lebron, Durant, Kobe, etc... all are, and one of those components goes beyond being able to dominate a game (a skill Chalmers clearly possesses) and into being able to dominate consistently, at any time you want.

I don't really like what they (Wade, Lebron, Bosh) put together in Miami, but my consolation prize is that it certainly seems to have benefited Chalmers. I think the alpha-dogs in Miami really appreciate what he brings to the table as a basketball player, even if he's not a pure possession-by-possession point guard at the NBA level.

No comments about Jason Sedekus punching way above his weight class with Olivia W? I guess if that fat guy from K-State can date Charlieze Theron anything is possible.

It's his KU fanhood. Adds 2 levels of "weight class".

Really loved reading Jamari's story. It's very hard for most of us to really understand what life is like for many of the players who suit up in a Kansas uniform. It sure seems like he has come a LONG way from where he was at 16 to where he is now. Makes me very proud to have him at KU and see his continued growth. I don't know much about him except what I read here, but he seems to have become quite responsible with his course work since he has to sit out last year. I expect that he will be a great before he leaves KU

Also goes to show what a massive failure the so-called "War on Drugs" has been. Life in prison for a non-violent lawbreaker, all because he made the (admittedly stupid) mistake of continuing to sell drugs, in spite of the whole "three strikes" policy after having been in trouble for drug charges before.

Chalmers has beautiful form on his jumper. Reminds me BMac and AWIII :)

Love this column, Jesse. Keep up the great work!