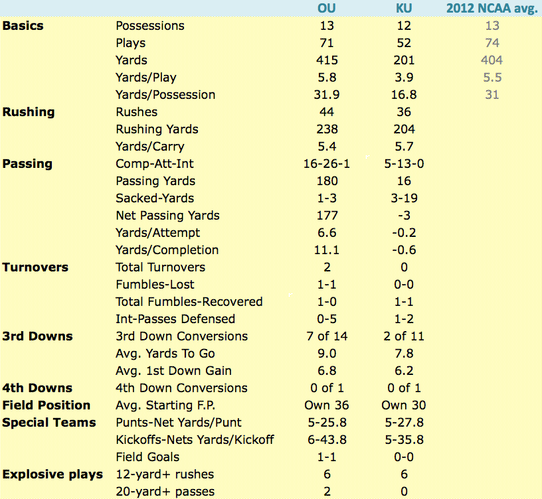 • About that passing offense ...

I mentioned this on Twitter, but KU's passing offense might have been even worse than you originally thought on Saturday.

KU had 16 passing yards but also lost 19 yards on three sacks. In our "new" box score, sacks count against passing totals, as the team technically was trying to pass.

In essence, on plays when the Jayhawks tried to throw the ball against OU on Saturday, they went backwards. And that was against an OU defense that continued to bring defenders closer to the line to stuff the run. 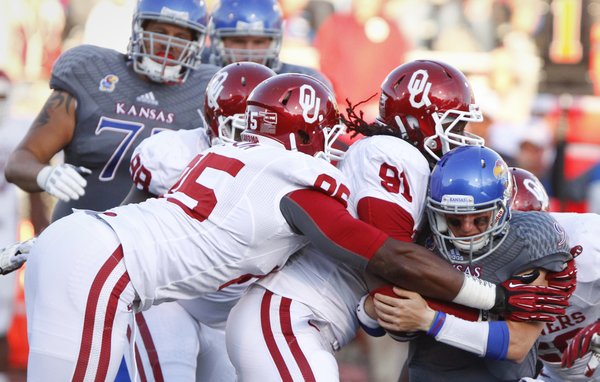 Kansas quarterback Jake Heaps is sacked by Oklahoma defenders Charles Tapper (91) and Geneo Grissom on the Jayhawks' last drive of the game, Saturday, Oct. 19, 2013 at Memorial Stadium. by Nick Krug

It's not all on KU quarterback Jake Heaps, and to be fair, he didn't have many opportunities to throw Saturday. But as the bad passing performances pile up, KU coach Charlie Weis has to at least consider shaking up the position because of its lack of production.

As bad as it was, KU's offense was better

Throw for negative-3 passing yards, and get better? Yep, that's the point KU's offense is at now.

Believe it or not, KU put up its best performance in Big 12 play against the Sooners. Take a look:

KU's 3.9 yards per play and 16.8 yards per possession are still not good, but they're better than what the Jayhawks put up in the previous two weeks.

The reason it doesn't look as good is because of context. KU (wisely) huddled on every play to slow down the pace of the game, and looking at the box score, it's one of the main reasons this game was close.

Give Weis credit for using this underdog tactic well (though he still needs a lot of work on fourth-down decisions). The Jayhawks will need to continue to shorten games against the Big 12's top teams to have a chance.

This game isn't like last week against TCU where nearly all the blame goes on the offense. KU's defense had its worst game in a few weeks. 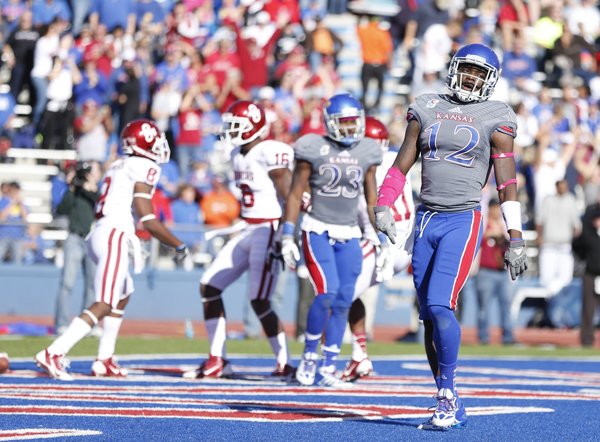 Kansas cornerback Dexter McDonald turns back to the bench after giving up a touchdown to Oklahoma receiver Jaz Reynolds during the second quarter on Saturday, Oct. 19, 2013 at Memorial Stadium. by Nick Krug

KU allowed higher-than-NCAA-average totals in both yards per play (5.8) and yards per possession (31.9). The yards-per-possession number might have even looked worse if not for an OU game-clinching drive in the fourth quarter that gained a first down but netted just eight yards before a kneeldown.

On a windy day that should have hampered OU quarterback Blake Bell, KU's secondary wasn't its normal self. The Jayhawks had just two passes defensed (they average 6.7 per game) and also were burned repeatedly on third downs. Though OU averaged 6.8 yards to go on third downs, it converted seven of those 14 tries; the Jayhawks allowed third-down passing conversions on a third-and-12 (16 yards), third-and-6 (11 yards) and another third-and-6 (10 yards).

Though KU racked up the tackles-for-loss (nine), it overall didn't defend the run well, either. OU averaged a healthy 5.4 yards per rush and also had six 12-plus-yard runs on 44 carries.

Honestly, it's tough from the box score above to see why this game was as close at it was.

The Jayhawks had one interception while defending just two passes, which is a bit fortunate. Remember, about 21 percent of passes defended end up as interceptions.

On the flip side, OU's defense had five passes defended but no interceptions. Had one of those passes stuck, we're most likely talking about a blowout instead of a close game in the fourth quarter.

It's minor, but KU also recovered the only fumble of the game, which helped its cause as well.

The KU punter, who earned mid-season All-America recognition from Phil Steele earlier in the week, had by far his worst day while dealing with a steady wind and a flood of OU pressure.

OU's punting wasn't any better (five punts, 25.8 yards), but on a day when OU clearly won the field-position battle (starting at its own 36 compared to KU starting at its own 30), the Jayhawks could have made up a lot of ground with an average game from Pardula. They didn't get it.

Can O-line keep it up? 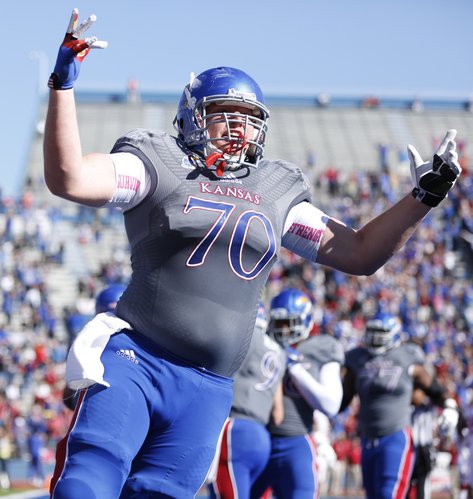 Kansas offensive lineman Gavin Howard raises up the crowd after tight end Jimmay Mundine's touchdown against Oklahoma during the first quarter on Saturday, Oct. 19, 2013 at Memorial Stadium. by Nick Krug

The Jayhawks, who had no 12-plus-yard rushes last week against TCU and just two in Big 12 play coming in, had four in the first quarter and six overall against Oklahoma.

It was the most positive aspect of KU's game Saturday: The Jayhawks' offensive line showed flashes of knocking defenders off the ball after struggling with that virtually the entire season.

It'll sure help, though, if the Jayhawks can go forward — and not backwards — with their passing game.

Gaping holes in the defensive line on those OU run plays. Bell also had a ton of time to throw...with little pressure. The lack of performance on the D-line doesn't surprise me at all.

What is surprising...is that our secondary got exposed.

McDonald got burned badly on that TD pass to Shepherd.

I'm not sure why the announcers give all the credit to Clint Bowen for the improvements on defense. Did anyone see our special teams last year...and our defense Mangino's final season when Bowen was coordinator ?

The bright spot in our defense has clearly been the secondary...and Ben Heeny. Campo is our secondary specialist.

I know I am watching TV and can see the yellow first down line, but why do our backs play 15 yards off the WRs when it is 3rd and 6? Can they not figure out where the first down is? It seems like we are in a modified "prevent" D. I am not a Xs and Os guy, but I understand how a hard thrown ball to an open WR can get 6 yards all day long.

Not having Ben Heeney played a huge role in KU not being able to stop the runs up the middle. Love and Willis are decent LB's, but neither are close to Heeney in skill or instincts.

Also keep in mind that OU is an above average offense and KU held them to pretty close to average numbers. If KU had any kind of reliable offense, this would be a top 3 defense in the Big 12. The biggest concern is will the defense as a whole have the endurance to keep up how they're playing now or will they fade like they did last year and get routed because the lack of depth and inability of the offense to stay on the field catches up to them.

I'll say this. In the first half the defense played much better than I thought they would. Of course the offense was more effective in the first half so maybe that had something to do with it. The second half woes may have been a result of being on the field too long, which was assured by the miscues of the passing game and inability to get first downs. And for once this cant be blamed on the line. It seems, then, that Jake Heaps' passing inefficiency has a direct result on our ability to defend. A little leaven leaveneth the whole lump, as it were.