ESPN.com college basketball reporter Jason King (@JasonKingESPN on Twitter) took some time to talk about the Kansas men's basketball team signing No. 1 prospect Andrew Wiggins and what it means for the Jayhawks in 2013-14.

Q: What's your first reaction to Wiggins committing to KU? 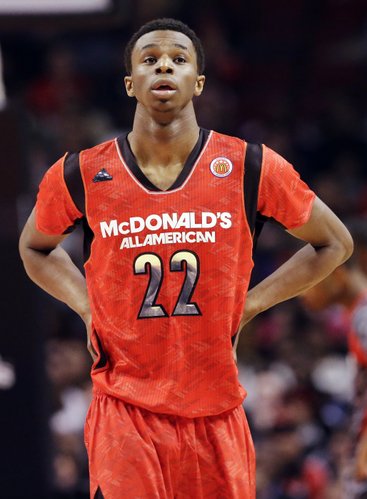 A: I'm actually somewhat surprised. I thought that he'd go to Kentucky, just because they've had such a track record of landing these one-and-done-type of guys, and (KU coach Bill) Self has struggled, for the most part, to get these type of players. At the same time, living here in Kansas City, I'm selfishly excited because I'll get to see a lot of a player who some say is one of the best high school players ever — or best college prospects ever.

I think also my reaction is kind of refreshing to see this kid wants to try something different than the Kentucky way. It's good to see he did put this kind of trust in Bill Self, because Bill Self develops players as well as anyone. Someone made this kid realize that. I think this makes Kansas probably a contender for the national title.

Q: You had KU No. 21 on your last top 25 preseason ranking. Where do you think this moves them now?

A: With him picking Kansas, I've moved them up to No. 5, just because I do think the players around him will develop. The reason I had Kansas ranked No. 21 was just because I thought it would really take a while for them to jell and for those young guys to adapt to the college level. I think it will happen, but I think it will happen in January or early February, not in November or December. Their schedule is so tough, I just worry about them struggling earlier. But now, a player of this caliber, I think he'll probably make everyone around him better. He'll get his points. ... Kansas is going to be right there on the cusp of a top-five team with a chance to be a top-five team when it matters most.

Q: How do you think Wiggins fits in on KU's roster with some of the other newcomers coming in?

A: I think they need something at every position. They're going to need someone to step up at every position. There are a lot of question marks out there about Kansas, just because, again, it's all about how quickly these guys will adapt, and he's probably going to adapt more quickly than anyone, because he's probably more talented than anyone on the roster. I think he'll be a guy that probably carries the team through some tough times and tough games early. As far as where he'll play, I think you've got to find a way to get him and Wayne Selden on the court at the same time. Selden can play the 2, and I think Bill Self, he's going to find a way to get his best players on the court at the same time, and both of those guys, I would think, are among his top-five players. They'll make it work. I still think the point-guard position is a concern, but by signing Wiggins, that's going to alleviate a lot of problems, even though he's not a point guard. That's going to make them that much better at other positions.

I think another key is how quickly Joel Embiid develops and how much better Perry Ellis can get. Both of those are really talented guys. All of a sudden, this is a loaded team, I think.

Q: Does this, in your eyes, make KU the favorite for the Big 12 next year ahead of Oklahoma State?

A: I believe it does, in my opinion, because talent-wise, they're just as good. They're bigger down low than Oklahoma State, which doesn't have much size. Then I think the X-factor is Bill Self. I think when the teams and the talent are even and things like that, then you look toward the bench, and I think they have the best coach, not just in the Big 12, but in the country. I think the team that wins the Big 12 is the one that is the most consistent and the one that can win on the road. I think all that revolves around coaching, and I think he's the best. I think now they have comparable talent to Oklahoma State, probably better talent overall, even though it's just not as experienced. But yeah, I do think they're the favorite.

Q: You mentioned Self. How does getting a player of this caliber affect his reputation in college basketball? 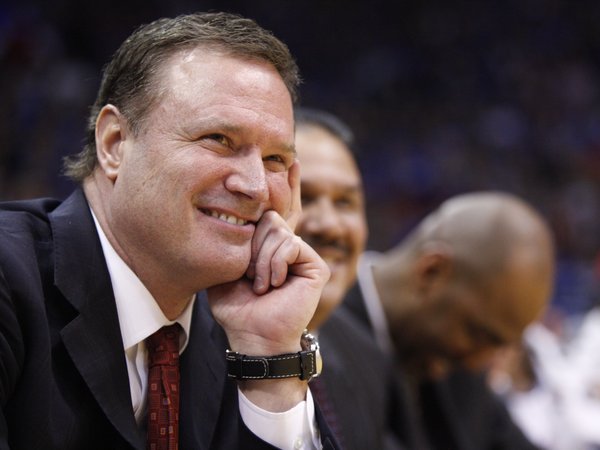 A: In a way, I think he needed something like this, because he had developed a reputation as a coach who was, for whatever reason, unable to land the big fish, even though he did get Josh Selby. That didn't really work out. He hasn't been able to land these guys on a consistent basis. I've never understood why. But I think this helps his reputation. Now, he needs Wiggins to come in and really live up to his potential, because the other guys that he's signed that have been this highly ranked like Selby and Xavier Henry have underachieved. He got the hard part out of the way by signing him. Now, he's got to be sure he flourishes in what's sure to be a one-year career.

Q: You touched on this, but what should the expectation be for KU this year now that this has happened?

A: We all know that expectations are always out of whack for Kansas fans. They want too much, too fast. I do think this is a team that could be capable of contending for a Final Four berth, but I think fans need to be patient — and now more than ever, because this is a highly inexperienced team, and they have the toughest schedule I've seen a Kansas team have in a long time. They need to expect some bumps early. But if they're patient and let the best coach in America do his work and trust him, then I think by mid-January, they'll be rolling and be really good when it matters most, because I do think that will happen. I think the key is not to overreact too quickly if there are some struggles early, because those struggles will just make the team stronger in the long run.

Thank you Jesse for making this site better, why I check it every hour not once a day!

Jason, I enjoy your work but I don't agree that Xavier Henry underachieved while at Kansas. You can check the stats but he was the second leading scorer on a very talented team (Collins, Morris twins, Aldrich).

Jaydee I agree with you about X. I think many people wanted him to put the team on his shoulders like Durant and many other people base his KU play on his NBA performance. Neither of those are fair. He did a good job at KU really did help with winning the Big 12.

One problem is that these Kids are hyped so much that geneticly engineered Wilt/Jordan/Santa Claus couldn't live up.

Ya just what I need a "journalist" telling me that a guy "underachieved" because of his high school hype. I wish Coach Self and the walls of AFH could talk. Winners are self made NOT born!

Beal was ranked highly coming out of STL, Ben wasn't. Both yet both are going to be number 2 picks. Obviously Coach Self is an idiot(and yes I realize that Ben was in college a year longer but remember Coach Brown had some great things to say about Ben last year!)

What a great day in Hawkland!! Jessie, great job in bringing us this interview. Jason King shares a lot of insightful thoughts and comments and he's right on. I think the most important point he makes is for the fan base to chill and let the team grow and develope in November and December. Losses in that time period against mature, talented teams are going to happen. As fans, we should keep our composure and stop complaining, whining, panicking and throwing everyone under the bus. Instead, we need to show MORE support and keep the faith in our coaching staff and players and we'll be fine.

People are sleeping on Naadir at the PG. Going to be a stud.

High Expectations from us fans... nah.. All I want is 40-0 with a drubbing of UK in the title game. Nothing more.

Like the historic game when we crushed them at the field house and scored 150 on em. Something like that?