To get a better feel for the Kansas men's basketball team's long-range tendencies, I consulted CBSsports.com's shot charts and marked down the location of each three-pointer taken by KU's five most frequent outside shooters.

Green Xs are made threes, while red Xs are missed threes. 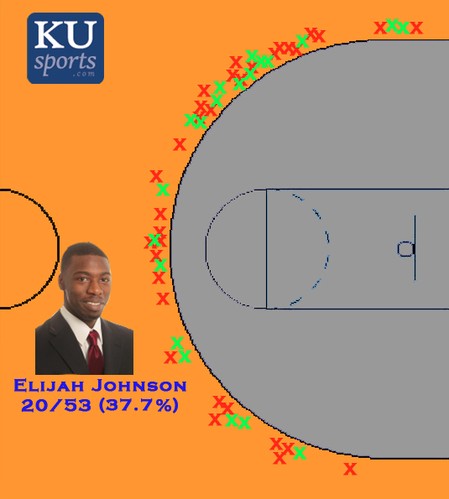 • Johnson's made threes are distributed fairly evenly, though his go-to spot appears to be the left-side wing. Half of the senior's threes have come from that area (10-for-24 shooting, 41.7 percent). 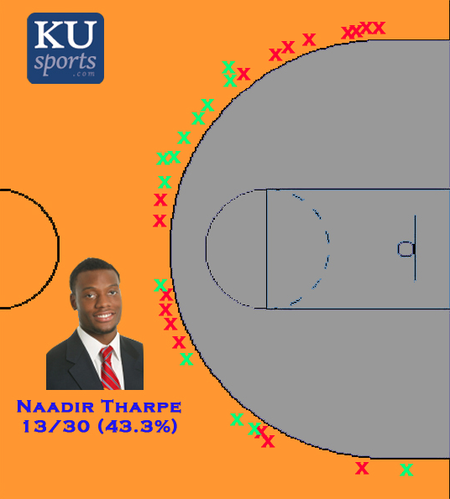 • Talk about a hot spot. Tharpe thrives on the left side as well, but he's best just the left of the circle. Tharpe is 8-for-8 in that location this year, but when he moves farther left down the perimeter, he's 0-for-8. It's a small sample size but interesting nonetheless. 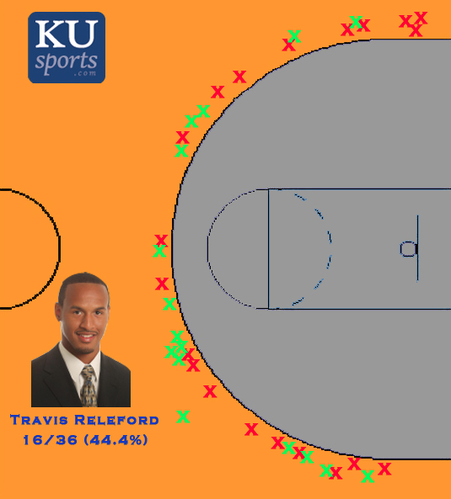 • Releford appears to be most comfortable on the right wing, as he's made six of nine shots from that location (66.7 percent). Also notice that 21 of Releford's 36 three-point tries have come from the right side (58 percent). He doesn't appear to be a fan of shooting from the deep corners, attempting just three shots there while making none. 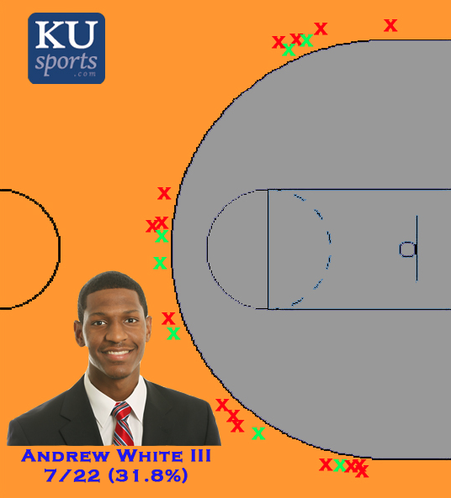 • There's not as much data yet for White, though I do find it interesting that 19 of his 22 three-point attempts have come in four distinct locations. White also appears to like the straight-on shot, as five of his tries have come from that area (only Johnson has more). 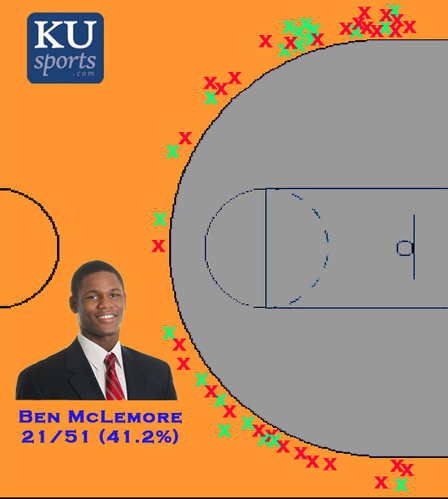 • Though I would have bet money a couple days ago that a majority of McLemore's threes were from the corner (doesn't it seem like that?), the shot chart shows that only four of his made threes have been from there. The deep left corner might even be his most inefficient shot, as he's just 3-for-12 in that location (25 percent). McLemore actually is best a few steps away from the left corner, where he's made seven of 10 threes. The freshman doesn't appear to have a glaring weakness, making a three on nearly every spot around the perimeter.

Great analysis. I think reason McLemore has a high number of attempts on the left side is due to a couple of set plays Self has used since Rush to give our best shooters and open look on that end. One of them is an end of the half play, the other is a good half court play. One of the bigs sets an off-ball screen for McLemore that often leaves him open on the left side. We tried running it a couple times for White but he was blocked both times.

Yeah, I definitely agree with that and was thinking the same thing regarding Andrew White III above. It seems like Self's set plays usually free White up in one of those four clusters on his shot chart. I'm sure the guys practice all three-pointers, but it's interesting that they do end up at certain locations much more often than others.

A predictable response from someone. Somehow I think that Temple would probably have figured this out on their own anyway.

Lighten up, Francis -- it was a joke.

Its "Temple University", not "University of Temple"

All very interesting but did you ever consider that doing our upcoming opponents scouting report might not be the best thing. I have. Wonder what Bill thinks. Sure the opposing coaches will probably figure this stuff out but let them stay up until 3 in morning doing it instead of giving them a template. Just something that occurred to me while reading your explanation of the inbounds plays at ohio state. You just might be doing a disservice to the hawks.

Totally agree. Imagine if these images would have been posted halfway through the 2008 season and Mario was guarded just an ounce better...

I think you're greatly underestimating the amount of information that is out there.

There's a service called Synergy that provides video feeds to most NCAA teams for an expensive fee that I know KU subscribes to. With that, you can get individualized breakdowns of players on teams. From my understanding, you can select "Temple Khalif Wyatt pick-and-roll situations" and boom, you have a five-minute video of every pick-and-roll he's had this season that can be sent to your iPad. The same for three-point attempts.

Basically, if Temple wanted this info, it most likely could have had it in minutes and not worried about sifting through shot charts or ESPN3 like I did.

And, as someone else mentioned above, if Temple is resorting to the Newell Post for its scouting report, then I think the Owls probably don't stand much of a chance anyways.

thanks for addressing this concern, Jesse.

We should all feel better now knowing that the Temple coaching staff doesn't get paid millions of dollars to perform google searches for their opponents tendencies and strategies.

"Basically, if Temple wanted this info, it most likely could have had it in minutes and not worried about sifting through shot charts or ESPN3 like I did."

No they wouldn't have to wade through ESPN shot charts like you because all they would have to do is google your blog.

Not picking a fight with you Jesse, just seemed it made the info easily and readily available. But I'll buy your explanation.

Ok, the heck with being nice about:

If you are the Temple coaching staff and relying on JNewell to scout the toughest team that you will be playing on your schedule this season, wave the white flag now! Let them make a game plan to stop the Jayhawks 3-point shooting. That same CBSsports data shows that the Jayhawks score more than 65% of their points within 3-feet of the basket. Stop the trey and it will rain dunks and lay-ups all night. Let the Temple coaching staff come up with their best plan with or without JNewell. In the wise words of Mike Tyson, “Everybody has a plan until they get punched in the face.”

Nope. I will choose our rotten little brother over the PAC.

Sorry RC. It's just not the same as Misery.

They would not extend you the same courtesy, KG. I understand the concept of "being the bigger man," but it has its limits.

I know too many K-State grads that already do extend me that courtesy. No matter what you want to believe, it's not a hateful rivalry like MU was. It's more playful than hateful. Sure, darts are thrown back and forth and some fans go further than others, but way to many families have grads of both schools. Way too many living rooms filled with both fans during our matchups.

I think I will wear my conference colored glasses tonight.

Your cheering against K-State makes perfect sense. That way we can start bragging about 50 point losses to a team not even good enough to win a bowl game.

Not bragging, sir. And no ground to stand on to give them grief. If they lose, KU fans should only maintain a quiet pleasure.....no taunting.

I am from the middle of Kansas; heart of Cat Backer country. For those of you Eastern Kansans...yes, Missouri was the rival.

But to us few, proud KU mid-staters...K-State fans are the most obnoxious, arrogant, and delusional group of people you've ever had the misfortune of knowing. And it's easy to call it playful when you've never experienced the belly of the beast.

As KU fans, we shouldn't even give them a second thought. After all, the Border War was a true rivalry. But these people flat out hate us, and would show us no Big XII empathy or compassion.

KSU is a rival, MU is the enemy.

I mentioned this data in the article about our defensive 3pt. shooting percentages. Jesse, can you show us where Temple's hot and not-so-hot spots are? (Maybe it will help silence the paranoids, by leveling the playing field for Bill. Lol.)

Yes, of course Bill already knows, especially since you mentioned the detailed recon Synergy has made available, but can we see it too? Exactly how you've laid this out? I'd like to see how, or IF, we work defensively to keep shooters out of those spots on Sunday.

OMG, Jesse, please don't tell Temple the Jayhawks will be trying to hold down their % on trey attempts!

As John Wooded once said, and I am paraphrasing a bit, but, We will give you are plays and tell you when we are going to run them. But we will still score on them because we run them so well.

Was that paraphrased quote from an afternoon on the deck at Sam Gordon's pool?

Echo those who are saying that any team that could've benefitted from this chart does not deserve to be on the same floor as KU. Mildly preposterous claim you guys. So rather than suggesting that Jesse is somehow giving an unfair advantage to the Temple owls, let's just appreciate the fact that he is providing consistently solid analysis that, as he mentioned, takes a lot of work to put together (if you're not using Synergy :) ) I, for one, am enormously interested in this stuff, and if nothing else, I can impress my friends next time I watch a game.

Thanks for putting it together, Jesse.

Great information, thanks Jesse. With and inside, outside game like KU is playing right now it will be hard to stop the Jayhawks.

Just a matter of time before this technology is used in college BBall...

ho hum..everyone knows what is everyone's pockets. Jesse does not accoumt for the Self factor. You shoot when HCBS tells you to based on the matchups..Pretty pictures though.

Here is an interesting follow-up article:

I would further color code these for date each shot was taken, so we can then see the migratory effect of opposing coaches taking away hot spots for players. For example, I wonder if Ben's cluster of makes occurred and was followed by defenders denying him that spot and giving him the spot farther toward the base line, where he grows less accurate. Or is the effect just random?