After talking with new/old Kansas receivers coach David Beaty in the spring, I could tell one area that he especially wants to stress is blocking. 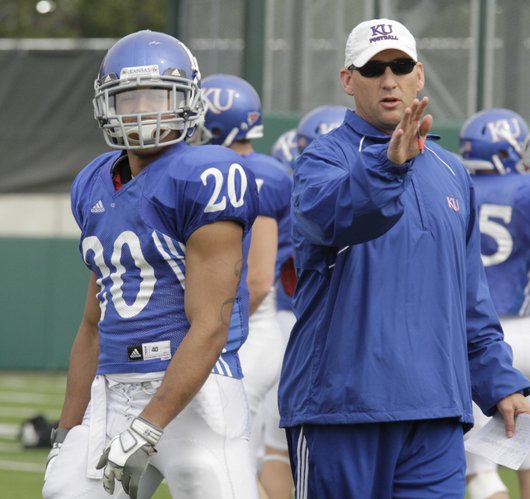 In Beaty's two previous seasons with KU in 2008 and 2009, much of the Jayhawks' success offensively came because of well-executed wide receiver screens.

For this blog, I wanted to get a little more into wide receiver blocking, an area many of us overlook while watching the games because we tend to follow the football.

I once again have consulted a Div. II offensive assistant coach, someone we'll just call "Coach" in this blog.

After going through film, I pulled out each of the Jayhawks' wide receiver screens from last year's Colorado and Missouri games and also this year's spring game.

I then had Coach grade each play.

With his receivers, Coach reviews film of every play, giving a grade of either 0, 1 or 2.

Here's a look at how Coach would have graded each of KU's receivers on the following seven plays. Use the video clip above each breakdown to follow along with Coach's assessment.

Coach's words: "No. 83, the receiver on the outside (Chris Omigie), he doesn’t initially take a very good angle to make sure and cut off the cornerback. You see how he lets the cornerback get inside of him right there? He’s really pretty lucky that that cornerback didn’t really get a big hit on his slot receiver right there.

"Now obviously, this slot receiver (Daymond Patterson) doesn’t do a good job of catching this ball on the first try. But really, that wide receiver, No. 83 up there, needs to step inside first to protect against the inside from this corner right here. Then, if the corner does come back outside, then he can get back and return to his original aiming point. Footwork first."

Grades: "I’d probably give them both zeroes, No. 83 (Omigie) for his technique, and then the slot receiver (Patterson) for a drop."

Coach's words: "This is an outside receiver screen right here. The two inside receivers (Tim Biere and Patterson) both do a pretty good job of keeping two of the defenders away from their outside receiver right here. They both go to cut, and neither one of them actually gets their guy down on the ground, but they do an OK job at occupying them long enough to give their other receiver time enough to make a good catch and get a first down here.

"If you’re going to go cut a guy, you definitely want to get them down on the ground. Some keys to a cut block are making sure you don’t try to cut too early. You need to have very little space between you and the defender.

"And a lot of times, you’ll see guys making mistakes in cutting. They try and cut down around the shins or down around the ankles when really their aiming point when they go to cut should be at the thigh level. And (they need to) run through their cut, not just dive at them and dive straight down into the ground — really run through when you go to cut. Now eventually, you will dive and end up on the ground, but you really want to have a lot of momentum going so that you can take their legs out from under them."

Grades: "I would grade all those guys ones right there. There was nothing spectacular that really went on, but they all pretty much got the job done and they ended up getting a first down out of the play."

Coach's words: "No. 86 (Biere), he’s the one on the line. He initially doesn’t do a great job right there. Notice how he kind of takes too wide of a step with his first step and allows that defender to go directly inside of him right there? That could have caused a big problem for KU if that defensive back would have looked up and saw the ball. He could have had an easy interception and return for touchdown right there. He almost overruns the play.

"He needs to be a little more patient and let the guy come to him so he can keep him covered up right there. Now, he does come back and gets a nice knockdown on the play when No. 17 reverses his field. That’s good.

"The No. 3 receiver, the slot receiver (Kale Pick), when he goes to cut this guy, he doesn’t really run through it. He kind of just dives down at the guy’s ankles. 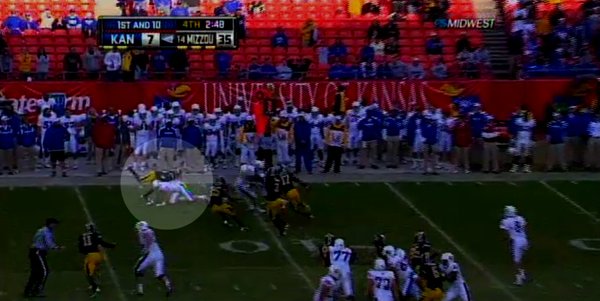 "See, he needs to continue to run his feet and run through his cut right there and really try to work to get the guy down on the ground. Now, he does occupy the guy long enough, so if the ball would have been caught, he would have technically had the guy blocked. He kind of just stuffs his face right down into the ground."

Coach's words: "81 (Johnathan Wilson) probably just could have ran through his hit a little bit harder. See how when he goes to hit him on the 20-yard line how his feet get stuck in the mud right there? He could have really ran his feet and shot his hands through the guy’s chest and really just continued to run his feet, instead of having his feet and hands kind of go dead right there. See how he kind of gives him the chicken wing instead of putting his hands right into his breastplate and really running his feet?"

Grades: "(Colorado's) No. 3 doesn’t make the tackle, and 81 (Johnathan Wilson) does a good enough job to allow 15 (Daymond Patterson) to get upfield a little ways, so I’d give him a one right there.

"I expect most of my guys to be able to make that move right there. He didn’t stand much of a chance, obviously, because there were two or three defenders out there. That was an overall productive play right there, though, by the receivers."

Coach's words: "Really good job by 81 (Johnathan Wilson). See how No. 81 has a nice aiming point and basically has his nose on the corner’s outside number? And really, No. 15 should continue to chase the numbers, see, because 81 has the corner blocked. 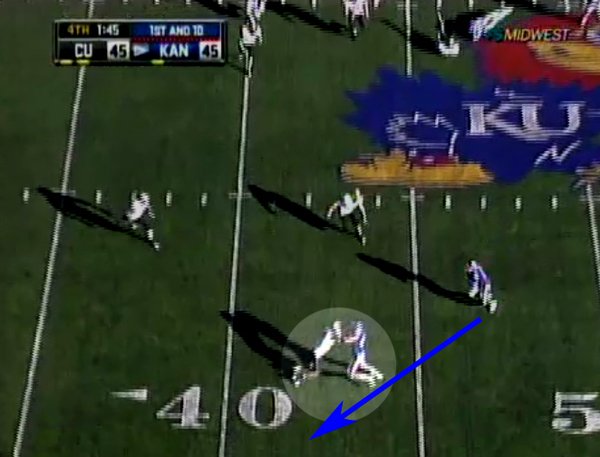 "81 has a nice aiming point. He’s using his hands well. 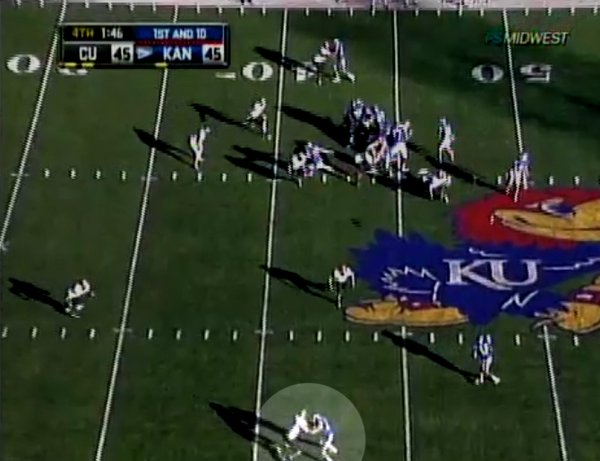 "If No. 15 continues to chase the bottom of the numbers to the outside here, they’re probably going to have a lot bigger play than what they ended up having, because he cut back into trouble.

"You teach your guys on bubble screens like this to chase the numbers and really continue to work outside, because all the defense is coming from the inside. And he cuts right back into trouble here. Trust your outside receiver to continue to work this guy up the field and go outside and try to get some big yards here."

Grades: "81 could do a little better job. See how he’s giving a bunch of ground right here? 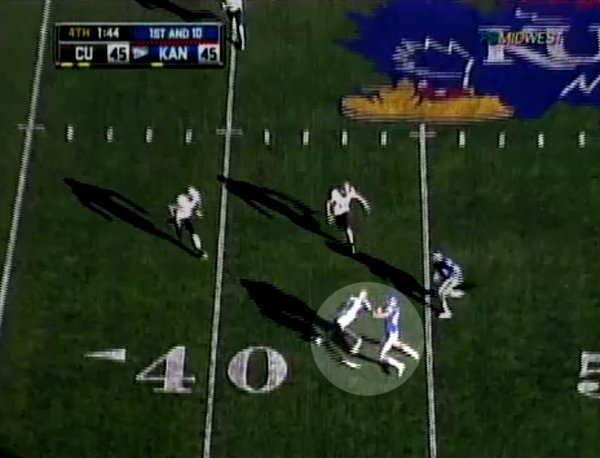 "He could really drop his butt and try to drive this corner back more and give 15 a better angle to run, but he really does a good enough job right here. I’d give both receivers a one."

Coach's words: "The No. 2 receiver, 43 (Ted McNulty), does a good job. He gets his hands on the defensive back. He could have his butt down a little more and drive his feet a little bit harder.

"I believe it’s No. 46 right here (Jimmay Mundine), his guy makes the play.

"The No. 1 receiver (Erick McGriff*), I think he’s doing an OK job here. I think he realizes that the defense is playing man-to-man, and he’s just going to run the corner off, which is totally fine as long as the corner continues to run with him. See how the corner turns a man turn to him? 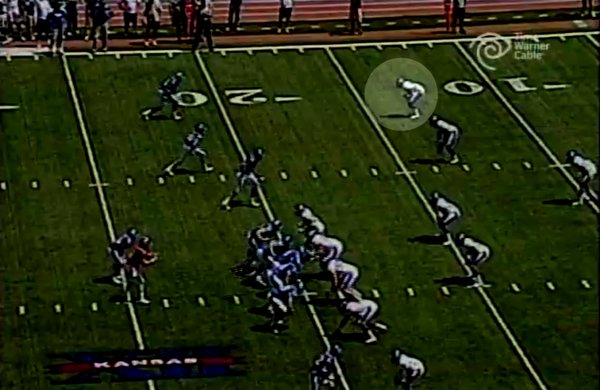 "A man turn is turning toward the receiver. Zone turn would be turning to the inside of the field. The cornerback doesn’t take a zone turn; he takes a man turn to that receiver. And the receiver just runs him off.

"If you can tell the guy’s going to play man-to-man by reading the coverage and reading the defense, then yeah, just go ahead and run the guy off."

* — It's hard to tell which receiver this is from the film, though it looks to me like it's McGriff.

"(Mundine), zero. His man makes the play. The No. 2 receiver (Connor Embree), I’m going to give him a one, because he really didn’t stand a chance because his No. 3 receiver didn’t get it done for him right there."

Interesting. I enjoy these in depth articles. Jesse, it would be great if "Coach" could come back later in the season and see if the WR's / coaches have improved.

I enjoy these articles as well. I have to say that I've never been a fan of the WR screen. At least the ones that KU runs. Going back to the Nick Quartaro days, it always seemed to me that our screens were more likely to fail than succeed. I get a little envious watching other teams run their screens and consistently get good yardage, whereas everytime I see our screen develop, I'm praying to God we don't turn it over. Is it a failure of execution or are we dialing it up too often? Or at the wrong times? And why don't we run more tunnel screens?

Great article! I didn't see any plays/players getting a 2-grade though. Hopefully, that'll change come fall. Another factor that wasn't graded was the quarterback getting the ball out there in a timely and accurate manner.

Love Newell and Tait, but we need Keegan to get the blood boiling every so often!

You do know that Mundine and Embree did not play last year, right? Embree wasn't even on the team.

So, not sure how they could be have been the ones that got graded.