Marcus Morris has moved past his hot-potato stage

Kansas forward Marcus Morris has played in six games this season. And he has just four turnovers.

When I first told Marcus about the statistic earlier this week, he said he thought he had more than that. After handing Marcus my stats sheet, he came up with a reason for the low number.

"They might have gave (my brother) ’Kieff some of mine," he said with a smile. 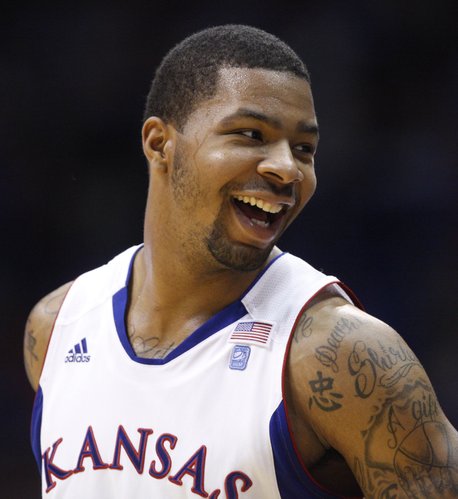 Kansas forward Marcus Morris flashes a smile as the game winds down against Texas A&M-Corpus Christi during the second half, Tuesday, Nov. 23, 2010 at Allen Fieldhouse. by Nick Krug

In all seriousness, Marcus' turnover numbers this year are pretty amazing, especially considering that he wasn't always one known for protecting the basketball.

During his freshman year, Marcus picked up five turnovers in his first 47 minutes.

This season, he only has four giveaways, and that's in 151 minutes.

"Freshman year, it was kind of like hot potato," Marcus said. "It was, like, get Sherron (Collins) the ball, get Cole (Aldrich) the ball, so it was, like, give it to them by any means necessary. If the (defender's) right there, still try to give them the ball. 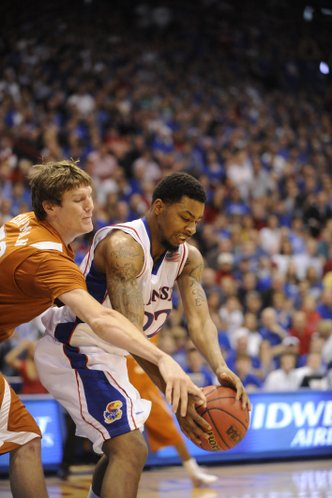 "This year, when I’m getting it in my hand, I’m holding it. I’m comfortable with it, and I’m making the right plays."

Marcus has made a steady progression over the last three years in regards to turnovers. During his freshman year, he turned it over on 21.9 percent of the possessions he used. His sophomore year, that number was down to 13.6 percent. 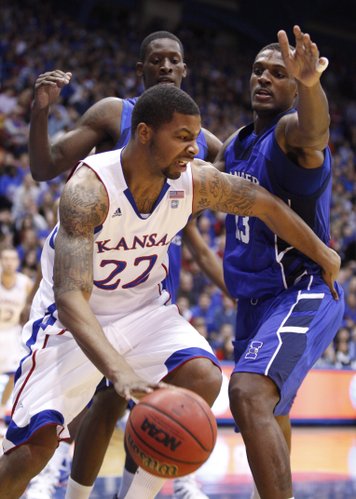 Kansas forward Marcus Morris fights his way out of a trap by Texas A&M-Corpus Christi defenders Justin Reynolds, right, and Horace Bond during the first half, Tuesday, Nov. 23, 2010 at Allen Fieldhouse. by Nick Krug

"That’s just good to know that I’m protecting the ball a little bit, not being as careless as I was in previous years," Marcus said. "I think that’s a part of my game, knowing that I’m one of the leaders on this team, that I’ve got to lead by example by protecting the ball. If you see one of your leaders turning it over less than anyone, then I think the team will follow."

So far, the Jayhawks have.

One of the reasons that the Jayhawks are tied for the top offense in the nation (according to KenPom) is because of their low turnover numbers this year. 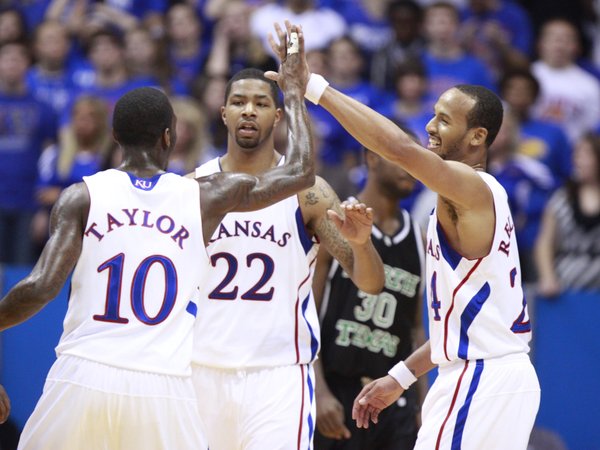 Kansas teammates Tyshawn Taylor, Marcus Morris (22) and Travis Releford come together for high fives during the second half Friday, Nov 19, 2010 at Allen Fieldhouse. by Nick Krug

The Jayhawks haven't faced great competition yet, but so far, they've only turned it over on 15.9 percent of their possessions — good for 14th nationally.

Under Self, the Jayhawks have never ranked in the top 60 in offensive turnover percentage.

KU is fortunate. Not only is Marcus Morris getting great shots and making almost all of those shots (his eFG of 73.8% is 17th nationally), he's also taking care of the ball when it's in his hands. 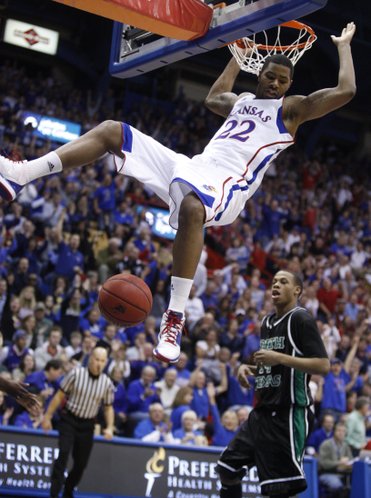 Kansas forward Marcus Morris comes down from a dunk against North Texas during the second half Friday, Nov 19, 2010 at Allen Fieldhouse. by Nick Krug

It's remarkable how far he's come in two years.

He is fun to watch. In response to your last sentence------"no kidding!"

Great article, as usual, Jesse. Love the way the photos are woven in with the text.

Photo #3....Love the fire in that expression. And as usual, Nick's photos are fantastic captures of the moment.

This team has a lot of potential. I am excited to see how far they can go. I think that the Morris twins are a key part of that. They have come along way and it has been great to see them develop as players and as people.

Great article. Marcus is in beast mode. Hopefully it will last all year.