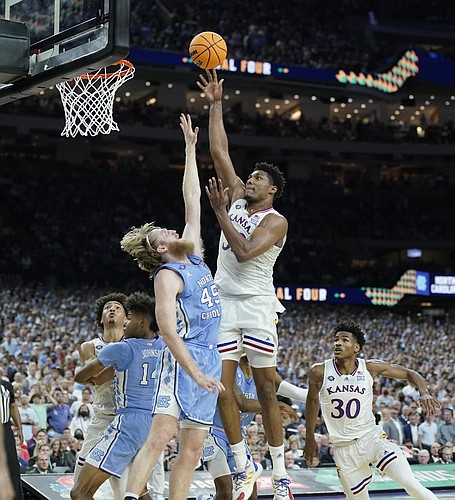 He also broke down, at least partially, what will go into his decision on whether to play another year of college basketball or make the jump to the professional ranks and also talked about how having the option to even consider coming back to KU was a luxury that many players do not get.

KU coach Bill Self said he thought McCormack, Christian Braun and Jalen Wilson all would make their decisions about their futures known in the next week or so. Self also said no one should hold their breath over All-American Ochai Agbaji considering doing the same.

"It's time for him to go," Self said of Agbaji, who joined McCormack and Mitch Lightfoot in winning this year's Danny Manning Mr. Jayhawk Award. 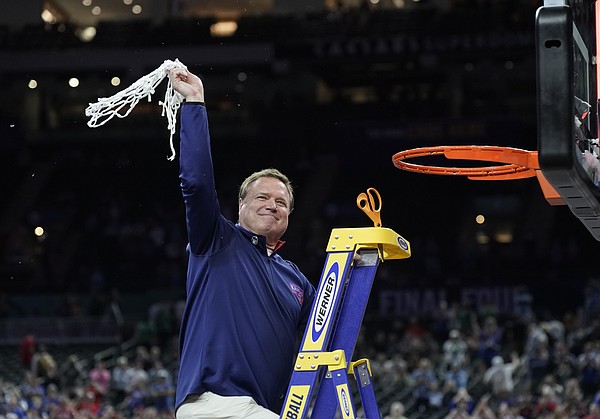 Kansas head coach Bill Self swings the final cut of the net as the Kansas Jayhawks celebrate their 72-69 win over North Carolina in the NCAA National Championship game on Monday, April 4, 2022 at Caesars Superdome in New Orleans. by Nick Krug

In addition to a video celebrating the season and hundreds of fans joining the fun, Kansas coach Bill Self thanked all the people who helped the Jayhawks win their latest title, saving special recognition for the KU players.

He discussed them one by one, taking jabs at some and showing great appreciation for all.

The Jayhawks also collected the NABC trophy and posed for photos and signed autographs afterwards.

Seniors Ochai Agbaji, Mitch Lightfoot and David McCormack were the co-recipients of the Danny Manning Mr. Jayhawk Award, given annually to the player who best embodies what it means to be a Kansas basketball player.

An up-close look at the 2022 Kansas basketball championship parade 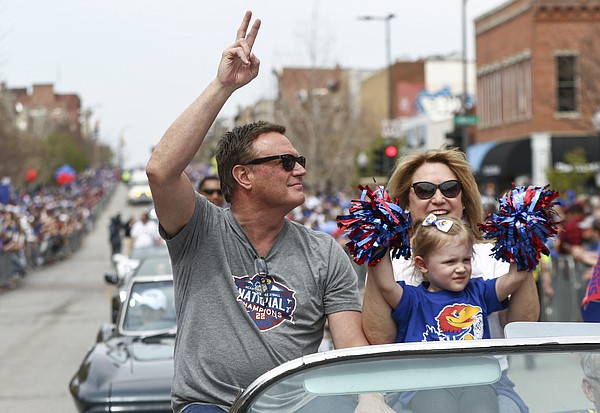 Kansas head coach Bill Self and his wife Cindy and granddaughter Phoebe ride in a parade Sunday, April 10, 2022, to celebrate the KU men’s basketball team winning the NCAA basketball championship. by Mike Yoder

They came from all over by the tens of thousands to show love to the 2022 national champion Kansas Jayhawks.

On a perfect spring day in downtown Lawrence, tons of red-and-blue-clad KU fans packed Massachusetts Street to send off the champs in style with a championship parade that covered 13 blocks and every joyous emotion you can imagine.

Lined up as much as 10 deep on both sides, fans packed Lawrence's main celebration spot from 6th Street to 19th Street, screaming and cheering as their favorite players and coaches rolled by.

Some held up trophies and tossed out T-Shirts. Others smiled and waved, soaking up the love. Some hopped out of the cars they were in to say hey, sign an autograph or give a high-five. In all, a fleet of 48 cars drove the Jayhawks down Mass. Street in style.

Here's a look back at some of the fun from inside the barricades.

Watch the 2022 ‘One Shining Moment’ video, featuring a heavy dose of your national champion Kansas Jayhawks 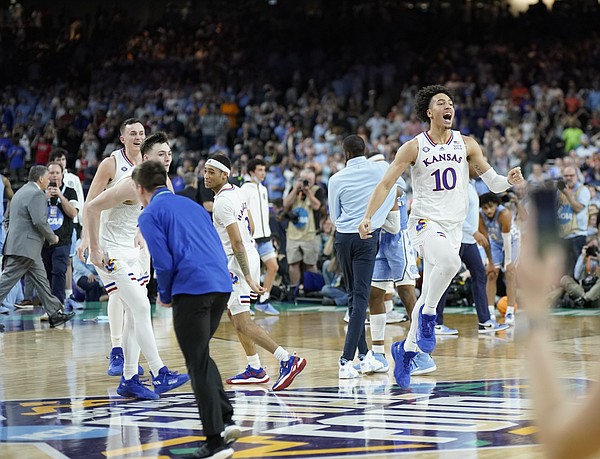 Kansas forward Jalen Wilson (10) skips off the court as the Kansas Jayhawks celebrate their 72-69 win over North Carolina in the NCAA National Championship game on Monday, April 4, 2022 at Caesars Superdome in New Orleans. by Nick Krug

Bill Self, Kansas players speak after winning the NCAA title

Bill Self on David McCormack, Remy Martin & how these champs compare to the 2008 crew 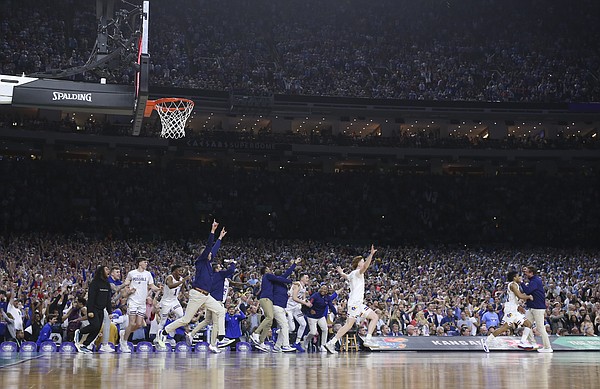 The Jayhawks race onto the court as the buzzer sounds in their 72-69 win over North Carolina in the NCAA National Championship game. by Nick Krug

Sights & sounds from a Final Four Saturday with Kansas Basketball

Sights & sounds from a Final Four Saturday with Kansas Basketball by KUsports.com