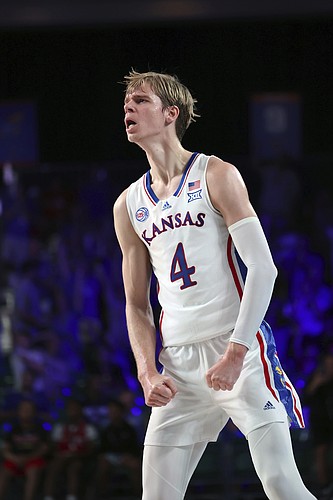 Before we dive into today's rankings, here's a quick update. Although I did not write a recap from the Southern Utah game due to being in the hospital for the birth of our second child — an amazing baby girl named Molly — I did watch the game later and spit out quick rankings to factor into the season standings. Those numbers have been added in here and will be carried forward.

1 – Gradey Dick – We’re still a little way out from him filling up a stat sheet — perhaps years, even — but as long as he continues to fill up the basket, no one’s going to care too much about what the rest of his line looks like. Dick was sensational in the first half of KU's 80-74 win over NC State on Wednesday, stepping into every shot with confidence and refusing to be hesitant at any point. It’s easy to say that teams are going to catch on to his talent and start to scheme to stop him. But his length, quick trigger and high release make it less likely that any of those plans will be consistently successful.

2 – Jalen Wilson – Made just 5 of 15 shots overall and missed four free throws, as well. But those numbers actually make his final line even more impressive. Wilson finished with 19 points and 11 boards in 35 minutes and he really flipped the game when he stopped settling for jumpers — guarded or unguarded — and started attacking the paint. He can do both. But he’s best when he attacks downhill and puts opposing defenders on their heels.

3 – Dajuan Harris Jr. – Fourteen points and 6 assists in 35 minutes is pretty good for any point guard. But Harris no doubt looked at the 3 turnovers and was a little pissed. He got a couple of them back by drawing charges and hit a couple of big buckets late, prompting Kansas coach Bill Self to call him “as good a winning guard as there is.” That’s all that matters to the Jayhawks and Harris, who continue to win with him running the show.

4 – KJ Adams – There’s a play — or two or three — in every game that reminds you why Adams starts, how talented he is, how much he cares and how hard he is to take off the floor. And no one really even blinks when they happen anymore. Talk about a guy finding his role. Adams has looked slightly more comfortable on offense as the season has gone on — especially at or above the rim — but his top priority and most important role night in and night out is always going to be out-hustling everyone on the floor. He did that late in Wednesday’s win, rebounding a missed 3-pointer by Jalen Wilson and flipping it back to Wilson in the corner to set up a hard Wilson drive to the rim that put Kansas ahead 67-63 with 5:46 to play. One a game. Every game. Every team needs a player like Adams. Few actually have one.

5 – Kevin McCullar Jr. – McCullar was great on the glass, tying Wilson for the team lead with 11 boards, and that helped make up for his 2-of-6 shooting performance. There’s plenty to like about his game. He’s active, competes, plays defense and likes to run the break. But I’m still not convinced that pulling deep jumpers is what he needs to be doing. There was talk from Self during the preseason about McCullar’s jump shot being the determining factor for just how good he could be this season. It looks like McCullar heard that and is trying to show he can shoot. He’s hitting 40.5% overall and 36.4% from 3-point range, so it’s not like it’s a huge problem. But I’d like to see him operate more as a scorer off the balance, in the mid-range and in transition than as a jump shooter.

6 – Bobby Pettiford – Pettiford looked a little sped up and scattered during portions of his 18 minutes on the floor on Wednesday. Definitely not his best game. But the fact that he was out there twice as long as any KU big man not named Adams shows you how far he has come in the Self trust department. He competes hard. His quickness is a bona fide weapon at any time. And he’s a team-first guy who loves to set up his teammates as often as possible. He’s perfect behind or next to Harris. Now he just needs to find a way to be a little smoother and score when the opportunity is there. His coast-to-coast bucket on Wednesday was a great read and really showed what he’s capable of doing.

7 – Zuby Ejiofor – No points and one rebound in just five minutes, but, man, he continues to look like he’ll be an asset for this team sooner than later. The reason? He’s unafraid and always looks like he’s ready to do exactly what KU needs him to do. Some games that may be next to nothing. Others, it could be more. Either way, I think we’ve seen that Zuby will stay ready.

8 – Ernest Udeh Jr. – Udeh played 9 minutes in this one and made one of two shot attempts. The other he had next to no chance on. He continues to look like he has the biggest upside of any of KU’s true big men, and it’s clear he wants to be great. He just needs time. Time and patience.

9 – Joe Yesufu – Played just 5 minutes and missed his only shot while committing one turnover and one foul. Not anything to write home about for Yesufu, who pledged before the season that he would be a way different player for Kansas this season than he was last season but still has yet to show it on a consistent basis. There’s time, but you have to wonder about his mindset and confidence even if it is still early in the season.

Congratulations for Molly!!! A beautiful name for no doubt a beautiful little girl.

And oh, BTW, thanks for continuing to keep this going when you've had far more important things to concern yourself with.

Thanks so much! She sleeps a lot right now (and I don't) so I've had my windows. She's pretty awesome, though, and we certainly are on Cloud 9!

Welcome Molly Tait!! Congratulations to Mom & Dad on this blessing in their lives.