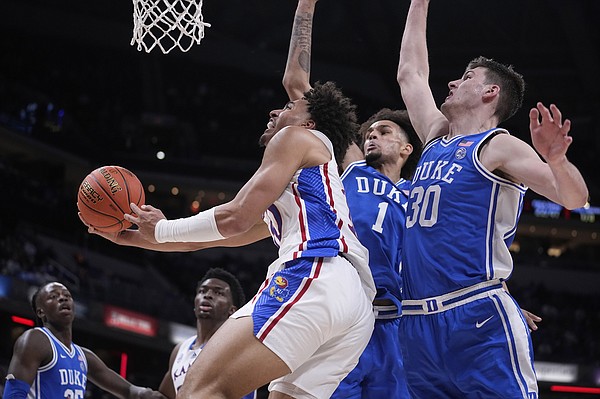 1 – Jalen Wilson – Another night, another push toward a career-high in points, and this time he got it. Wilson’s hot streak to open the season continued on Tuesday night, but not because he shot lights out. Instead, because he played exactly the way KU needed him to play and delivered time and time again. His 25 points on a whopping 26 shots in the 69-64 win over Duke illustrate that clearly. And the fact that he was able to still add 11 boards and 5 assists while playing darn near the whole game is a perfect indicator of just how comfortable this guy is as a basketball player and in his role with this team. He carried Kansas early and did it by setting the tone for everything the Jayhawks are about — tough, physical and fast. To put up that kind of game on that stage is nothing to sneeze at, and Wilson is clearly on his way to opening some eyes and having a monster season.

2 – Dajuan Harris Jr. – Few players have shown the ability to dominate portions of games without scoring the way Harris did on Tuesday night. For large stretches of this game, both early and late, the KU point guard completely controlled things on both ends of the floor. Duke coach Jon Scheyer called him “a pest” on defense. And Harris’ 10 assists and one turnover tell you all you need to do about what he does on offense. If his teammates would have knocked down more than 3 of 19 shots from 3-point range — he missed two of them — he might have wound up with closer to 14 or 15 assists. As it stands, he now has 23 assists and just 2 turnovers in his first three games this season.

3 – Kevin McCullar Jr. – McCullar finished with 12 points on 5-of-10 shooting and hit 2 of the 3 3-pointers that Kansas made all night. Both shots — along with his overall play — were huge for the Jayhawks. His biggest bucket might have come late when he tipped in a KU miss to pull the Jayhawks back within one at 59-58. A few minutes before that, he made a beautiful cut to the rim after a Jalen Wilson offensive rebound and scored a key basket to cut Duke’s lead from four to two. Those plays, and others, were enough to keep Duke from taking control and McCullar continues to play with poise and experience that is a perfect complement to what Wilson and Harris bring to the team as leaders.

4 – Gradey Dick – KU coach Norm Roberts’ line about filing a missing persons report for Dick in the second half was spot on. But like he’s done in all three of KU’s games this season, Dick showed that all he needs is a few minutes to make a major impact. That impact came late in this one, with Dick hitting three of the biggest buckets of the game. And even though he didn’t shoot it great from the outside, he was athletic and acrobatic near the rim and he scored 14 points on a massive stage, none bigger than the 7 in a row he scored late during KU’s 15-5 run to close the game. This kid’s the real deal. And finishing like that against an opponent like Duke should speed up his maturation process even more than it already was moving. Big time game.

5 – KJ Adams – He made some really big buckets in this one and the biggest reason for that was his willingness to at least look and act like a scoring threat. Adams didn’t do much of that in either of KU’s first two games, but he’s good enough to do it in every game. He’s strong and physical enough to finish through contact. He can catch lobs. And he can score on the glass, as well. He hit all four shots he attempted in this one and finished with 8 points, 2 rebounds, 2 blocks and a steal in 20 important minutes.

6 – Bobby Pettiford – He didn’t do much on the stat sheet — 2 points, 3 rebounds and 2 assists in 17 minutes — but he played enough and did well enough to allow the Jayhawks to keep Dick on the bench until he was ready to come back in for the run that sparked things late. Pettiford continues to look healthy and quick and the more he plays the more he’ll feel like he belongs. That should open up his ability to make more plays in more areas. The little runner in the lane he hit in this one, though, was a pretty crucial shot as it cut into a 6-point Duke lead and helped keep the Blue Devils from pulling ahead by more.

7 – Zuby Ejiofor – Grabbed five boards and blocked two shots in his 10 minutes on the floor. More important than either of those numbers was the fact that he was ready for the fight. Zuby played big, tough and tenacious for all 10 of his minutes. The more he’s out there in games like this and the longer Zach Clemence and Cam Martin are injured, the more you can see the Jayhawks’ big man rotation this season coming down to the two freshmen and KJ Adams. Time will tell. But Zuby has proven that he’s ready whenever they need him. Tuesday’s game should wind up being huge for his confidence.

8 – Joe Yesufu – He missed all four shots he attempted — a building concern — but did pick up a key steal late and also took a charge early. There was a lot of talk about Yesufu being more comfortable and ready for a bigger role this season. KU still could use that from him, but he hasn’t shown it to this point. Played just 5 minutes.

9 – Ernest Udeh Jr. – It wasn’t his best night, but he was active when he was in there. Especially as a shot blocker, finishing with a team-high 4 of KU’s 13 blocks. He finished with just one rebound, though, and only played 13 minutes. This game was all about maturity and experience for Udeh. There’s no doubt that his effort and desire were where they needed to be. But he hasn’t played enough at the college level yet to find a way to make his coaches keep him out there in a game like this. Still, the minutes he gave were valuable.

z – Missed Nov. 15 game at Duke because of injury

Confident Wilson = NC back to back!! I still wish he can dunk, though.. otherwise, it'll be harder for him to compete in the top20.

Gradey came in sparked the win. Clearly Wilson was the best player on the floor and Harris was steady...Gradey was a playmaker when the team needed it at the end.

McCullar's block called foul on a 3 foul trip was a spark to Duke, but they weren't able to fully capitalize on it. In the second half, I believe that there were 8 fouls to 2 until the end, of which 3 occurred on the single trip.