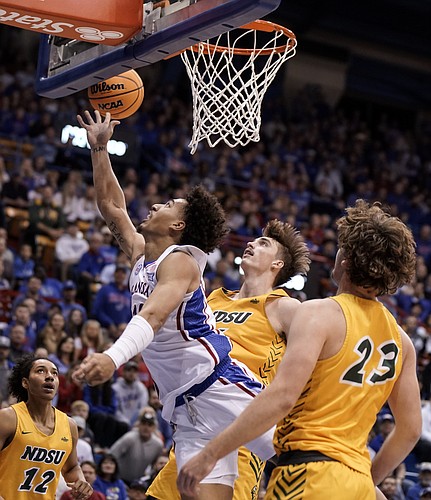 Kansas forward Jalen Wilson (10) gets inside for a shot as he is fouled during the first half, Thursday, Nov. 10, 2022 at Allen Fieldhouse. by Nick Krug

1 – Jalen Wilson – The man scored 17 points on 6-of-8 shooting in the first half of Thursday's 82-59 win over North Dakota State, with most of it coming in silky smooth fashion. On top of that, he also led the Jayhawks in rebounding, with 9. It’s starting to feel like Jalen Wilson is going to start every game in attack mode and look to set the tone for others in a way that some of KU’s past leading scorers didn’t always do. Ochai Agbaji started to do it in Big 12 play and during the NCAA Tournament run. But for much of his All-American season a year ago, Agbaji let the game come to him and then took advantage when it did. With so many young guys and unproven scorers around him, Wilson’s in a slightly different role and he knows it. His assertiveness to open games is exactly what KU needs and will continue to need throughout the season.

2 – Bobby Pettiford – Eight assists in 19 minutes with just one turnover is nasty. Taking just one shot (and making it) was an equally important part of Pettiford’s Thursday night line. Talk about a guy who gets it. The sophomore point guard is off to a terrific start to the 2022-23 season in large part because he’s playing hard and making the simple plays whenever he can. Always content to look to set up others — but also ready and willing to score when needed — Pettiford is a ridiculous luxury to have to a point guard like Dajuan Harris. The two can spell each other or they can play together, and, either way, Kansas never misses a beat.

3 – Dajuan Harris Jr. – Harris was less aggressive offensively in this one — just 2 of 4 from the floor as opposed to 5 of 13 in Game 1 — but just as intense as he needed to be defensively. The numbers weren’t eye-popping but the production and impact was. Harris, like Wilson, is a tone-setter for this Kansas team. He delivers on every possession defensively, and he loves to get out and run or position others to do so. He’ll have better scoring nights, but as long as he’s leading the way in those other areas, he’s doing what he needs to do. Finished with 5 assists and 0 turnovers in 22 minutes.

4 – Gradey Dick – OK. So he can miss. Dick was just 1-of-4 from 3-point range on Thursday night and 5-of-11 overall, but he still managed to go for 12 points in 26 minutes while injecting all kinds of energy into the place with a couple of highlight transition buckets. Dick’s teammates know to look for him when they get out and run because they know he’s capable of doing things that send the crowd into a frenzy. As for his shots, misses happen, but most of them looked pure and he didn’t rush any of them.

5 – MJ Rice – Watch out for this dude. He missed the first couple of games (counting exhibition) with what Self called a back injury, but he returned in a major way on Thursday. Playing a key role on KU’s second unit, Rice was equal parts aggressive and unselfish in this one, finishing with 10 points on 5-of-10 shooting in 18 minutes. He also added 4 rebounds, 2 assists and a steal and looked like he, too, has serious star potential. He’s a dog on the offensive end and he’s trying to become the same thing on defense. That showed in both areas on Thursday in what could only be described as a strong debut for the KU freshman who will play a bunch of minutes and score a bunch of big baskets for these Jayhawks.

6 – Ernest Udeh Jr. – Udeh has the maturity of a man a few years older, now he just needs that to show up consistently in his game. But there’s no doubt it will. KU coach Norm Roberts said Udeh was better as a screener in Thursday’s game than he was in the opener, and if he continues to work on that element of his game, the rest is there. He made 4 of 5 shots for 8 points and grabbed 4 rebounds in 12 minutes. Calling him a work in progress is too strong because he’s already capable of giving KU good and important minutes. The work he’s doing is to take his game from good to great, and it’s not unreasonable to think it could get there by later this season.

7 – Kevin McCullar Jr. – McCullar’s biggest impact in this one was on the glass, where he grabbed 7 boards, including 3 on the offensive glass, clearly in response to the KU coaches telling these guys how good the NDSU big men were. McCullar’s shot was a little off (3-for-8) and he took a few ill-advised shots that he just didn’t need to take. Jumpers most notably. There’s a time and a place for him to pull the trigger on his outside shot. And showing he can hit it is an important element of his all-around effectiveness. So you can’t fault the guy for attempting a couple of them. But on a night like Thursday when the opponent was on its heels most of the game, staying in attack mode was probably the preferred approach. Still, McCullar has established himself — already! — as a key part of KU’s lineup and the more games he plays with his new teammates the more automatic every aspect of his role will become.

8 – Joe Yesufu – Yesufu looked as fast and effective in this one as he looked out of sorts in Monday’s opener. It was as if he remembered overnight what an athlete he is and how he can use that athleticism to his benefit. Yesufu finished with 8 points on 3-of-5 shooting and he knocked in 2 of 3 3-pointers, as well. There wasn’t a lot else on the stat sheet for him, but the 16 minutes he played illustrated clearly that when he plays the way they want him to play, there are minutes available for him.

9 – Zuby Ejiofor – Zuby played just 7 minutes late but grabbed a whopping 7 rebounds during that time, including four on the offensive end. Give this kid credit for understanding what being a freshman on a crowded Kansas roster means. He shows no signs of frustration or pouting and just stays ready to contribute whenever they call his name. With that mindset, and when he delivers when he gets out there, he’ll be ready for his opportunities earlier in games should they arrive.

10 – KJ Adams – It was a pretty ho-hum night for Adams, who did start again but didn’t do much in the way of statistics. He scored 4 points on 2-of-4 shooting — his lob finish was pretty vicious — and added 2 rebounds, 2 blocks, 2 steals, 2 fouls, a turnover and an assist. The biggest thing that stood out to me about Adams on Thursday night was how little he looked to score. It’s not his primary role to fill up the basket, and he’s never going to be asked to break a guy down off the dribble and get to the basket. But he probably should look at the rim a little more than he did when he catches the ball, if for no other reason than to give the guys defending him something else to think about and worry about. Nothing to worry about here, though. Adams is rock solid in so many ways and will only continue to get better and more comfortable in his bigger role.

11 – Zach Clemence – Clemence entered the game much earlier in this one than he did the other night, but he didn’t do much to warrant staying out there. A couple of quick trigger misses were part of the story, and he also missed on a drive to the rim where he was trying to do a little too much. He looks like a guy pressing to me. The best thing for him to do at this point is relax, focus on one aspect of the game and try to excel at that and watch the rest of his game come around as a result. Getting popped in the nose on a dunk attempt by one of the NDSU big men didn’t help him in this one, and it may have kept him from finishing strong and building confidence. Unlucky break there. Good for him for going up to challenge the guy, who wanted to create one of those all-time, lifetime highlights with his dunk attempt.

12 – Kyle Cuffe Jr. – Missed his only shot in 4 minutes of action and did not record another statistic of any kind. It’s crowded on the perimeter right now — especially with Rice back — and Cuffe is going to have to really challenge himself, mentally, to stay locked in and ready should an opportunity ever present itself.

KU’s Norm Roberts on the Jayhawks performance in an 82-59 win over North Dakota State by KUsports.com

Kyle seems like a great kid, but it certainly is crowded on the perimeter and could get even more so with 3 more coming next year.

In a podcast, Matt commented on Adams being so much better if he were just 2-3” taller. Isn’t that Zuby? Are Udeh and Zuby becoming the newbie version of Dave and Mitch?

Such a luxury to have MJ. It will be exciting to watch this team grow and adapt as D respond. The rest of the team was great at stepping up when the Big12 teams started focusing on taking away Ochai. We’ve got a load of options once again.

JW is playing for a lottery pick in the draft. Looks totally dialed in, playing in midseason form already.

Matt does he have the word consensus posted anywhere in his locker? :)

I'm not convinced, yet... JW played really well against weaker opponents. He needs to prove he's just as good against ranked or any div-1 opponents. His shooting has definitely improved. He still needs to improve his instinct, court vision, when it comes to finding open mates. He seems to have fun jacking those 3s up, which is totally fine. He needs confidence boost, plus resume building. But it won't be such a cinch against div1.