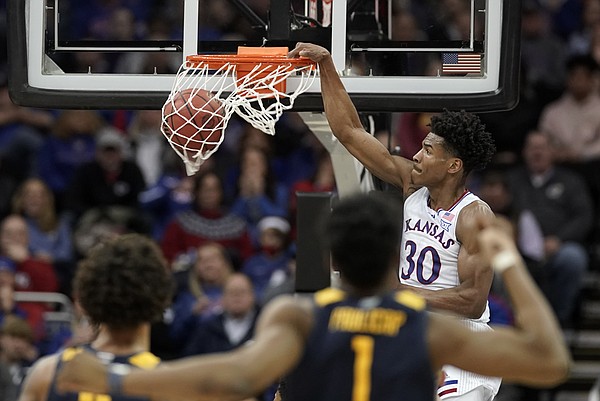 Kansas guard Ochai Agbaji (30) delivers on a lob jam as the West Virginia players watch during the second half on Thursday, March 10, 2022 at T-Mobile Center in Kansas City. by Nick Krug

1 – Ochai Agbaji – There’ve been a host of other Jayhawks in the top spot during the past couple of weeks. But not on Thursday. KU’s best all-around player was back on tap after this one simply because of his approach to the game’s first few minutes. Agbaji attacked relentlessly right out of the gate during the Jayhawks’ 87-63 win over West Virginia in the opening round of the Big 12 tournament. And he did it again in the second half to squash a 7-0 WVU run that threatened to pull the Mountaineers back into it. Agbaji has seen a lot of different defenses and felt a wide range of emotions and pressure over the past month. He’s handled it all with a smile and the poise and character of a good teammate. But on Thursday he looked like a player who was immune to any of that mess. The better the team the tougher things will be, of course. But Agbaji got his swagger back on Thursday and he did it even while shooting just 1-of-6 from 3-point range on his way to 18 points.

2 – Christian Braun – If you don’t love the way Christian Braun rebounds, I don’t want to know about it. He might not always get 14 boards, but he did today. It was a new career-high and it was the result of a very intentional effort by Braun and his teammates to make sure they won the battle on the boards against a team known for its rebounding toughness. They did, 48-27. Braun also added 11 points to those 14 rebounds and looked so fast in transition all afternoon. KU really needed him to rediscover that attacking mindset he had in December, and there was signs of it returning today.

3 – Dajuan Harris Jr. – Take your pick from the best things Harris provided on Thursday — the 7 assists and 0 turnovers, the intense defensive pressure on the WVU guards or the breakaway dunk. All were indicative of how good he was in this one. And, because of the nature of the game, he, too, was able to get a bit of a break, playing just 25 minutes in the easy win. In many ways, this was the perfect blueprint for Harris’ contributions. He shot 6 times and made 3 of them — enough to be aggressive but not too many. His 7:0 assist-to-turnover ratio is off-the-charts good. And he even chipped in with 3 rebounds and 2 steals. The thing that continues to blow me away about Harris’ on-court performances is how even-keeled he looks every time out. You’ve got to love that in your point guard.

4 – Mitch Lightfoot – I wanted to put Mitch even higher. He deserved it. But it’s just so hard to justify putting him above any of the first three on this list. We bumped him above Jalen Wilson at the last minute because he almost matched Wilson’s stat line while committing zero turnovers compared to three by the KU starter. The reserve big man had a big game for Kansas on Thursday, scoring 10 points and grabbing 5 rebounds in 22 minutes off the bench. His highlights — 5-of-6 shooting and 5 blocks — allowed Self to play starting big man David McCormack just 10 minutes, which no doubt will help McCormack moving forward as he tries to manage some nagging injuries. Lightfoot was strong, decisive and confident in everything he did on Thursday. He wasn’t perfect by any means. But if he’s capable of delivering games like this the rest of the way — and make no mistake about it; he is against 90% of the teams in the country — he could play a huge role for KU on his way out the door.

5 – Jalen Wilson – When you consider that five of Wilson’s 15 points came off of the six technical foul free throws he got to shoot, his final line takes a little bit of a hit. But he was good early in going to the glass and hit a couple of key shots that helped KU maintain its more-than-comfortable lead. Kansas will need a bigger, more physical, more athletic effort from him against TCU. I’m thinking something that resembles the way he played last weekend at home against Texas. I was told that Jalen scored a whopping 26 energy points in that one, which tracks a number of different intangible stats, including how many times a player goes to the offensive glass. That number is nuts. One KU coach marveled to me about Agbaji scoring 11 in that game. And Jalen more than doubled that. He needs to score and hit open jumpers and be an offensive threat. But that energy stat is everything for him and what he means to this Kansas team.

6 – Jalen Coleman-Lands – I noticed something about Jalen’s day today that was pretty cool to see — Self absolutely loved it. He seemed to feel good about just about everything JCL did on the offensive end, from the shots he took (and didn’t take) to the way he moved and how he spaced the floor. Lots of praise coming from the bench to Coleman-Lands today after he shot 3-of-5 from the floor for 7 points in 10 minutes. That’s the role. It’s not too complicated. But it could be very important.

7 – David McCormack – McCormack wasn’t great when he was out there – he missed two bunnies, turned it over three times and fouled twice. But he was only out there 10 minutes, which both benefited him big time from a load management perspective and kept him from finding any kind of a groove. Didn’t matter. He wasn’t needed. He will be moving forward and he knows it. Nothing that happened — or didn’t happen — on Thursday changed any of that.

8 – Remy Martin – Remy had some rough moments on Thursday, but he also had two takes to the basket that made you stop and go, ‘Huh. Could he? Maybe? Huh.’ He looked jet-quick and as confident as he has looked in months. While that likely won’t mean more minutes on a regular basis, simply because the overall body of work continues to be a mixed bag, it could give Kansas — and Remy — confidence if the Jayhawks need him at any point in the next few weeks. Eventually, the season will be over, Martin’s time at Kansas will be through and we’ll stop beating this dead horse and analyzing this topic to death. But because Martin’s potential — in the good moments — is still so high, you can’t help but wonder if he’s going to help this Kansas team before it’s all said and done. If he doesn’t, big whoop. If he does, well then…

9 – Zach Clemence – We’ll give Clemence the top billing of the final three here for two reasons — first, that nifty reverse layup where he really showed off his athleticism; and, second, trying so hard to get the ball to Conner Teahan for the 3-pointer he buried late in the game. That’s good-teammate stuff right there. And Clemence, who played a few valuable minutes in the first half on Thursday, has a lot of that in him. He finished with just the 2 points in this one but added 3 rebounds, 2 assists and a block in 7 minutes. Like most of KU’s deep reserves, he continues to show that he is able to stay ready whether he thinks he’ll be playing or not.

10 – Joe Yesufu – Made just 1-of-4 shots and turned it over once, but he hit the glass hard, played 17 minutes and is the type of player whose effort you never have to question. Whether he executes or produces is up in the air on most nights. But if he doesn’t, it won’t be because he wasn’t giving great effort. I still don’t think we’ve seen the best of Yesufu from a defensive perspective yet. He might well still get a chance to show it, too.

11 – KJ Adams – Dished 2 assists while operating as some type of point forward in the game’s final minutes. And he looked good doing it. On this team, that will never be required or asked for. But it was cool to see it and it speaks to the bright future that Adams has, with all of that athleticism he possesses.

Right??? Remy had those two nice takes but that didn't cancel out the three terrible turnovers where he literally tossed the ball either out-of-bounds or into impossible to catch situations for his squad mates.