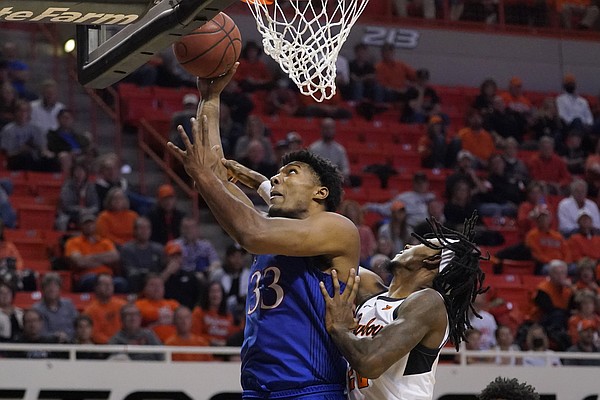 1 – David McCormack – You can’t ask for a much better response to a challenge from the head coach than the one Dave delivered on Tuesday in KU's 74-63 win over Oklahoma State in Stillwater. 17 points, 15 rebounds, 23 minutes and even getting a little bit of his swagger back. The Jayhawks played through him a lot in the second half and he looked comfortable carrying that load again. The big question now is if he can maintain it from here. But he certainly looked like he found that free mind and free spirit he talked about all last season.

2 – Ochai Agbaji – KU’s leading scorer got the team off to a terrific start, scoring 11 points in the game’s first 7 or so minutes. He cooled off from there and he did his part to contribute to KU losing the lead in the first half. But he also hit three 3-pointers, played through foul trouble and made 3 of 4 free throws.

3 – Christian Braun – If you just look at his final line, you might think Braun deserves to be even higher — 15 points, 6 rebounds, 6 assists and 5-of-11 shooting. He made some clutch buckets in the second half and hit 2 of 3 from 3-point range and 3 of 4 at the free throw line. The three turnovers weren’t ideal but also weren’t terrible given the opponent’s strengths and the atmosphere.

4 – Jalen Wilson – He made just 1 of 6 shots and turned it over twice, but both get a pass because of his work on the boards. Wilson, like McCormack, was a mad man on the glass, ripping down 15 rebounds to match McCormack’s career-high by tying his own in the category. Wilson played 26 minutes and seemed to have an opportunity to step up with the status of the 5 spot in flux and Remy Martin coming back from injury. But he never found his scoring touch and instead went to work on the glass, which he has shown a true love for during the past two seasons.

5 – Remy Martin – Back from a one-game absence because of a knee injury, Martin moved well and said after the game that the sore right knee was not a factor. Called out by Self after the game for still being a little too unselfish at times, Martin made a couple of clutch buckets in the second half to essentially put the game away and finished with 7 points on 3-of-6 shooting, but also added 4 turnovers to go along with 3 assists. All in all, the only thing that mattered to Martin after the victory was that his team won. He truly does not seem to be concerned about personal stats.

6 – Dajuan Harris Jr. – His lunging steal late in the game after turning it over was called by Self the best play anybody has made all year. And it was one of 3 steals by Harris on the night. Outside of that, the KU point guard shot just 2 of 7 from the floor but he did dish 4 assists in 31 minutes. There were moments when Self went to Harris off the bench during a breather to try to calm the offense down. But he, too, fell victim to OSU’s pace and pressure after a pretty good start.

7 – Mitch Lightfoot – Lightfoot was solid in the game’s opening minutes in his first start of the season. But he gave way to McCormack in the second half and finished with 6 points and 4 rebounds in 15 minutes. It seems like Lightfoot and McCormack are all-in on supporting each other and trying to push each other to deliver what this team needs from the 5 spot. They don’t care who gets the stats only that the KU bigs get close to that magic number of 20 poitns and 12 rebounds that Self said he’d like from the 5 spot each game. On Tuesday, they more than covered it, combining for 23 points and 19 rebounds.

8 – Jalen Coleman-Lands – During KU’s run to re-take control in the second half, Coleman-Lands hit two huge 3-pointers. He finished with 6 points on 2-of-4 shooting and played 14 minutes on a night that Self played just eight guys. The fact that Coleman-Lands was one of the eight tells you where he’s at in the rotation.

These KUsports.com ratings are awesome! Very thoughtful perspectives. I know a lot of compressed study goes into it.

You do have to wonder just how high Cole-Lands would fare if he had minutes on par with most starters. He just looks so good out there, I am always glad to see him shoot the ball.

Matt, can you tell me how to find the equivalent Stephen F Austin KU ratings/rankings article? I still have not been able to see it pop up in any of the article feeds since the game. I was thinking Braun would have caught up with Agbaji if those tallies were factored in.

I was looking for that rating too, definitely was not posted

After double checking the box score I am not sure how Agbaji rated over Braun in this particular game. Braun produced more and was more efficient offensively and had three times the number of rebounds along with a steal. He also had a +17 +/- as opposed to a -5.

Can you explain the reasoning for this choice? Was it simply the hot start by Agbaji?

Good question, Mike. It seems I might've given a little too much weight to Agbaji's start. Braun's numbers were better (although the extra turnover hurt that a little) and he was very good in the second half. I did like the way Agbaji started though and I also thought it was cool to see him play through a little bit of foul trouble, which is probably a case for his teammates as much as it is for him since they survived and actually increased the lead with him on the bench.

If I had it to do over again, I'd probably flip them. But what's done is done and it's only the difference of 1 point in the overall rankings.

Thanks for the question!

Correct. It was not posted (I missed the game to be in one of my best friends' wedding) but I did watch the replay of the game a couple days later and added in the rankings for that one to the final tally so everything would stay current.

So the current standings are a reflection of all 13 games so far.

Thanks for following along!