Lightfoot, Coleman-Lands take top 2 spots after strong showings off the bench in 76-67 win over George Mason 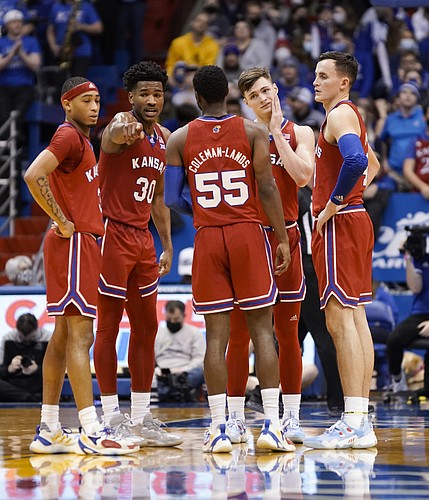 The Jayhawks come together in a huddle during at timeout in the second half on Saturday, Jan. 1, 2022 at Allen Fieldhouse. by Nick Krug

1 – Mitch Lightfoot – It wasn’t just Lightfoot’s 7-of-7 shooting performance that made him stand out in this one. It was also how poised he looked and how much smoother things ran while he was out there. All of a sudden, entry passes hit the right hands and turned into baskets and the spacing and flow of KU’s offense looked like clockwork. He missed two free throws — either of which would’ve given him a new career high — but outside of that he was terrific.

2 – Jalen Coleman-Lands – The senior transfer fouled out and was a little slow to get started. That’s the only thing that kept him out of the top spot today. Otherwise, he, too, was sensational on a night when KU needed him to be. He made 7 of 9 shots from the floor, including 5 of 6 from 3-point range. The lone miss from deep came after the defender forced him to double-clutch before releasing it, or that too might have gone in. The most interesting thing to watch from here will be how close JCL can come to replicating what he did on Saturday in fewer minutes moving forward. If the minutes don’t dip, that’s a terrific sign that he figured it out and things fully clicked.

3 – Christian Braun – Led all players with 6 assists (against just one turnover) and made all six of his free throw attempts, which turned out to be much bigger than anyone probably would have thought at 8 a.m. Both of those realities, along with another high-energy start and 36+ minutes on the floor more than made up for his 3-of-12 shooting performance.

4 – Ochai Agbaji – Scored a season-low 11 points and shot just 4 of 14 from the floor. That included a 2-of-7 clip from 3-point range. He was out there for 37+ minutes and did tie for the lead the team with 7 rebounds, so he still found a way to make an impact, which, in the long run, might wind up being good for both him and this team.

5 – Jalen Wilson – Had a few more shots fallen, it would’ve been a third consecutive strong outing for Wilson. Instead, he hit just 3 of 9 from the floor and missed all five 3-point tries. He did grab 7 boards and found a way to score 8 points. There was even one drive to the rim that looked an awful lot like 2020-21 Wilson. The storyline was there for him to have a huge day while starting in place of Remy Martin, who sat out with swelling in his right knee. But it did not quite materialize.

6 – Dajuan Harris Jr. – Made 2 of 6 shots from the floor and misfired on all three 3-point tries. Beyond that, he dished just 3 assists and turned it over twice. He also struggled with frustration after his four fouls. Not his best game by any means, but not anything to worry about either.

7 – KJ Adams – Scored 2 points after making his only shot attempt and again found himself in the right spot at the right time while making the right play at the end of the first half. After scooping up an errant inbounds pass by GMU, he had the presence of mind to pitch it ahead to a sprinting Braun, who got to the rim before the buzzer to give KU two more points before halftime. Adams’ knack for making the smart/correct play already seems to be a strength. The next step is to do it without having to think. If that happens, the minutes will come.

8 – Joseph Yesufu – Showed glimpses of the defensive pest he can become and wants to be and he finished a tough layup in transition after a steal. He still made a few too many mistakes, still looks to be in his own head too much and played just 10 minutes. But there were baby-step signs of progress.

9 – David McCormack – Simply put: It wasn’t his day. The effort was there, as shown by the four offensive rebounds, but he missed all three shots he attempted and the misses were so bad that several fans on Twitter said it seemed like twice that many. As a result of his rough night, which included a turnover and issues with holding onto the ball, McCormack played just 10 minutes. To his credit, he never sulked on the sideline and cheered after every basket Lightfoot scored in his place.

Kansas basketball coach Bill Self on his bench, a KU COVID case & fans showing up vs George Mason by KUsports.com

Mitch Lightfoot after his 7-of-7 shooting night vs. George Mason by KUsports.com

KU’s Jalen Coleman-Lands meets with the media after 20-point outburst vs. George Mason by KUsports.com

I think you could say that about most of the games this year for McCormack. At what point is Self going to stop starting him??? I don't know if I've ever seen anyone who's worse at scoring around the basket.

Landon Lucas for one, though he was still a great contributor to team when he was starting.

Coach will stop starting people when they don’t have the potential to be significant contributors to the achievements of the team. It’s gone every way possible in the past. DMac has shown in the past that there’s at least potential. Unfortunately, the alternatives are limited now.

KU’s offense is fine. The defense - is AWFUL. And it starts with the perimeter players. Self has his work cut out.

I don’t think he can do much with this particular batch of underachievers.

There is one thing people seem to overlook about Lucas ,many talked about him missing bunnies ,but he was a strong rebounder.,extra possessions are also important .We won 17 in a row when Lucas got the start ..........On senior day Self said he tried 4 years to replace him but couldnt .......Does that say more about Self or the determination of Lucas .

It was probably McCormack's worst game of his career. Just plain terrible. Thankfully, Lightfoot came in and played like an All-American.

As the season started, I was in hopes that McCormack would finally be an all-star center. But, that just hasn't proven to be the case. Maybe it's time to have Mitch be the starter, and let McCormack just come in at the end of successful games.