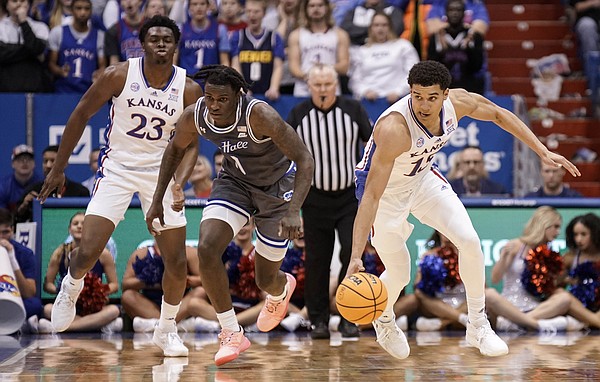 Kansas guard Kevin McCullar Jr. (15) pushes the ball up the court against Seton Hall during the second half on Thursday, Dec. 1, 2022 at Allen Fieldhouse. by Nick Krug

1 – Kevin McCullar Jr. – Kansas coach Bill Self said after the 91-65 win over Seton Hall that it was McCullar’s most efficient offensive game as a Jayhawk. But you didn’t need to hear from the head coach to realize that. McCullar was sensational in this one, playing within himself and letting the game come to him better than at any point so far this season. That led to a more relaxed player. That led to more smooth looking jumpers (many of which went in). And that led to an effective night on the defensive end, as well. In short, that’s the recipe for how McCullar should want to play as a Kansas Jayhawk. Even with a groin injury keeping him out of Monday’s win over Texas Southern, he still played 35 minutes on Thursday and looked great in nearly every one of them.

2 – Jalen Wilson – Wilson wasn’t perfect in this one. He made just 5 of 13 shots and even missed two free throws with three turnovers. But he was on with his shot early and he finished the game with a double-double of 15 points and 13 boards. I don’t care who you are. If you can put up numbers like that, your coach, your team and your fans will take it. The best part about Wilson’s “off” night was that it had no negative effect on the rest of his team. In fact, most of the players on the KU roster had one of their best offensive nights, so that’s a sure sign that Wilson’s inefficiencies were just that and did not turn into him hunting more shots or hogging the ball.

3 – KJ Adams – Adams’ night was way better than his line indicates. He had 11 points and 3 rebounds, but he also finished with 3 steals and looked great in KU’s offensive sets. He rolled hard, screened hard and finished strong. At one point, he had seven consecutive points for the Jayhawks and that came without him even really looking to score. He’ll do more of that the more comfortable he gets with his exact role. And when that happens, the sky will be the limit for how this team can use him and what he can contribute. The good news is they’re never going to need him to score big. But they could stand to have him be another double-double threat on any given night and it sure looks like he’s getting there.

4 – Dajuan Harris Jr. – He scored 10 points on 5-of-6 shooting and added 7 assists and 3 steals with just 1 turnover. On many of his five makes, it looked like he had no business scoring, but he’s just so smart and so good with his body positioning that he knows how to finish tough shots and does it routinely. Self was less than pleased with Harris’ three fouls — and at least two of them were pretty careless — but that’s not hard to emphasize and correct.

5 – Ernest Udeh Jr. – While Thursday was McCullar’s best offensive game as a Jayhawk, it might also have been Udeh’s best all-around game. He made all four shots, hit both free throws he attempted and looked more confident and less lost. He still has plenty of work to do to become the consistent force the Jayhawks want and need him to be. But the team has just two games in the next 16 days, so there’ll be ample time for him to gain on that in practice. He definitely could contribute more than two rebounds, but on a night when two of your teammates combine for 23, there aren’t a ton more to go around.

6 – Gradey Dick – Here’s the thing about Dick that’s going to be the key for the rest of the season and possibly the rest of his Kansas career – it will be his defense that determines whether he has a good night or a bad night. We already know he can score in bunches. And we’ve seen how crafty and creative he can be in making shots. But KU needs him to improve defensively in order to make sure he’s on the floor long enough against Big 12 competition to be that kind of a weapon. He’ll work at it. And it’s hard to imagine him not making progress as the season moves along. The question will be how much progress can he make? To that end, he scored his 15 points in just 26 minutes on Thursday night.

7 – Joe Yesufu – Yesufu took one really terrible shot in this game and Self let him know it. And then he made three of the other five he attempted and looked decent in his 14 minutes on the floor. It wasn’t anything close to how he played in a starting role the other night. But I don’t think that’s what he should be chasing. Yesufu’s goal should be solid, not spectacular.

8 – Zuby Ejiofor – Recorded 2 points and a steal in 8 minutes on the floor, but was overall pretty quiet. Some of that had to do with Udeh’s loud night, and it worked out because the Jayhawks did not need him to do a whole lot in this one.

9 – MJ Rice – Rice followed up his 19-point outburst the other night with a 5-point dud in 13:25 of playing time on Thursday. Almost none of his minutes were meaningful and he didn’t look nearly as turned up and loose in this one as he did against Texas Southern. He’s young. Just like Udeh. That’ll happen. And these next couple of weeks of practice time should help him develop some confidence that can lead to consistency on the court.

10 – Zach Clemence – Not a lot to write home about with Clemence in this one. He played six minutes, missed his only shot and grabbed one rebound and one foul. After the game, Self talked about Clemence’s time out because of injury and limited practice time because of the schedule really hurting him and also not being his fault. It’s hard to know what could make it click for the sophomore big man, but he’s competitive enough to stay after it.

Kansas coach Bill Self in an efficient offensive night for the Jayhawks vs. Seton Hall by KUsports.com