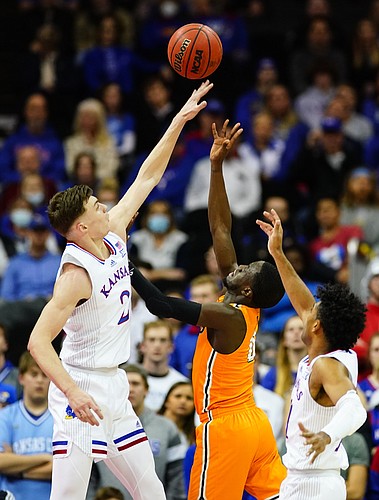 Kansas guard Christian Braun (2) tips a shot from UTEP Miners guard Souley Boum (0) during the first half on Tuesday, Dec. 7, 2021 at T-Mobile Center in Kansas City. by Nick Krug

1 – Christian Braun – Set the tone for the entire 78-52 win with his relentless effort and energy early, which included a couple of dunks and easy buckets in transition. Braun finished with 20 points on 9-of-13s hooting from the floor, adding six rebounds, a block and a steal to his final line. His four-game surge has now become five.

2 – Ochai Agbaji – Led the Jayhawks in scoring yet again, finishing with 23 points on 9-of-12 shooting, including a 2-of-3 clip from 3-point range and a 3-of-4 effort at the free throw line. He added five rebounds and three assists. Christian Braun's effort and energy are off-the-charts good right now. But Agbaji is still the guy you go to when you need a bucket and the guy teammates count on to deliver.

3 – Dajuan Harris Jr. – Harris picked up three steals in the game’s first few minutes and tied a career-high with four on the night. He did not score and shot just one time. He’ll still have to get better in both of those areas in order for Kansas to maximize its potential. But that kind of effort defensively, which instantly frustrated the UTEP ball handlers, can have a huge impact on any game.

4 – Remy Martin – Scoreless in 23 minutes, but not because he was off. Rather, he just passed up a bunch of shots. KU coach Bill Self called it “unselfish to a fault sometimes,” but Martin’s emphasis seemed to be on defense and it showed in a better on-the-ball effort and two steals. His behind-the-back near-assist to David McCormack in transition was a near Top 10 play. But McCormack couldn’t finish the play.

5 – David McCormack – Got going early but played just 17 minutes total after tweaking his ankle midway through. McCormack finished in close on a couple of early possessions and was more of a defensive presence for most of the minutes he was on the floor. Not the huge step the St. John’s game was, but not a step back either.

6 – Mitch Lightfoot – Eight points and four rebounds in 13 minutes off the bench. He also played without unnecessary fouls and did not miss a shot, knocking in all three field goal attempts and both of his free throws. Lightfoot has fully established himself as a critical part of KU’s 7-8 man rotation.

7 – Jalen Wilson – He made his first 3-pointer of the season but still shot just 1-for-5 on the night. Take the good with the bad, I guess.

8 – Jalen Coleman-Lands – Made a couple of shots, which was a positive step, but didn’t exactly look great doing it. As Self pointed out after the game, Coleman-Lands still pounds the ball a little too often while hunting shots. His role needs to be simpler than that. Move the ball, get open, pull the trigger on open looks and give max effort on defense. He knows that. He just needs to find a way to get a little more comfortable and consistent doing it.

9 – KJ Adams – Played just six minutes but finished with four points and two rebounds. Those aren’t numbers that will set the world on fire, but they are important when you consider the fact that Self’s still in search of another player or two he can count on consistently off the bench.

10 – Zach Clemence – Clemence had a weird line. In addition to getting in late in the first half, he grabbed four rebounds (two offensive) but also missed his only shot attempt and turned it over once to go along with a steal, a block and

11 – Joseph Yesufu – With Bobby Pettiford out of action, Yesufu had a great chance to show he’s ready for more minutes. Instead, he played just 10 total, with nearly half of them coming in the game’s final few minutes, and missed both shots he attempted with one assist and two turnovers.

Did one of these ratings come out on the subsequent SFA game? I wonder if a posting snafu occurred after it was already prepared.